Especially Karan Soni, the taxi driver who shrieks like a 12 year-old girl when alarmed. Posted 25 months ago (“What If The Antichrist Wasn’t A Person But A Movie?”): “Anyone who goes to Deadpool and comes out saying ‘wow, that was pretty good!’…70% contempt, 30% pity. You don’t like good action, you don’t like craft, you don’t care about that thing that the Russo brothers have in spades and that Deadpool helmer Tim Miller will never, ever have. All you care about is sinking into another jizz-wank hot tub that reenforces your glib bullshit attitudes about superhero movies…you’re as low as it gets in the movie-watching (or more accurately movie-sampling) realm.”

In Peter Medak‘s overlong but delightfully insane The Ruling Class (’72), Peter O’Toole plays two versions of Jack, the 14th Earl of Gurney. During the first 65% he plays Gentle Hippie Jack, a golden-haired mystic given to silly riddles and looney non-sequiturs. All kinds of ridicule and pressure are brought to bear by elite British society, and somehow Jack crumples from within and, just like that, becomes an ultra-conservative, homicidal, knife-wielding fiend — a chilly, well-dressed psychopath who fits in much better with the swells. Nobody wanted to see a film about a Jesus impostor morphing into Jack the Ripper, and so The Ruling Class was a complete financial bust. But O’Toole’s madman scream…my God! Not to mention the “Varsity Drag” number.

Debra Tate, the Palm Springs-residing sister of the murdered Sharon Tate, has described herself as a “vocal opponent” of Quentin Tarantino’s Once Upon A Time in Hollywood.

The Tarantino drama, which starts shooting this summer, will use the 1969 Manson murders as a backdrop to a story about a pair of struggling actors, to be played by Leonardo DiCaprio and Brad Pitt. It’s presumed that Margot Robbie will play Sharon Tate. And Tate’s 65-year-old sister is pissed, she told Vulture, because Tarantino has “yet to reach out to me to talk to me about anything to do with my sister or her depiction in his film. Why? Because I believe it’s negative. If his depiction was positive, he’d have a dialogue with me.”

Wrong! Tarantino doesn’t do research. He doesn’t do realism or history. Everything he’s ever written and directed has been pulled straight out of his ass.

Posted last July: “As intriguing as this project sounds, Tarantino is incapable of playing it even semi-straight. He’s not a docu-dramatist — he’s a creator of alternate Quentinworld fantasies. His last three films have mined the past — Inglourious Basterds, Django Unchained and The Hateful Eight — and each time he’s reimagined and re-dialogued history in order to transform his tales into his own brand of ’70s exploitation cinema. Why should QT play his cards any differently with the Manson family?

“Variety‘s Owen Gleiberman said this morning that location-wise he wants Tarantino to deliver an exact duplicate of everything we know about the Manson geography (Spahn ranch, Haight-Ashbury, etc.) but ‘make it feel new.’

Nobody cares what I think about Wes Anderson‘s Isle of Dogs (Fox Searchlight, 3.23), which opens tonight. I’m not even sure I care all that much, and I’m sitting right here. Anya and Yanna are staring at me now, and their eyes are saying “well…?”

Okay, I’m an animation hater — I admit that. But Isle of Dogs isn’t “animation” — it’s an extremely refined Wesworld realm by way of immaculate stop-motion canines — so exacting, so detailed, so balanced and dead center. And defined by an intense fixation upon (a) Japanese culture, (b) mountains of smelly garbage (white worms, fleas, half-eaten dumplings, piles of empty Sake bottles…thank God it wasn’t projected in Aromarama) and…I’m getting off on the wrong track there. I sound negative, but I didn’t honestly feel that way as I watched it. I felt respectful but distanced, and that’s not a bad thing per se.

Isle of Dogs is a tidy fable about good, soulful dogs joining forces with good, thoughtful humans in order to push back against the schemes of ugly, scowling humans. It’s about calmness, humanity, compassion and love. I was glad I was there last night (inside theatre #1 at the Westside Landmark) but I wasn’t…how to say this the right way?…enormously transported in a deep-down sense as much as technically impressed by how exactingly composed it all is.

Loved the Japanese drums! The drums are 90% of Alexander Desplat‘s score.

It certainly feels like another realm, this creation, this latest visit to Andersonville. You don’t feel as if you’re watching a movie as much as visiting a stop-motion art exhibit in a museum with seats.

So I couldn’t quite fall into Isle of Dogs but I was telling myself (and I mean this right now) that I might have really enjoyed it if I’d dropped a tab of LSD a half-hour before it began. Except I haven’t dropped acid since my early 20s, and if I’d actually done that last night…uhhm, I’d better not think about this any more. But Isle of Dogs is an LSD movie of sorts.

I admire the effort that went into it, and the devotion of incredible focus and discipline that it demanded of Wes, or should I say vice versa? There’s no way to put it down (and I wouldn’t want to do that anyway) except to say (a) I was unable to lose myself in it and yet (b) I studied it very closely and (c) was never less than politely fascinated.

Well, it is a dog movie so naturally the dogs are going to converse in the director-screenwriter’s native tongue, and with erudite, English-speaking dogs being the basic template of comprehension it wouldn’t make a lot of sense to subtitle the Japanese (i.e., the only humans except for Greta Gerwig‘s Tracy Walker, a visiting activist American), and the only way to avoid that would be to have the Japanese speak English with Japanese accents, which would be ridiculous.

The mystery of Stephen Paddock, the rich looney tune who murdered 58 people in Las Vegas on 10.1.17, will apparently stay a mystery. If he was merely suicidal, why murder dozens of innocent people before offing himself? He was obviously a sociopath, but not the sort who stirred attention or concern. Paddock probably wasn’t all that different from Andreas Lubitz, the nutbag airline pilot who decided to fly that Germanwings jet into a mountain on 3.24.15, and in so doing murdered 144 passengers and crew. Or the maniacal pilot or co-pilot behind the disappearance of Malaysia Airlines Flight 370 on 3.8.14, which caused the deaths of 239 passengers and crew. Absolute madness, impenetrable insanity…no answers.

In an interview yesterday (Wednesday, 3.21) with CNN’s Christine Amanpour, Cate Blanchett was asked how she squares her support of #TimesUp with being silent about the re-ignited allegations against Woody Allen.

I’ve posted Blanchett’s response as well as a video of the interview, but boiled down she basically said (a) I haven’t been silent about Woody, (b) I knew nothing of [Dylan Farrow‘s] renewed allegations at the time of filming Blue Jasmine, (c) the issue has been handled by “the courts” (i.e., investigated twice by two state agencies, Connecticut and New York, resulting in a decision not to prosecute for lack of evidence and an element of doubt), and (d) “I’m a big believer in the justice system” so do the math. 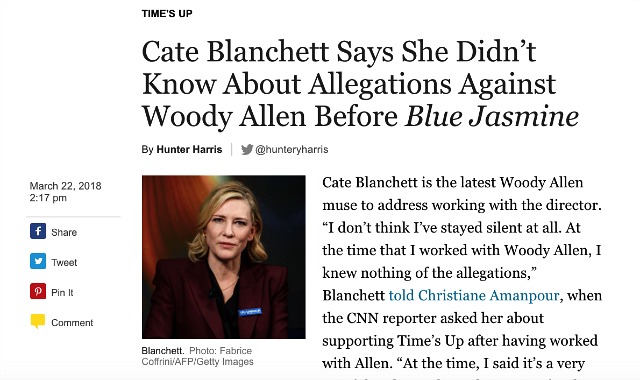 What Blanchett said, in essence, amounts to an oblique defense of Woody. She said if evidence comes to light that warrants prosecution then a prosecution should result, but if the evidence isn’t there…well, you know, maybe the Robespierres should settle down, take a breath and direct their energies elsewhere.

I’m guessing Blanchett would like to say more, but given the social media pressures, she can’t. In case there was any misunderstanding about her views, Blanchett said that social media is great for raising “awareness about issues,” but it’s “not the judge and jury.”

The Vulture guys ran a real Robespierre headline a couple of hours ago, to wit: “Blanchett Says She Didn’t Know About Allegations Against Woody Allen Before Blue Jasmine.” That is not the gist of what she said to Amanpour, assholes. That is a fragment of what she said. This is one of most full-of-shit, deliberately misleading headlines I’ve read in a long while. The author of the Vulture story is Hunter Harris.

“I don’t think I’ve stayed silent at all,” Blanchett told Amanpour. “At the time that I worked with Woody Allen, I knew nothing of the allegations. At the time, I said it’s a very painful and complicated situation for the family, which I hope they have the ability to resolve. If these allegations need to be reexamined which, in my understanding, they’ve been through court, then I’m a big believer in the justice system and setting legal precedents. If the case needs to be reopened, I am absolutely, wholeheartedly in support of that.”