Support on Patreon Follow @wellshwood
34 Comments
“What Happens When A Man Goes Through His Own Portal?”

All hail Spike Jonze‘s Being John Malkovich, now 18 and 1/2 years old. I haven’t seen it in almost that long, but I’ll be watching it again this weekend. From Janet Maslin’s N.Y. Times review: “Without spoiling what follows, let’s just say that Being John Malkovich features a fine cast of dryly comic actors who are very much in on the joke. That can even be said of Charlie Sheen, who turns up for some wicked self-parody in a film that also features cameo appearances by Sean Penn, Brad Pitt and the New Jersey Turnpike.” Pitt has a cameo in this?

If Isle of Dogs makes one thing unmistakably clear, it’s that director-cowriter Wes Anderson truly adores Japanese culture. The food, the clothing, the ancient drums (“taiko”), the language, the architecture….you can just feel how much he enjoys the immersion.

How strange, then, that Wes is getting beaten up for not enjoying Japan in the right way. Or, more to the point, in the wrong way. His crime, it seems, is (a) not using subtitles when his Japanese characters speak and (b) creating a blonde American activist character, Tracy Walker, voiced by Greta Gerwig, who plays a significant role in bringing about the rescuing and re-acceptance of the Trash Island dogs. What didn’t he invent a fucking Japanese activist instead?

The crime is cultural appropriation, and at least four name-branders have been slapping Wes around for this since yesterday — L.A. Times critics Justin Chang and Jen Yamato, Slant‘s Steve McFarlane and Washington Post critic Ann Hornaday.

Anderson’s reply: “The movie is a fantasy, and I would never suggest that this is an accurate depiction of any particular Japan…this is definitely a reimagining of Japan through my experience of Japanese cinema.”

Roughly ten months ago (or around 5.10.17) the Cannes Film Festival announced that Netflix releases would not be screened in competition at the 2018 festival and beyond unless, you know, Netflix changed its mind about sidestepping theatrical and opening straight-to-streaming. Netflix never changed its mind and so, just to underline last year’s announcement, the no-no Netflix policy has apparently been re-announced or at least re-filed by The Hollywood Reporter‘s Rhonda Richford.

Cannes honcho Thierry Fremaux has said that the streamers (Netflix, Amazon, Apple, Hulu) can show their films out of competition during the festival, but those who sidestep theatrical exhibition can’t win a Palme d’Or.

Amazon is not at all in league with Netflix on this issue. As a friend points out, “Every single one of Amazon’s films gets a full-scale theatrical release with the minimum 90-day window required to play in the major chains before going to VOD — and are sold to local theatrical distributors all over the world, and for this reason can play in competition at Cannes.”

Due respect and no offense, but I couldn’t help but flinch when I heard Richford say “Cannes”, which should be pronounced “caahhnn” but which she pronounces in the usual American way — i.e., synonymous with “tin can” or “Dan Rather” or “Peter Pan.” Listen to her pronunciation — it’s not way off but it’s not right either. I’m sorry but I can’t let this stuff slide.

For a woman just turning 47 (her birthday is today), Karen McDougal looks pretty great. Genes, diet, exercise, “work”. McDougal, an admitted conservative who says she voted for Donald Trump and may even approve of his handling of the Presidency so far, is almost exactly eight years older than Stormy Daniels, 39, whose birthday was six days ago.

Stormy’s affair with Trump happened 12 years ago, when she was 27. McDougal’s relationship happened around the same time, between ’06 and ’07, when she was in her mid 30s.

Class, character and poise-wise, McDougal strikes me as a level or two above Daniels, who seems…what, a bit scampier? On the other hand Daniels seems to have a better sense of humor about the media circus that she’s performing in. She seems to grasp the vaguely comedic aspects, I mean, while McDougal sounds seriously guilt-ridden (“I know it’s wrong…I’m really sorry”). Her big emotional moment starts at 11:15.

McDougal and Daniels have both spoken with Anderson Cooper for the money, of course. Not direct payment for sitting down and sharing intimate details of their relationship with Orange Orangutan, but for the money they’ll probably earn in one way or another down the road. (Right?)

The Stormy chat won’t air until Sunday on 60 Minutes, but she looks seriously pissed when Cooper says “I guess I don’t know why you’re doing this.” There’s a very slight note of disdain in Cooper’s voice and facial expression when these words pass his lips. 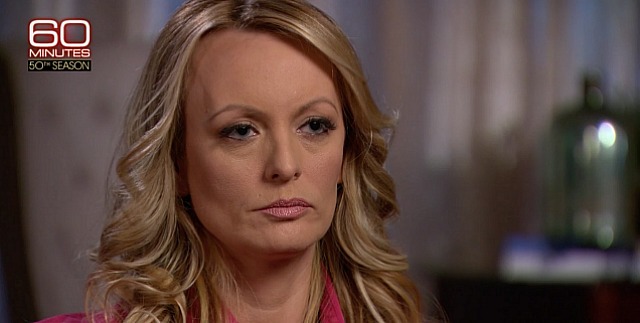 Distributors always hire security goons to stand on the side aisles at early-bird screenings and eyeball the viewers, sometimes with the aid of ultra-violet binoculars. The idea is to discourage jerks from video-recording a scene or two on their smartphones. I understand why distributors have invested in this (why take chances?), but has anyone at an invitational or all-media screening ever tried to surreptitiously record a portion of a new film? And if one or two have been stupid enough to attempt this, have their haphazard video capturings ever shown up on YouTube or been of any interest to anyone?

I’m mentioning this because one of these big guys was standing a few feet away during a screening of Wes Anderson‘s Isle of Dogs the other night, and dammit, he was too close. I felt as if he was interfering with my contemplative movie space. I want to sink into a meditative trance when I watch a film, and that means (a) focusing solely on the screen and (b) not seeing some six-foot-five, Dwayne Johnson-type guy out of the corner of my left eye, staring a hole in his scrambled eggs as he laser-visions my ass. Hey, homey…get offa my cloud! This is entirely between me and Wes and the stop-motion dogs, and I’m sorry but three’s a crowd when it comes to this kind of intimate communion. I mean, I could almost feel his body heat.

Last September Cannes Film Festival honcho Thierry Fremaux announced that he was thinking about changing the timing of gala and press screenings. And now he’s done it officially.

Instead of critics seeing films first in the Grand Lumiere at 8:30 am with black-tie gala screenings occuring later that day around 6 or 7 pm (or with Salle Debussy press screenings at 7:30 pm followed by gala screenings the next day), Fremaux said he wants gala and press screenings to happen simultaneously. That way critics, who always tweet immediately and then post reviews four or five hours after press screenings, won’t be killing the buzz on dicey or questionable films hours before they screen for the swells.

If a movie is said to be great or very good or mezzo-mezzo or shitty, the word always gets out right away in Cannes. But at least the new simultaneous screening policy means that viewers in tuxedos and gowns will henceforth see films without knowing what the often crabby critics have already said.

Critics and journalists will catch films in the Debussy theater at the same time that guests inside the main auditorium watch the evening world premieres. Fremaux told Le Film Francais that removing the early-buzz factor from morning press screenings will “revamp the attractiveness of and gloss to gala evenings…at 7 p.m., the press will see the film at the same time at Debussy, [and] the suspense will be total!”

As for films premiering at 10 pm, the press will catch them the next morning. Afternoon screenings of films selected in competition or Un Certain Regard will mix industry-ites, journo-critics and locals.

Producers are mostly happy with this new arrangement, to go by trade articles. Critics will now have to bang out some of their reviews between 10 pm and 1 am, in addition to all the other deadlines and pressures.