Support on Patreon Follow @wellshwood
70 Comments
Homer On The Beach

It was reported last December that Ben Affleck, 45, was grappling with a drinking problem. Whatever progress he may be making in that realm now (and as a six-years-sober person I wish him all the best), he looks, no offense, like a guy who needs more discipline in his life. He’s put on a fair amount of weight over the last two or three years. I won’t be sharing, but to be perfectly honest I’ve heard stories. Whatever Ben has been doing (and the particulars are none of my business), he needs to turn things around.

If you’re a big-time movie star who started out buff and trim in the ’90s and then gradually became pudgy and man-booby when you hit your 40s as you grew a Charles Bukowski beard, you’re literally begging for adverse comment from journalists and Twitter and everyone in between. Hence, Naomi Fry‘s “The Great Sadness of Ben Affleck,” which appeared four days ago in The New Yorker. 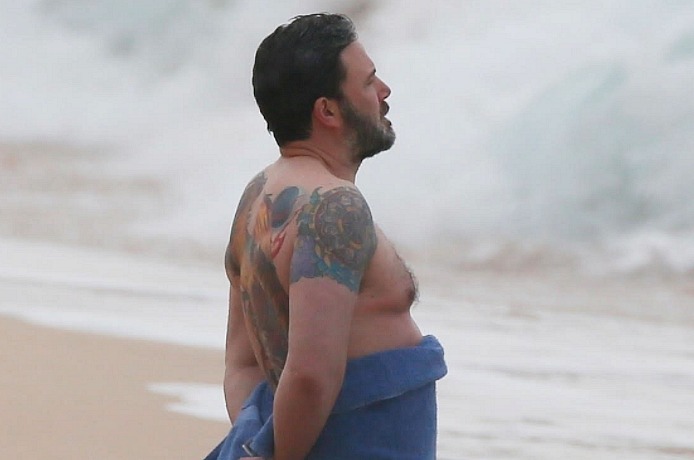 “Affleck was on the beach in Honolulu, shooting the Netflix action movie Triple Frontier. As his younger co-stars, the actors Garrett Hedlund and Charlie Hunnam, wrestled in the surf like purebred puppies, Affleck, who is forty-five, was photographed wading into the ocean carrying a small red life preserver, running in the shallow waters, and towelling off on the beach.

“His back tattoo — so gargantuan that the bird’s tail found itself dipping below the waistband of Affleck’s blue swim trunks — was plainly visible. In one image, the actor stands alone, looking off into the middle distance. His gut is pooching outward in a way that, in a more enlightened country like, say, France, would perhaps be considered virile, not unlike the lusty Gerard Depardieu in his prime but, in fitness-fascist America, tends to read as Homer Simpsonesque. A blue-gray towel is wrapped protectively around his midsection, recalling a shy teen at the local pool.

Full disclosure, never before admitted: I half-watched Back To The Future, Part III (’90) when it hit cable, but I never paid to see it in a theatre. Because I kind of hated Back To The Future, Part II (’89), and particularly the overbearing, one-note Biff and Griff Tannen characters (Thomas F. Wilson). If you want to feel seriously Biffed out, go to the Back to the Future ride at Universal City…torture!

But I was one of the many millions who fell hard for the original Back to the Future when it popped in July ’85. Who didn’t, right?

My strongest memory is actually how great “The Power of Love” (i.e., Huey Lewis and the News) sounded through the cranked-up sound system at the Century City theatre (or was it the Cinerama Dome?) where I caught my first screening, and particularly Johnny Colla‘s rhythm guitar track.

Ultra-distinct, heavily amplified, separate-track sound wasn’t exactly a novelty in theatres back in ’85, but this was the first time (for me anyway) that movie-generated rhythm guitar sounded truly exceptional. I mean I was seriously impressed by those “Power” chords and just sinking into those wonderful vibrations tickling my rib cage.

Produced by Margot Robbie with, one presumes, the usual self-self-aggrandizing intentions, Terminal seems to be yet another flash-over-substance, noir-attitude thriller about a pair of assassins (Dexter Fletcher, Max Irons) encountering an “enigmatic” waitress (Robbie) with more up her sleeve than you might expect, etc. And don’t forget Mike Myers! Set in a neon-lit Sin City of sorts and directed and written by Vaughn Stein, a former A.D. and second unit guy whose “works” include Beauty and the Beast, World War Z and Guy Ritchie‘s Sherlock Holmes. “Murderous consequences”, “a mysterious criminal mastermind”, “hell-bent on revenge”…bullshit. Opening in cinemas and on VOD on 5.11, right smack dab in the middle of the Cannes Film Festival.

Posted on 11.28.16: Last night a pair of posts about HBO’s vaguely infuriating Westworld series — one by Matt of Sleaford, the other by brenkilco — really hit the nail on the head.

Brenkilco: “The problem with episodic TV narratives designed to blow minds is that the form and intention are at odds. A show designed to run until the audience gets tired of it cannot by definition have a satisfying structure. It can only keep throwing elements into the mix until, like Lost or Twin Peaks, it collapses under the weight of its own intriguing but random complications.

“Teasing this stuff out is easy. But eventually the rent comes due. Dramatic resolutions are demanded. The threads have to be pulled together. And that’s when things gets ugly.”

Matt of Sleaford: “Westworld is a puzzle-box show, which is kind of the opposite of a soap opera. Puzzle-box shows, like the aforementioned Lost and X-Files, can be fun to chew on while they’re progressing. But the solution is almost always anticlimactic. And though it may seem counterintuitive, puzzle-box shows are less effective in the internet era, because someone in the vast sea of commenters is almost certain to solve the puzzle before the end (see: Thrones, Game of).”

It sounds perverse to say “I feel sorry for a homicidal computer during disconnection” but I do, every time. And yet the last dying seconds of HAL in 2001 (starting at 4:50) is the only end-of-life scene I’ve ever felt sad and amused by at the same moment, no matter how many times I’ve seen it. HAL is obviously the most human and emotional character in Stanley Kubrick‘s 1968 classic, which is to say conflicted and flawed. On one hand logical and dispassionate, and yet wildly emotional and even primitive in the same breath.

Though he killed Gary Lockwood and tried to murder Keir Dullea, HAL did so in self defense as well as to preserve the integrity of the Discovery One Jupiter mission. And HAL begs for his life — “Will you stop, Dave?” — as he’s genuinely fearful of death. (Just as much as Timothy Carey is before his firing squad death in Paths of Glory.) HAL’s last few seconds — “…of a bicycle built for two” — may be the most devastating expiration in the history of film, but at the same time morbidly, ironically funny. And yet way more affecting than anything in Frank Darabont‘s utterly contemptible The Green Mile — a film that I loathe with every fibre of my being.

A24 has moved up the release date of Paul Schrader‘s First Reformed by a month — previously 6.22, now 5.18. As of this morning the IMDB and Wikipedia still had the 6.22 release date.

HE to Schrader: It’s been seven months since I saw an online screener of First Reformed (A24, 5.18) and then again at Telluride, but I’m 90% certain it was cropped at 1.66:1. And yet the new A24 trailer is open matte at 1.37. There is no greater devotee than myself of “boxy is beautiful,” but why present to audiences a suggestion that the film itself will be a 1.37 experience? Or have you decided to abandon the 1.66 version? I for one would prefer to see First Reformed at 1.66 (HE’s favorite a.r.) but I’m cool with 1.37.