I’m not sold on Coralie Fargeat‘s Revenge (Neon/Shudder, 5.11). The trailer suggests a piece of bloody grindhouse exploitation by way of timely feminist pushback. Honestly? I’d rather watch Tony Scott‘s Revenge (’90), even though it wasn’t all that great.

Warner Bros. attempted to develop Jim Harrison‘s original novella, published in ’79 along with two others under the title “Legends of the Fall”, for several years. It finally got made by producer Ray Stark with Kevin Costner starring and exec producing. It finished shooting in late ’88, opened in February ’90.

Most critics panned it. What was the problem? The affair that Costner has with Madeleine Stowe seems selfish and kind of stupid, especially following a scene in which Stowe’s gangster husband, played by Anthony Quinn, hints to Costner that he knows what’s going on and that it might be better to hightail it while the hightailing is good. Costner ignores the offer, and all kinds of bad stuff results.

But it’s still a handsome film, and it has that south-of-the-border, candle-lighted feeling of class and visual pizazz that Scott was always good at.

This shot of The Age of Innocence costars Michelle Pfeiffer and Daniel Day Lewis was probably taken during some Los Angeles publicity gathering. Martin Scorsese‘s much-admired film opened on 9.17.93. (I’m figuring the photo of L.A. Dodgers’ manager Tommy Lasorda indicates a Los Angeles establishment.) If I’m correct Pfeiffer was 35 and 1/2 at the time; Lewis was a year older. They both look so young, so glowing. Especially Lewis compared to that shaved-head, Buddhist retreat appearance he had during publicity for Phantom Thread. 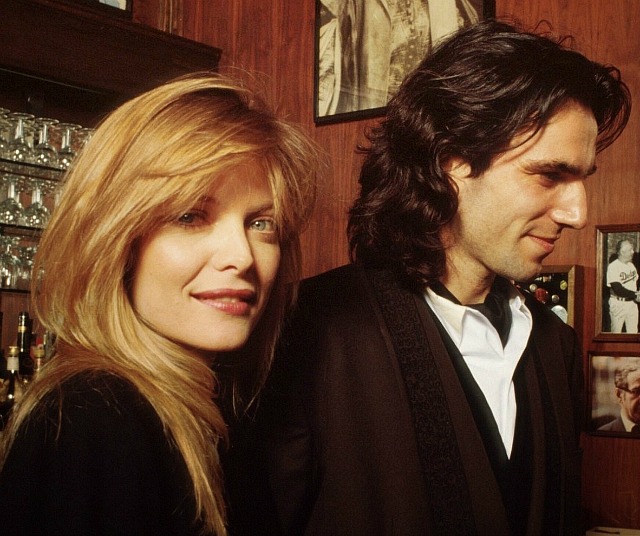 Has anyone ever heard of an old-fashioned idea called “hitting the head before the movie starts so you don’t have to leave during Act Two or Act Three”? Hollywood Elsewhere always takes care of business in this fashion. I almost never take a bathroom break. I don’t want to risk missing anything important.

My theory is that these jerks are coming in with their 48-ounce soft drink containers and pouring it all down within the first 20 to 30 minutes, and so their bladders are bursting 30 minutes later. They try to hold it and finally give up. If I bring a drink into the theatre it’s always the smallest size, and I never take more than two or three sips, and half the time it’s from a water bottle.

24 Comments
In The Wake of John Bailey’s Exoneration

A couple of months ago I would have been too terrified by the Daughters of Maximilien Robespierre to have posted this sensible-sounding message by University of Toronto political science major Josephine Mathias. But last weekend’s decision by AMPAS to dismiss an improper touching charge due to lack of credibility has opened the door.

Having absentmindedly missed last Monday’s all-media at the Chinese, I paid $17 yesterday afternoon to see Steven Spielberg‘s Ready Player One. I came to scoff but came away placated, and even mildly enthralled by certain portions. I would have loved to have descended into a hate pit with this thing but I can’t. At worst I felt pummelled and trampled by the VR realm, but much of the time I was going “ehh, this isn’t too bad.” It really isn’t. Much of it is an almost blinding visual knockout. For what it is, you could do a lot worse than Ready Player One. Strange as this sounds there were times when I actually enjoyed the ride.

Do I have to explain everything? Naah, but it’s basically a VR treasure-hunt movie, blah blah. Find three keys inside the OASIS, which is where everyone youngish seems to “reside” given the exceptionally bleak dystopian atmosphere that permeates “the real world.” OASIS was created years ago by late billionaire James Halliday (Mark Rylance), blah blah. The ultimate find is a glowing golden egg, blah blah, along with piles of Halliday’s money and control of OASIS, etc.

The “High Five” heroes are Tye Sheridan‘s Wade Watts (and his avatar “Parzival”) and Olivia Cooke‘s Samantha Cook (i.e., “Art3mis”), plus three others (Lena Waithe as Helen Harris/Aech, Philip Zhao as Sho, Win Morisaki as Daito). The corporate baddie-waddie is played by Ben Mendelson, and it says something about Ready Player One that I wasn’t irritated by the guy.

I partially agree with Variety‘s Owen Gleiberman that Spielberg’s “dizzyingly propulsive virtual-reality fanboy geek-out” is “an accomplished and intermittently hypnotic movie although you may feel more occupied than invested.” And yet I began to feel fully invested somewhere around the 90-minute mark, or during the final 40 or 45. And like everyone else I especially loved the VR visit to The Shining‘s Overlook Hotel, although I was somewhat disappointed that Jack Nicholson doesn’t appear.

I can’t believe I’m giving a pass to two Spielberg films in a row (this and The Post) and only four months apart. Who am I if not a confirmed “beardo” disser? To paraphrase Dennis Hopper in The American Friend, “I know less and less about who I am. Or who anyone else is.”