The Trumpian right has long regarded blue America — urban, mostly liberal, multiracial, LGBTQ, not especially religious — as a primal threat to their cherished memory of an overwhelmingly white, straight and church-attending America of yore. They consider this threat to be so fundamentally dangerous that they’re pretty much ready to let Donald Trump ignore the rule of law and, if need be, even the Democratic system to squash or stop it. They’re willing to let Trump do whatever the hell he wants, because he’s on their side and that’s all they care about.

“Having a fact-based debate in this culture is becoming almost impossible,” journalist-author Carl Bernstein said last November. “It is not just political but cultural…at all levels in our society…it’s clear to me that something is not working in America today, that the system is straining almost to the breaking point in our journalism, in our politics…partisan assertion, self interest and careerism and ideological warfare at the expense of the national interest.”

On the part of the looney-tune, Trump-supporting right, he means.

Posted on 7.4.14: “The Declaration of Independence, adopted on July 4, 1776, proclaimed that the 13 American colonies were detaching themselves from English rule and were therefore free and independent states — quite a brave thing, raised quite a rumpus.

“The United States of America would not become relatively united and cohesive until after the end of the Civil War, of course, but for 130 years the U.S. of A. at least approximated the idea of a nation more or less bonded by shared beliefs, convictions and social goals. That’s obviously no longer true. Today and beyond the U.S. of A. is impossibly divided and never the twain shall meet. The right has gone totally around the bend. The urban Blues are the Czech Republic and the rural Reds are Slovakia, and I really think it’s time for the Czechs to sign a new Declaration of Independence and cut those bozos loose. Yes, I wrote about this on 3.15.13 but I’m talking about the saddest and most personally screwed-up voters (poor health, obese, boozing, cigarette-smoking, gun-owners, living hand-to-mouth in trailer parks or foreclosed homes, driving gas guzzlers, poorest educational systems, highest divorce rates) who live in West Virginia, Kentucky, Mississippi, Tennessee, Arkansas, Alabama, Ohio, Louisiana, Indiana and Oklahoma…in that order. 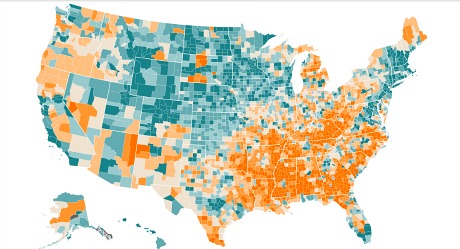