It is axiomatic that trade critics will be as hospitable as honesty allows when it comes to major studio releases, especially those aimed at fantasy geekboys and especially when directed by a legend like Steven Spielberg. And so Variety‘s Owen Gleiberman is most likely fulfilling expectations in his review of Ready Player One, which premiered last night at SXSW.

But even under these conditions OG offers terms like “banal” and “slippery mutating synthetic digital imagery” and — this is probably key — “more occupied than invested.” OG was gripped by RPO, but his review also indicates that the general SXSW reaction (“We’ve found God! The entire crowd was levitating…shrieking with pleasure!”) was over-the-top.

And yet I love hearing that there’s a sequence in which Tye Sheridan‘s Parzival, Olivia Cooke‘s Art3mis and a Shrek-like avatar named Aech visit Stanley Kubrick‘s Overlook hotel.

“In Ready Player One, everything you could call virtual is clever and spellbinding,” he writes, “[and] everything you might call reality is rather banal.” Spielberg’s “dizzyingly propulsive virtual-reality fanboy geek-out” is “an accomplished and intermittently hypnotic movie [but],” he qualifies, “you may feel like you’re occupied more than you are invested.”

“Ready Player One tells a breathless and relatively coherent story — essentially, the future of civilization is riding on the outcome of a video game — but the movie, first and foremost, is a coruscating explosion of pop-culture eye candy. Never is that more spectacularly true than in the irresistible sequence in which [three virtual leads] enter the Overlook Hotel from The Shining.

“The reason they’ve gone there is that they’re trying to track down the woman who James Halliday (Mark Rylance), the disconnected nerd-genius inventor of the OASIS, once had a date with and nearly kissed. It turns out that the two went out to the movies — they went to see The Shining — and as the characters in Ready Player One stroll around on the sets and images from Kubrick’s film, it’s ticklish, after an hour or so of slippery mutating synthetic digital imagery, to envision ‘virtual reality’ as something that’s this iconic and analog and concrete.”

Says Vulture‘s Emily Yoshida: “Is the movie actually good? Well, it’s certainly not bad. Anyone expecting a train wreck from the adaptation of Ernest Cline’s gamer-bait novel must have lost the detail that Steven Spielberg, Hollywood’s Cool Dad, master of functional, crowd-pleasing modern storytelling, was at the helm. It was always going to work, and there are parts that are genuinely dazzling.” 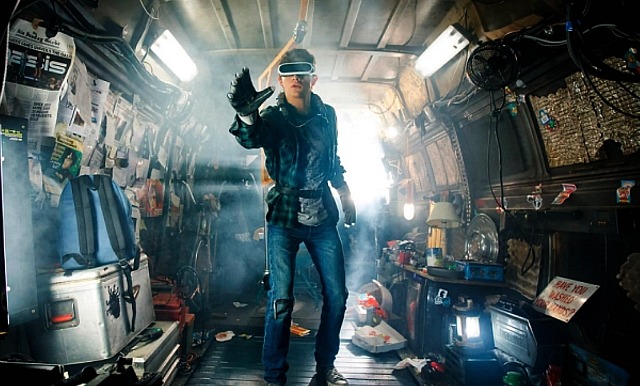