This morning Awards Daily‘s Sasha Stone declared that Guillermo del Toro‘s The Shape of Water “is one of the best films to win the Best Picture Oscar in two decades. It joins the ranks of the best of the best, like No Country for Old Men, The Departed and The Hurt Locker, and perhaps ushers in a new decade of films that will flourish under America’s sudden turn to the dark side.”

The Shape of Water is a partly gentle, partly porno-violent fairy-tale about loneliness and longing and fish-sex, but it’s a genre film and therefore a curio in the annals of Best Picture winners, and it damn sure isn’t one of “the best of the best.” Sasha is crazy for comparing it to The Departed or No Country For Old Men….good God! The Movie Godz don’t read everything but they read Hollywood Elsewhere, and I can tell you they’ll shriek like banshees when they read her piece. And I mean like Michael Keaton in Beetlejuice when Geena Davis tries to say his name three times: “Eeeeeeeeeee!!!”

The Shape of Water is the only creature fantasy to seriously contend for a Best Picture Oscar, much less win one. (Right?) It’s a trans-species love story that cares about the interior lives of marginal people and whatnot, but I’m writing about it now because it’s first and foremost an aberration — a film that won largely because of the New Academy Kidz and their clenched determination to include genre films in the realm of Best Picture consideration, and in so doing shake things up.

I’ve long disagreed with the Academy prejudice that comedies can’t be regarded with the same respect afforded to socially realistic dramas, but there’s no denying that genre films have worked hard for decades at defying general laws of believability and credibility with a kind of “fuck it, we’re a genre movie” attitude.

I’m not talking about scary or horrific films but those which deal their cards according to pulpy, fast-and-loose rules. (Like The Shape of Water.) And I’m saying this, mind, as one who would have completely respected King Kong or Psycho or Val Lewton‘s Cat People or The Night of the Hunter being handed a Best Picture Oscar.

Unlike almost every other Best Picture winner except for six or seven I’d rather not mention, The Shape of Water is more or less indifferent to the world that we’re all unfortunately stuck with, and is a creation that totally resides in Guillermo’s head.

It contemplates nothing except for the eternal condition of loneliness and the need to be loved and the balm of compassion, which we all value. But at the same time it’s not that great because of staggering plot holes and logic flaws. It’s a creature feature that believes in kindness and compassion, yes, and is “completely dominated and in fact saturated with its Guillermo-ness,” as I said last September. But “the best of the best”?

The Shape of Water delivers no real-life echoes or resonances that I detected, no reflections of any aspects of day-to-day living that I’ve ever tasted or encountered, no definings of the state of life or culture in 21st Century America.

It’s a well-produced, tender-hearted thing, but none of the frowning baddies guess that Sally Hawkins and Octavia Spencer probably had something to do with the creature’s disappearance? And a wooden bathroom door mounted on a plain hinge keeps hundreds of gallons of water from leaking through?

And what about subjecting audiences to Michael Shannon‘s “Richard Strickland”, one of the most toxic and tiresome one-note villains in motion picture history, along with Nick Searcy‘s “General Frank Hoyt”, who runs a close second? I saw Shape for a second time about a month ago, and Shannon was driving me crazy.

As I said last September, I agree 100% that Shape is definitely Guillermo’s best film since Pan’s Labyrinth — one of his smaller-scale creations that aims above and beyond the fanboy realm — but it’s nowhere near as good as Pan’s Labyrinth, Chronos or The Devil’s Backbone, or two others which Guillermo creatively produced but didn’t direct, The Orphanage and Mama.

If you ask me Guillermo has adhered too strictly to a black-and-white moral scheme here. I for one am always looking to find a couple of minor smudges or failings in a good character, and a sympathetic or slightly redeeming quality or two in a villain, but this kind of complexity is not in the Shape of Water cards.

A friend: “To me, the whole (preposterous) (unconvincing) story winds up being a kind of metaphor for everything that’s wrong with him as a filmmaker. He’s an artist in love with…creatures. Monsters. Effects. Things. Technology. Okay, I get it — there’s a place for that. I love creatures too. But I love it when they’re great creatures. I grew up with The Creature From the Black Lagoon (who was just trying to creep you out, but was still a more poignant character than this one). But how can we get caught up in a beauty-and-the-beast love story when the beast looks like the Creature From the Wal-Mart Lagoon, and he doesn’t have, you know, a personality?” 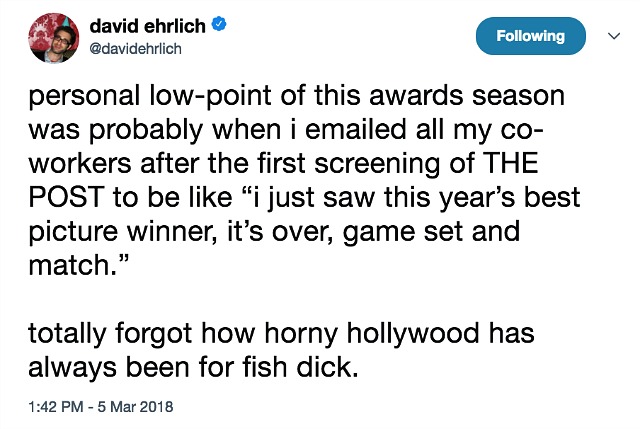 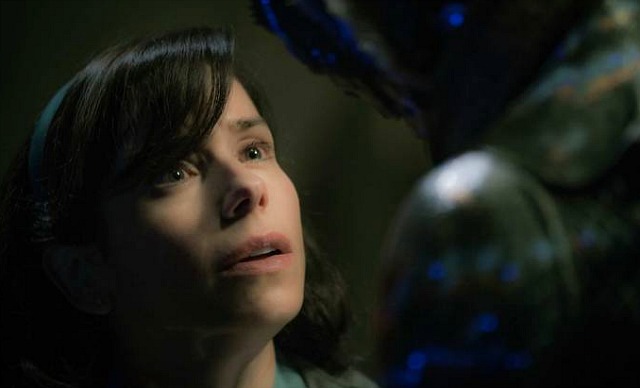 March 5, 2018by Jeffrey Wells97 Comments
« Previous post
Speaking Of Oscars
Next post »
A Remake That Only Elitists Will Want To See?