A Remake That Only Elitists Will Want To See?

Variety reported two months ago that Guillermo del Toro and Sunset Gun‘s Kim Morgan are co-writing a remake of Nightmare Alley, a 1947 film noir that even its biggest fans (and they are relatively few in number) would describe as decidedly bizarre if not grotesque.

The handsomely produced 20th Century Fox film starred Tyrone Power as a sociopathic carnival barker who rises and falls in sordid, appalling fashion, and ends up returning to the carnival realm as a geek who bites the heads off chickens.

Stuart Gordon‘s Trailers From Hell assessment sums it up nicely, and I’m all for films that cater to people with perverse tastes in downswirl melodrama. But the original Edmund Goulding-directed film died at the box-office for a reason.

If Guillermo and Kim’s script closely adheres to the 71-year-old Jules Furthman screenplay or to William Lindsay Gresham‘s 1946 novel (which arose from conversations Gresham had “with a former carnival worker while they were both serving as volunteers with the Loyalist forces in the Spanish Civil War”**), look out. At best this will be a film festival darling (Telluride’s Tom Luddy will wet himself) and not much else. 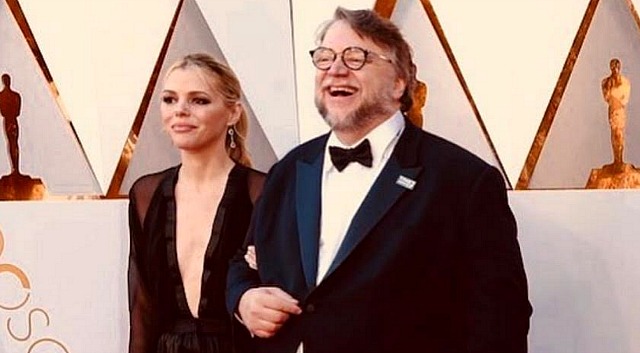 I understand that Guillermo and Kim are adding a supernatural creature (what else?) to the carnival milieu, but there are so many other great black-and-white noirs that could be re-made or re-imagined. Why remake a film that is almost certain to be rejected by Joe and Jane Popcorn?

Last October Guillermo told Variety he’ll be taking a sabbatical for a year as a director. (“I was going to do Fantastic Voyage, but after The Shape of Water I need to take pause.”) So there’s time to rethink and regroup. Forget Nightmare Alley and remake This Gun For Hire instead. Except have the traitors be monsters hidden inside human bodies a la The Hidden.

In fact, remake The Hidden! It was released 31 years ago, and only New Line sentimentalists and Bluray aficionados have even heard of it. Now that would make money!

** There’s your Guillermo connection — GDT has a thing about setting his films in Spain during that country’s civil war — the conflict between Republican troops under Generalissimo Franco and the Loyalists provided the backdrop to Pan’s Labyrinth and The Devil’s Backbone, respectively set in 1944 and 1939. I’m guessing that Nightmare Alley, if it gets made, will be set in Spain in the mid ’30s.