This was snapped in Brooklyn (I think) a couple of days ago, or whenever the most recent snowfall began. It ranks in my mind as one of the coolest inclement-weather snaps I’ve seen in a long time, largely because it’s almost entirely monochrome except for (a) the glowing stoplight, (b) the brake light on the truck, (c) the half-obscure STOP sign, and (d) the faintly fleshy color of the legs of the dude with the umbrella. I’ve seen young guys in shorts during Sundance blizzards, and, as I’ve said before, this is strictly a 21st Century Millennial phenomenon. No other generation in the history of civilization has distinguished itself by wearing shorts in this kind of weather. 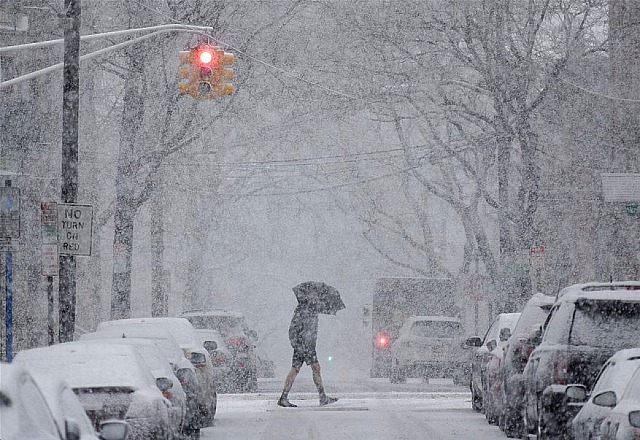 In a 2.28.10 riff called “Last Day at Sundance,” the following caption was used for a shot of a Sundance volunteer wearing shorts: “Serious cold and heavy snow outside, and this Sundance volunteer — a young Australian guy — was wearing shorts and sneakers. I half-admire the absurdity of dressing like this; I also felt a brief urge to grab this guy and smack him around.”