Wes Anderson‘s Isle of Dogs opens on Thursday night. Several critics reviewed it yesterday (95% Rotten Tomatoes rating, 83% Metacritic), but I haven’t been invited to a single screening. Today I asked to be afforded that privilege. “Hi, guys…sorry to bother you, heh-heh, but any chance I could, you know, attend a last-minute screening of a film by a major-league guy whose stylistic signature is known worldwide, and whom I’ve personally known for close to a quarter-century?”

Wes and I have had a couple of spats, but not for several years. He’s always been polite and responsive whenever I’ve reached out. He’s never not wanted me to see Isle of Dogs, or at least he didn’t indicate this today. I don’t think this is on him. Okay, I’m not a great lover of animation, but I was cool with and fully respectful of old-fashioned stop-motion and the way this technique was used for Fantastic Mr. Fox so what’s the big issue? What critic goes invite-less if he’s been mixed or mildly negative about a couple of films by a certain director in the past? 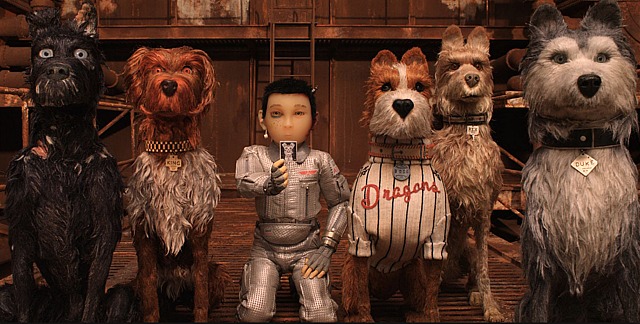 I’ve known Wes for nearly 25 years. I wrote the first L.A. Times “Calendar” profile piece about Wes and Owen Wilson; it was published on 11.7.93. For over two decades I’ve been a respectful admirer (okay, with reservations) of his films. That respect has been reciprocated for many years. I attended Fox Searchlight’s Fantastic Mr. Fox junket in England in 2010, and their Grand Budapest Hotel junket in Berlin in ’14.

True, I’ve been nursing ambivalent reactions to Andersonville — i.e., that carefully tended, super-exacting realm of his — since The Royal Tenenbaums, which popped at the N.Y. Film Festival 16 and 1/2 years ago. On one hand I love (as always) the Anderson stamp…that feeling of dry but immaculate control of each and every element. And of wry humor. And of atmosphere and attitude. Andersonville is a place as distinct and precisely ordered and unto itself as Tati-land or Kubricktown or Capraburgh. And on the other hand I’ve sometimes felt frustrated by it.

Over the last 22 years my only serious Anderson loves have been Bottle Rocket, Rushmore and The Grand Budapest Hotel. The rest I’ve been mixed-positive or mixed on. But at least there were those three, and tomorrow’s another day.

For over a decade the general gripe (i.e., hardly mine alone) has been that Anderson has allowed his films to be consumed by a deadpan mannerist attitude along with a certain style-and-design mania. 11 years ago Esquire‘s David Walters wrote that Anderson’s signature style had devolved into schtick, a realm of “world-weary fellows who hurl non sequiturs and charm with endearing peccadilloes and aberrant behavior.” Or, as the Trailer From Hell guy says, a haven for “emotionally stunted guys suffering from vague bouts of ennui.”

Wes’s films will always be all of a piece, each one cleanly and tidily and fastidiously written with that singular sense of dry, understated, cosmopolitan pocket-drop humor, or rather humor that isn’t really “humor” because it’s about an ensemble of vaguely depressive glumheads who are anything but “funny” and yet are amusing in a heh-heh, LQTM, chuckle-about-it-later-as-you’re-sitting-on-the subway-in-the-wee-hours type of way.