A trailer for Tony Zierra‘s Filmworker, a brilliant doc about the life and times of Leon Vitali, has finally surfaced. It’s been kicking around in my head for a full year, this film, and now the crescendo. Easily the juiciest and dishiest capturing of Stanley Kubrick‘s backstage life and career ever assembled. It’s about Vitali’s life, of course, but by way of Kubrick’s. (Or is it the other way around?) 21 or 22 years of deep focus, late hours, nose to the grindstone, passion, obsession, total commitment and almost no days off, ever.

Vitali began working for The Great Stanley K. in various capacities a year before The Shining began shooting, and then stayed with him to the end (i.e., 3.7.99). Researcher, gopher, go-between, driver, casting assistant, print cataloguer and (after Kubrick’s death) restoration consultant. The film is a completely satisfying record and assessment of that servitude, that era, that history, that ongoing task. And that Vitali voice! A bassy creation made resonant by decades of cigarette-smoking, and really something to sink into.

Posted on 1.19.18: “In the ambitious but mediocre Blindspotting, the sympathetic, Oakland-residing Colin (Daveed Diggs) is trying to stay out of trouble over the final three days of his parole status. Unfortunately, his longtime best friend is a violent, hair-trigger, gun-wielding asshole named Miles (Rafael Casal) so right away you’re wondering “is Colin as stupid as he seems, or is he just temporarily stupid?”

I love Sarah Huckabee Sanders‘ pronunciation of Iran, which in cultivated circles sounds like “Ihrahn.” At 1:42, Sanders pronounces it “Eye-rayuhnn.” She also pronounces France as “Frayunce” (33-second mark). She probably pronounces Paris like a friend from Connecticut does — “Pairiss.” A deft sidestepper and frequent liar, Sanders is only 35 years old. If there is a hell, Sanders will definitely be taking the down elevator when her time comes.

Tim Bergling (a.k.a. Aviici or “Aveechee”), the Swedish D.J. and electronic dance music producer whose worldwide fame completely eluded my attention, was found dead today in Muscat, the capital of Oman. He was 28 years old, or the age of my younger son Dylan. He apparently drank himself to death. The Sun‘s Jacob Dirnhuber reports that Aviici “stopped touring and live performances in 2017 after being diagnosed with pancreatitis from excessive drinking. He was forced to have an emergency appendectomy and have his gallbladder removed.”

If only we could get rid of people who walk heavy…boom! boom! boom! The kind of slam-heel walking that can make an older home vibrate and shudder. People who pound their heels like a weapon. My younger sister used to walk like this. When she used the stairway in our pre-war home you could hear those jackhammer heels ramming and thumping and giving pause to the main beams.

If you’re an elegant person (and by that I mean someone who also takes relatively short showers) you’ll walk around like you’re wearing hush-puppies. Like Swing Time Fred Astaire or Cary Grant over the Cannes rooftops in To Catch A Thief, or Marlon Brando shuffling across a sound stage in Guys and Dolls.

Remember Paul Newman describing Jackie Gleason as he was “shooting the eyes right off them balls” in The Hustler? “Look how he moves, he’s like a dancer!” It doesn’t matter if you’re big-boned or a Jabba; if you know how to walk you’ll always step softly.

5 Comments
There She Goes Again

The one-two punch of National Geographic‘s “Genius” series (Albert Einstein, Pablo Picasso, Mary Shelley) and Gabe Polsky‘s In Search of Greatness doc has made me irritable. Because I can’t stand that awful word, even though I use it from time to time. And not just the word but people who seem to say it a lot, or more frequently than once in a blue moon.

The first time I recoiled at the word “genius” was when a New York girlfriend was explaining that she was dropping me for a guy who had his own advertising agency, Geoffrey something-or-other, and that he was a “real genius.” Fuck that guy and fuck anyone who calls anyone else the g-word, I decided then and there.

Decades have passed but I’ve noticed time and again that people who say “genius” the most — sycophants, ass-kissers, headline writers, wives and girlfriends, employees, speechwriters, radio-talk-show hosts — have the same kind of obsequious attitude about X-factor people. That’s my preferred term, by the way. No allusions to any sort of God-given brilliance or incandescence, but definitely off in some other realm.

I first heard the term when I was six or seven, when my mother was telling me who Albert Einstein was, and that was long before he changed his name to Albert Brooks. All I know is that I decided a long time ago to throw a little stink-eye at anyone who says “genius” in conversation. It’s one thing to type it and be done with it, but saying it out loud is like chalk on a blackboard.

A semi-historic, invitation-only screening of Black Panther occured in Riyadh the night before last (i.e., Wednesday, 4.18). The premiere happened at a new AMC plex in the King Abdullah financial district, the first in the country since a 35-year-old ban on cinemas was lifted last December.

Video messages from various film industry bigwigs (Tom Rothman, Jeff Shell, Jim Gianopulos, Alan Bergman, Kevin Tsujihara) were screened before the feature. A message from producer and former AMPAS president Hawk Koch: “I’m sure that Saudi Arabian filmmakers are now going to start making the kinds of films that will gain recognition all over the world. And I bet very soon, a film from Saudi Arabia will get nominated for an Oscar!”

HE reaction: In my estimation, Koch’s encouraging vision is unlikely if not illusory. There’s a current p.r. effort underway to sell Saudi Arabia as a more liberal nation (i.e., a Saudi Arabian pavilion will appear at next month’s Cannes Film Festival), but it’s still a medieval-minded autocracy, and governed by a very hardline approach to Sharia Law. A harshly punitive government mentality has never been conducive to creative ferment, at least not in my experience.

The only thing Saudi Arabia is really liberal about, it seems, is beheading people, and they still occasionally stone people to death. A Wiki page says you can lose your head in Saudi Arabia for murder, treason, rape, blasphemy, adultery, sexual misconduct (anything non-hetero), sorcery or waging war on God.

Guillermo del Toro on the sweet smell of success: “You have to remain a scrapper, [and] success palliates that spirit. Success tells you ‘you’re a good boy.’ If you give into that impulse you get disoriented because you get patted on the back. The artist has a certain degree of rage against the people [who] are inside the candlelight banquet…success tells you, ‘come on in, have a piece of chicken, have a glass of wine,’ and you shouldn’t. If you go into that banquet you lose some of that scrapper spirit.”

HE response: There’s nothing wrong with a friendly candlelit banquet if you don’t drink, and if you go easy on the chicken. Everyone needs to come in from the cold from time to time. Also: Every artist suffers the same anxiety attack every morning, and the name of that attack is “Have I peaked? Am I more or less done? Am I dead but don’t it?” The natural knee-jerk response is “Hell, no!…I’m just beginning, more mountains to climb,” etc. But there’s another voice from deep inside that says “you think?” 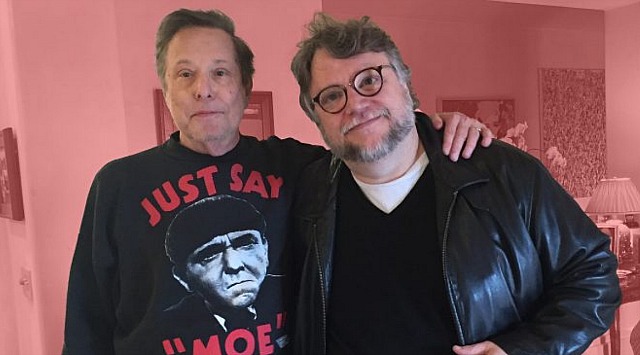 William Friedkin on his French Connection Oscar glory: “I feel like I kind of lost myself. Absolutely.”

HE response: The thing about success and power is that they goad people into revealing their dark sides. If a person has snarly tendencies embedded in his/her personality, success makes them rise to the surface. Also: For the 109th time, the Billy train hit a wall when Sorcerer flopped, but — BUT! — it’s a brilliant film. The mistake was having the mob assassins come for Roy Scheider at the very end. The poor guy had just made it through a terrible ordeal through sheer moxie and determination. He deserved a measure of peace, and perhaps even a ticket out of that South American hellhole. But Friedkin had him killed. When that happened, the audience went “fuck this movie.”

Friedkin and Del Toro got together under the banner of a Talk House podcast, posted by The Playlist‘s Rodrigo Perez.