Support on Patreon Follow @wellshwood
56 Comments
See How Pratt Is Tipping Into Fat?

HE approves of any and all musical tributes to classic American TV culture. Remember the sing-along bus-ride sequence in Planes, Trains and Automobiles? That aside, the first thing that pops is that “Peter Quill” looks like Alex Karras (i.e., “Mongo”) in Blazing Saddles, Aldo Ray‘s “Sgt. Muldoon” in The Green Berets or post-2012 Gerard Butler. And what’s the reaction to Chris Evans‘ late ’70s/early ’80s gay-clone look (flattop, moustache)?

The jury on the second Bill Cosby-Andrea Costand trial (i.e., three charges of aggravated indecent assault) deliberated all day today without result. The trial happened in the Montgomery County Courthouse in Norristown, Pennsylvania, a suburb of Philadelphia.

Same racial composition as the jury for the first trial, which ended on 6.17.17 as a mistrial — all white except for one black man and one black woman. I’ve assumed from the get-go that an O.J. factor resulted in a reluctance to convict Dr. Cliff Huxtable. “This is the jury system, the social values of this country, the way people tend to see things,” I wrote when the mistrial was announced. “You’re rich and famous and played a nice guy on TV? A juror or two will find a way not to convict.”

I have an interest in this case because a friend, Joan Tarshis, told me several years ago that she became one of Cosby’s victims in 1969. Twice. I posted her account of the Cosby violations on 11.16.14. There are reportedly 45 women who have accused Cosby of mickey-finn rape. There are probably still more who haven’t yet spilled the beans.

I’m fairly certain I’ll never forget this video for the rest of my life. Posted nearly 17 months ago, 56,345,332 viewers so far. I’ll bet that’s a lot more than the total number of people who’ve seen or even heard of Joseph H. Lewis‘s Gun Crazy. A new Bluray of this 1950 classic pops on 5.8.18. This is the kind of subliterate world we live in.

It’s odd when you suddenly tune into an actor who’s been working all along but hasn’t been “in the conversation” for decades, but who was definitely happening when young. And you say to yourself, “Okay, he looks good and appears to have been taken care of himself, but what’s he been doing for the last 40 or 45 years?”

This happened a couple of hours ago when I watched a trailer for an apparently flawed film called Welcome To The Men’s Group (5.18), and I noticed that the lead, at least according to the publicity notes, is Timothy Bottoms. It’s always pleasing to notice that an older guy has come through rough times with his health and a sense of humor and a semblance of solvency, but I was taken back.

Now 66, married and living in Santa Barbara, Bottoms was really hot in his early 20s. His biggest role, of course, was Sonny Crawford in Peter Bogdanovich‘s The Last Picture Show (’71); he also starred that year in Johnny Got His Gun, in James Bridges‘ The Paper Chase (’73) and Phillip Kaufman‘s The White Dawn (’74).

And then he seemed to succumb to that early ’70s mindset and begin to behave in a kind of mystical, druggy, hippie-dippy way, and after a while became the guy who kind of flaked out and followed the path of Dennis Hopper and George Lazenby and other ’60s actors who said “whatever, man” to the idea of careerism and acting being about hard work, hunger, devotion and discipline.

There was a moment on a Merv Griffin Show appearance when Bottoms, wearing a kind of Indian sarong, led the audience in a sing-along of “Row, Row, Row Your Boat, Gently Down The Stream,” etc. It was the kind of thing that people did back then. People who had left the planet, I mean.

Here are excerpts from a 5.28.01 People profile called “Bottoms Up,” written by Tom Gliatto:

“In the late ’70s, Bottoms’s career came apart. By then, increasingly reclusive on a 340-acre Big Sur ranch he bought in 1974, he was hooked on a variety of drugs — ‘whatever anybody else was doing,’ he says.

“In 1979 a Jesuit friend took Bottoms under his wing and steered him away from the drugs. But his attempted 1981 comeback in Broadway’s The Fifth of July was disastrous. In the midst of a custody fight with Cory, ‘mentally I just wasn’t able to handle it,’ he says. Quitting the show in rehearsal, ‘I took a train home and called Marcia.’

Between today’s First Man, Boy Erased and BlackkKlansman previews, yesterday’s A Star Is Born first-anywhere trailer and Monday’s Quentin-and-Leo appearance to promote Once Upon A Time in Hollywood, it seems as if I picked the wrong Cinemacon to not attend. Over the last couple of years I’ve been dismayed by the big-studio tendency to only promote lowest-common-denominator, jizz-whizz, bass-thump, animal-level crap. Now, out of the blue, three adult-level, beyond-the-cheap-seats films are suddenly the big Cinemacon topics of discussion. Go figure. HE to Mitch Neuhauser: Is it okay if I attend next year? 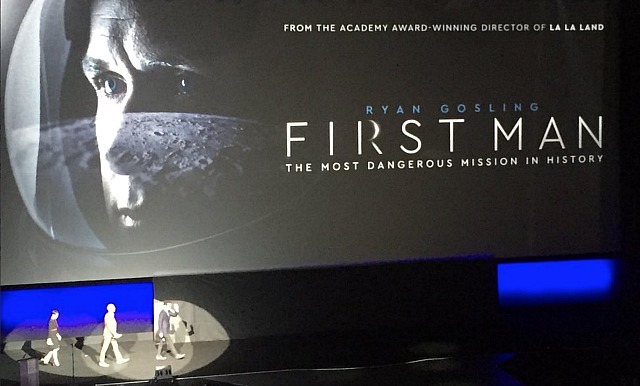 You know you’ve sunk to the bottom of the celebrity-endorsement barrel when you’re starring in a La-La Land-ish musical pitch for the lowest, most socially deplorable level of comfort shoe ever invented — Crocs. Poor Drew Barrymore….first her low-rent Santa Clarita Diet Netflix series, and now this.

The key lyric is “and you don’t care what people think.” Because we know what people think. Have you ever seen a person wearing Crocs who didn’t make you go “eewww” if not avert your eyes? Wearing Crocs is like draping a flashing electric sign around your heck that says “I am sartorially clueless…I have no shame, no taste…I may own a Bel-Air mansion, but my Crocs suggest that I’m a low-class donkey who eats onion rings for dinner and lives in a trailer park.”