The best thing about Bill Norton‘s Cisco Pike (’72) is the copy line on the poster — “Cisco Pike is a man of the west — West L.A.!” I worship the fact that (a) the line means absolutely nothing, and that (b) it’s so Los Angeles-centric that it couldn’t have possibly have resonated with moviegoers in Cincinatti, Atlanta, Waco, Honolulu or Perth Amboy. Really a hilarious copy line, especially if you say it over and over.

Is Cisco Pike any good? I have only the vaguest of recollections, but the trailer alone strong suggests it has almost no propulsive narrative energy. It does, however, offer a fascinating look at the ultra-polluted Los Angeles (particularly Venice) during the old druggy days.

Inherent Vice sought to recreate this pot-haze atmosphere or more precisely a Manhattan and Venice Beach milieu of ’69; Cisco Pike (released in January ’72, shot in the spring and summer of ’71) delivers it first-hand. You can’t stream it — it’s only viewable on a decade-old DVD.

I may be the only film critic who half-liked Norton’s More American Graffiti. 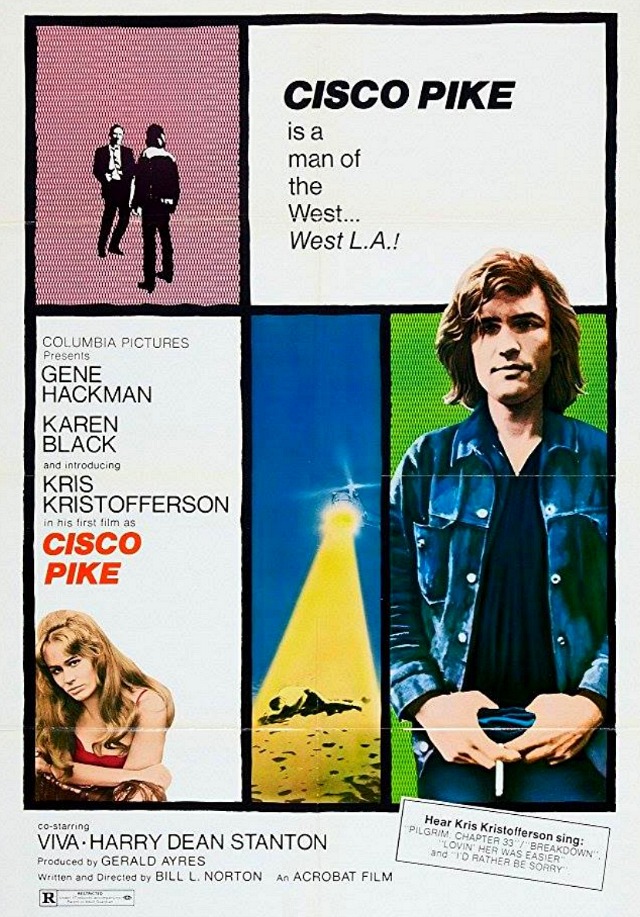 Facebook posting by Nick “Action Man” Clement: This flick is always worth a revisit every couple of years. I love that this was directed by Bill L. Norton — he also helmed Baby: Secret of the Lost Legend, which was the first theatrical experience I had at the age of four and a half.

“In Cisco Pike, which was released in 1972, Norton worked with a helluva cast in his theatrical debut — Kris Kristofferson, Karen Black, Gene Hackman, Harry Dean Stanton, Viva and Antonio Fargas. I’ve long loved marijuana-centric narratives, and this groovy movie has a “fuck the man vibe” to match its loopy and freewheeling shooting style. Apparently, legendary scenarist Robert Towne contributed in an uncredited capacity to Norton’s original screenplay. Cisco Pike is available on DVD (thought it’s quite expensive), and is way overdue for the Blu-ray treatment from an outfit like Kino or Twilight Time.”

April 6, 2018by Jeffrey Wells14 Comments
« Previous post
“The Battle of Britain” w/ Kenneth More
Next post »
Orson Welles Has a Date in Cannes