For those who don’t read HE comment threads, some interesting riffs came out of yesterday’s discussion about the hypothetical Best Picture prospects for John Krasinski‘s A Quiet Place (i.e., “And The Oscar Goes To…”). It was triggered by a 4.8 “In Contention” article by Variety‘s Kris Tapley that basically said that the New Academy Kidz (i.e., the younger, more diverse members invited to join in 2015 and ’16 by former Academy president Cheryl Boone Isaacs) might decide to nominate Krasinski’s film, given their apparent view that horror-genre films can and should be regarded as Oscar bait.

This led to HE commenter “Barney Dunn” observing that “the Best Picture slate for 2019 now includes Black Panther and A Quiet Place. On top of which Hereditary was called an early Oscar contender coming out of Sundance. Maybe Ant Man and the Wasp and Incredibles 2 will generate some awards talk. This is where Oscar is now.”

Which prompted my reply: “Exactiy. In part because trade guys like Tapley are helping to fan these notions and nudge them along. I’m trading on this current, obviously, but I’m also saying ‘actually, I disagree‘ with a little sarcasm to boot and, you know, using terms like ‘New Academy Kidz.'” 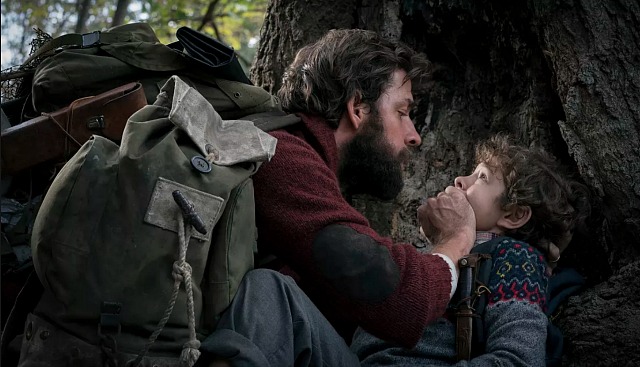 A few hours later “Mark VH” wrote, “Are we seriously going to do this every time a half-decent genre movie comes out? Why does everything have to win Oscars? Why can’t we just enjoy movies on their own terms without throwing them into competition with each other? We’re a month removed from this year’s Oscars, and does ANYBODY seriously still care who won, who was nominated, etc.? Literally nobody gives a shit.”

My reply: “I care, I’ve taken note, and I’ll never forget. Because the New Academy Kidz have changed the game, revamped the landscape and DEFINITELY lowered the property values. That’s fairly seismic, when you think about it.

“On one hand, if the NAK had been influencing things to this degree back in the mid ‘50s Don Siegel’s Invasion of the Body Snatchers might have been Best Picture-nominated, and that’s obviously indicative of a more intelligent and perceptive Academy mentality than nominating, say, Around The World in 80 Days.

“On the other hand another smart, grade-A monster genre flick that is basically a tactical, situational thriller and which doesn’t, by any stretch or scheme, even attempt to deliver an affecting or metaphorically penetrating impression of the human condition except to say “life is scary because there are predators out there” (not to mention Krasinski’s decision to use the exact same deep-register monster gurgles that were heard in Cowboys and Aliens)…a film of this calibre (i.e., worthy but calm down) has just been thrown into the Best Picture hopper.”

Afterthought: Serious, classy, high-style horror is its own bird. Especially in the case of smarthouse horror like Robert Eggers‘ The Witch and Jennifer Kent‘s The Babadook. Being a diehard Luca Guadagnino fan, I’m naturally looking forward to Suspiria, perhaps at the Cannes Film Festival.