Two weeks hence Tony Zierra‘s Filmworker, a brilliant tale of the life and times of Leon Vitali, will open at Manhattan’s Metrograph, and then a week later at West L.A.’s Nuart. I’ve been insisting for months that this is an absolutely world-class doc, not to mention the best inside-the-beltway, what-it-was-really-like Stanley Kubrick doc ever made.

Yesterday I sat down with Vitali at a Starbucks in Culver City. We shot the shit for 40 minutes or so, the only problem being that we sat outside on a patio, and that meant contending with the rumble of L.A. traffic — cars, trucks, ambulances, fire engines — not to mention a Starbucks cleaning person who kept generating that awful “aaahhhggg!” sound when you drag metal tables and chairs across concrete. So it might be a bit of a struggle to listen to our chat, but by all means have a go. 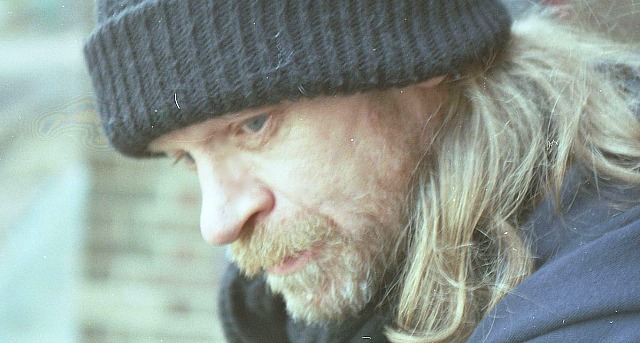 Given the traffic noise and the difficulty in hearing each and every syllable, I asked Leon whatever came into my head, chatting more than interviewing really.

Vitali: “I did the color timing on the 2001: A Space Odyssey 4K Bluray, and 4K is so beautiful…the details, the shadows…looking at it on these very high resolution monitors. It looks great, everybody loves it, and I’m not blowing my own trumpet. HE: “What would you say is the difference between the forthcoming unrestored Chris Nolan version and the spiffed-up 4K Bluray?” Vitali: “The difference is that the 4K has more clarity and sharpness and detail.” HE: “So people seeing the Nolan version in Cannes will say, ‘This is wonderful…not as sharp or as clear as the 4K but it looks very good.'”

Sidenote: For some reason I developed an idea years ago, perhaps after speaking with Dan Richter, the guy who played the bone-tossing “Moonwtacher” in 2001, that the “Dawn of Man” sequence was shot early in the schedule. Vitali told me yesterday that it was actually the last thing to be shot.

HE: “Your voice has a softer quality right now, but there are passages in Filmworker in which it has that deep, resonant, gravelly sound…the kind of great-sounding voice that can only result from years and years of cigarette smoking. Are you smoking now?” Vitali: “Not as much. I’ve cut down. At my height with Stanley I was smoking three packs a day. Stanley [himself] would have one every now and then.”

HE: “I always loved the sound of Stanley’s voice. The timbre and the accent. The voice of a cultured, well-educated New York cab driver. A guy who grew up in the Bronx and knew all the angles.” Vitali: “He never lost that.”

HE: “The special groove of Filmworker for me, is that when you’ve found something that really matters to you…that for all practical and aesthetic purposes has become a source of profound satisfaction, as your work with Stanley became…for me it makes Filmworker such a sublime film, because it understands and conveys that special devotion.” Vitali: “I went to drama school [when young] and I met this guy who taught me how to harness a certain inner energy…it made me realize, once you really get into something, something that really seeps in and opens you up…you’re in there and it’s no contest…you know?”

For the sixth or seventh time:

“Filmworker is easily the juiciest and dishiest capturing of Stanley Kubrick‘s backstage life and career ever assembled. It’s about Vitali’s life, of course, but by way of Kubrick’s. (Or is it the other way around?) 21 or 22 years of deep focus, late hours, nose to the grindstone, passion, obsession, total commitment and almost no days off, ever.

“Vitali began working for The Great Stanley K. in various capacities a year before The Shining began shooting, and then stayed with him to the end (i.e., 3.7.99). Researcher, gopher, go-between, driver, casting assistant, print cataloguer and (after Kubrick’s death) restoration consultant. The film is a completely satisfying record and assessment of that servitude, that era, that history, that ongoing task. And that Vitali voice! A bassy creation made resonant by decades of cigarette-smoking, and really something to sink into.

“The photos and behind-the-scenes film clips alone are worth the price, I can tell you. Great stuff. On top of which I was reminded that Vitali played not one but two roles in Kubrick films — Lord Bullington in Barry Lyndon (’75) and ‘Red Cloak’ in Eyes Wide Shut (’99).

“Vitali said to himself early on that he’d like to work for Kubrick. What he didn’t expect was that once that work began Kubrick would want Vitali at all hours, all the time…focus and submission without end. If the early sentiment was “I’d give my right arm to work for Stanley Kubrick.” Kubrick’s reply would be “why are you lowballing me? I want both arms, both legs, your trunk, your lungs, your spleen, your ass and of course your head, which includes your brain.”

“Yes, Virginia — Stanley Kubrick was no day at the beach. Then again what highly driven, genius-level artist is?

“But he was also a sweetheart at times, to hear it from Leon. It was just that Kubrick believed in trust and had no time for flakes, fractions or half-measures of any kind. His motto was that if you’re ‘in’, you should be in all the way. And Vitali was, obviously, and yet during those 21 years he worked on only three Kubrick films — The Shining, Full Metal Jacket and Eyes Wide Shut. But that was Kubrick, a brilliant control freak who wound up eating himself in a certain sense.”