That’s it — Amy Schumer‘s I Feel Pretty (STX, 4.20) has gotten pasted on Rotten Tomatoes (30%) and Metacritic (44%), and that’s probably all she wrote. Comedy-wise this is Schumer’s second dud since 2015’s Trainwreck. Her last effort was Snatched with Goldie Hawn. Making a good, character-rich comedy is really hard. Hell, making a good movie period. Judd Apatow obviously did pretty well with Trainwreck, but I Feel Pretty‘s co-directors, Abby Kohn and Marc Silverstein…who knows what went wrong? Sorry.

A 4.18 review by The Stranger‘s Elinor Jones is kinda hilarious:

“I Feel Pretty is about a woman who suffers from a lack of confidence due to, you know, existing. After hitting her head in a spin class, she starts to believe she’s beautiful, which leads first to a positive attitude and then to successes in love and her career in selling makeup. (UGH.) It’s supposed to be funny, because everyone can plainly see that Schumer is disgustingly average! LOL, right?! A silly lady over 30 who weighs more than 120 pounds thinks she’s pretty! HA HA HA! HA HA HA HA HA HA HAAAAAAA! I laughed until I cried, because I am also over 30 and weigh more than 120 pounds, and my body could serve as a punch line too.” 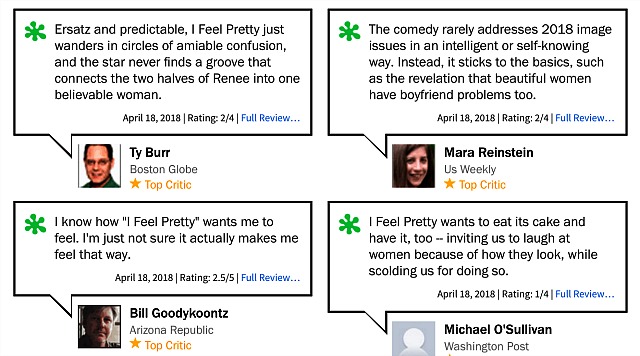 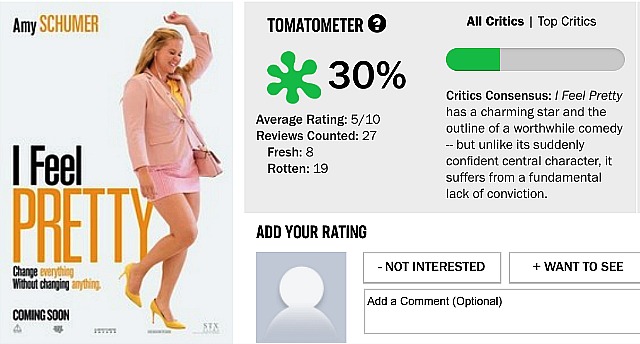