Seriously — This Is The Cannes ’18 Lineup

Is this the weakest Cannes lineup anyone can remember? Kinda feels that way. Telluride’s Tom Luddy and Julie Huntsinger are having champagne for breakfast. I know titles will be added, of course, but right now, what a letdown. Lame. Weak tea. The Netflix withdrawal was devastating, decimating. If the festival could have at least shown Roma, Norway and The Other Side of the Wind, things would be looking somewhat better this morning.

I’m leaving home for three weeks, travelling thousands of miles and laying out roughly $4K to see these five significant films plus whatever the noteworthy surprises may be.

No Luca Guadagnino (Suspiria will play Venice/Toronto), no Laszlo Nemes (Sunset), no Nuri Bilge Ceylan (The Wild Pear Tree), no Brian De Palma (Domino), no Mike Leigh (Peterloo), no Paolo Sorrentino (Loro), no Jennifer Kent (The Nightingale), no Claire Denis (High Life), no Alfonso Cuaron (Roma), no Olivier Assayas (E-Book), no Carlos Reygadas (Where Life is Born), no Paul Greengrass (Norway), no Terrence Malick (Radegund), no Woody Allen (averse to showing A Rainy Day in New York as this would involve press badgering) and no Orson Welles (The Other Side of the Wind). 15 might-have-beens!

What’s the point of re-mentioning the out-of-competition screening of Solo: A Star Wars Story?

No Lars Von Trier for now, but The House That Jack Built, an envelope-pushing serial-killer drama with Matt Dillon and Uma Thurman, may be announced as an add-on.

Obstinate French exhibitors and that prehistoric French law insisting upon a three-year window between theatrical and streaming are the villains this morning.

From Variety: “The competition program includes just three female filmmakers, prompting Frémaux to reiterate his position that ‘the films that were selected were chosen for their own intrinsic qualities,” not the gender of their directors. Acknowledging the importance of the #MeToo and #TimesUp movements, (i.e., “The world will never be the same again, and we will question our own practices about the gender parity” in salaries and jury representation), Fremaux stressed that “there will never be a selection with a positive discrimination for women” — i.e., a quota system.

Also from Variety: “[Thierry] Fremaux countered criticisms that the festival may be losing its power to attract high-profile films, unconvincingly suggesting that prize-winning directors Xavier Dolan and Jacques Audiard had not turned down a formal invitation to screen in Cannes, but rather, were still editing their respective films, “The Death and Life of John F. Donovan” and “The Sisters Brothers.”

“And yet, he admitted that American companies in particular can get nervous about how a film’s reception in Cannes can impact its awards and box office chances, admitting, ‘When you are on a strategy of a late [fall] release, Cannes might not be the ideal place to show a film.'” 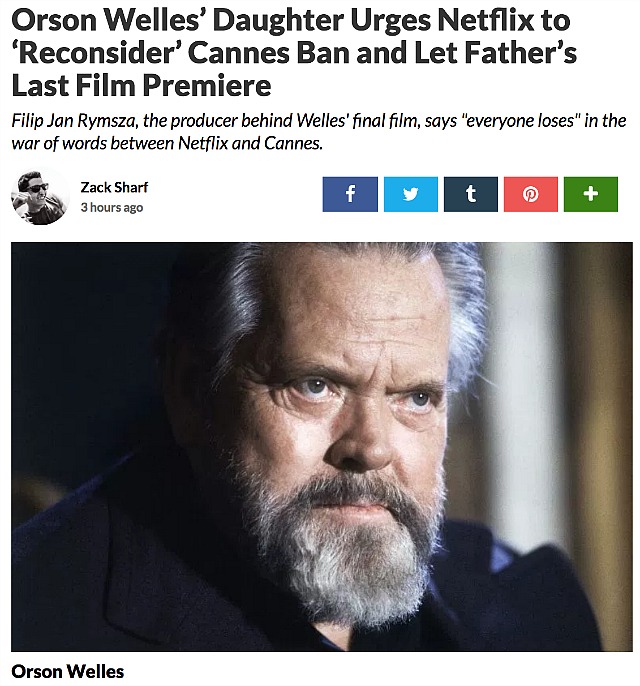