Almost exactly 38 years ago, I took cartoonist Chris Browne to an early press screening of The Shining. The old Warner screening room at 75 Rockefeller Plaza, I mean, on the eighth floor. Plush, nicely carpeted, 103 seats.

Browne has been drawing the “Hagar the Horrible” strip since ’88, and is quite the guy in cartoonist circles. But he was in a not-yet place back in ’80.

We were shown the slightly longer version that ended with Overlook manager Barry Nelson visiting Shelley Duvall in a hospital room after Jack Nicholson‘s frozen-icicle death. Like Steven Spielberg after his initial viewing, I wasn’t all that knocked out. It was only years later, having watched The Shining for the eighth or twelfth time (who remembers?), that I realized it had seeped into my system and taken hold in some curious way.

A few critics were there along with Buck Henry (glasses, tan baseball cap), Malcolm McDowell and Mary Steenburgen.

As soon as the lights came up Browne whipped out his sketch pad and, in the space of two or three minutes, drew a cartoon of Henry and his friends in their seats, their eyes wide with terror and with little piss puddles on the floor below. Browne went up to Henry in the downstairs lobby and showed him the drawing. I can recall Henry’s dryly bemused expression with absolute clarity.

Yesterday I wrote Chris on Messenger and asked if he still had that drawing. If so I asked if there was a chance he could scan it and send it my way. Or, failing that, if could he re-draw it and send it along. (As noted, the original only took him three minutes to draw it inside the screening room.) Chris graciously agreed to re-draw it but (a) without McDowell or Steenburgen, and (b) without the pee puddles. So here’s Buck again, and here’s to the lightning-fast creative derring-do of Chris Browne. 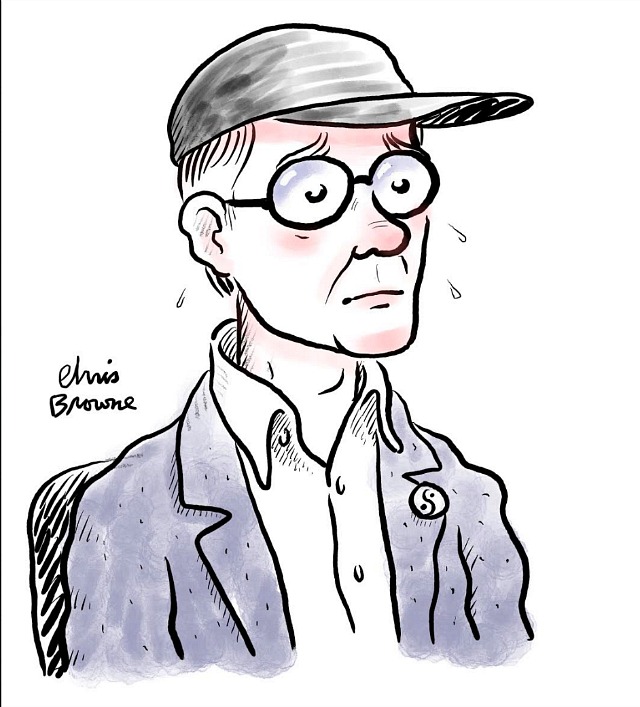 Sidenote: Once upon a time there was a Shining DVD that presented Stanley Kubrick‘s film in a 1.37:1 aspect ratio. I love the 1.37 Shining for dozens of compositional reasons, but reason #1 is the helicopter shadow during the opening credits. Here’s a taste: