Support on Patreon Follow @wellshwood
8 Comments
“…Or Give Me Meth”

I’ve known a meth-head or two in my time. Their churning brains and emotional extremes…truly one of the worst realms ever imagined or created. Run in the opposite direction. Obviously a showy role for Timothee Chalamet, but he’s such a gifted actor so it all balances out. Directed by Felix Van Groeningen, re-written by Luke Davies. Steve Carell, Amy Ryan, Maura Tierney, Timothy Hutton, Amy Forsyth, Ricky Low, Kaitlyn Dever. Produced by Brad Pitt‘s Plan B Entertainment. Amazon will release Beautiful Boy on 10.12.

A half-hour ago I slipped out of a still-running Salle Debussy screening of Nuri Bilge Ceylan‘s The Wild Pear Tree. It runs 188 minutes, and I made it to the two-hour mark. I’ve been a Ceylan fan (Climates, Three Monkeys, Once Upon a Time in Anatolia, Winter Sleep) for years, but this time he lost me. As in “forget it, life is short, this isn’t happening,” etc.

I’ll get around to seeing the final hour later this year, but I knew The Wild Pear Tree was a no-go within the first half-hour.

Set in a mid-size Turkish city (Yenice), it’s a John Osbourne-ish, angry-young-man thing about despair, bitterness, insecurity and festering resentments. The protagonist is Sinan, a would-be writer (Aydın Doğu Demirkol) with an attitude problem. Pissed at his father, dismissive of his friends and the community, a bit arrogant, undisciplined. You can sense early on that he’s his own worst enemy.

I’ve just shared the following with a journalist friend: “The main character, the unshaven and hunched-over Sinan, was just insufferable. In denial, judgmental, dismissive of community locals, a guy with an attitude, indecisive, sullen. Two hours with that guy was more than enough.

“Nothing really happened in the first two hours. No inciting incident, nothing sought or feared except a life of tedium, nothing at stake, no story tension at all, no bad decision or any decisions of any kind…it was just idling in neutral.

“When I saw the body lying near the tree, I thought ‘aah, a suicide or a murder or a death from old age….but at least it’s something!’ It turned out to be none of these.

“If Sinan had only tried to re-ignite things with the pretty ex-girlfriend (the one who bummed a cigarette and was bit him on the lip when they kissed). She was cool, different, contrarian. But of course he didn’t pursue her. Why would he? That would be too interesting.

But it still feels ironic that Clarke went to so much promotional effort over a role and a performance that is overwhelmingly flat and lacking in intrigue when she gave a much, much better performance and in support of a far richer and better-written character in Phillip Noyce‘s Above Suspicion, a brilliant drug-dealing drama that I saw and praised last summer. 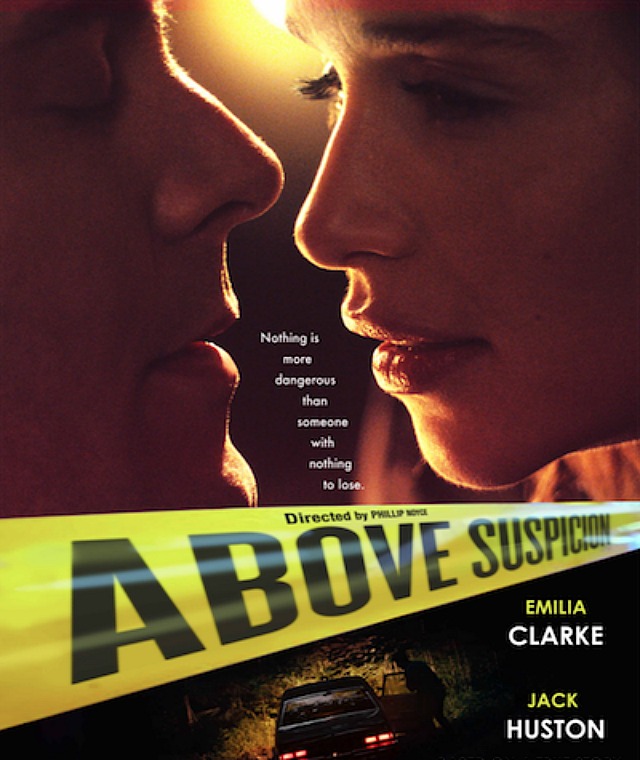 Suspicion is a fact-based, late-’80s drama about Susan Smith (Clarke), a drug-addicted Eastern Kentucky mom who lunged at an affair with a married FBI guy named Mark Putnam (Jack Huston) as a possible means of escape from her dead-end existence, but she played her hand too hard and wound up dead in the woods.

“Clarke did good,” I wrote. “Her emotionally poignant performance as Smith proves that she can operate above and beyond the realm of Tits and Dragons, and with scrappy conviction to spare. Tart, pushy, believably pugnacious.

“Clarke is English-born and raised but you’d never know it. Her Susan is the Real McCoy in a trailer-trash way, but she brings heart to the game. In other words she’s affecting, which is to say believably scared about how her life has turned out. What Clarke delivers, trust me, is a lot more than just the usual collection of redneck mannerisms.”

Earlier today I finally saw Gaspar Noe‘s Climax. It’s basically two movies, both running about 45 minutes, both scored to relentlessly pounding EDM and both about dancing bodies going to extremes — agile, mad, writhing, flailing around in dark places. And neither, I have to say, amounts to much.

The first half is “wheee!…lovin’ it!” and the second half is about “waagghhh, I’m gonna die!” But they’re both kind of shallow. Energetic, orgiastic, dullish. No dimensionality.

The first half, once it gets going after a 10- or 12-minute long video interview sequence, is far better. Climax is suddenly a wild, breathless, crazy-pump tribal dance flick — three (or four?) longish Steadicam shots of 20something dancers (Sofia Boutella is the only one I recognized), auditioning for a tour of some kind inside a modest-sized dance hall painted strawberry red (which half reminds you of the reddish gym-sized dance hall in Robert Wise‘s West Side Story), going gloriously nuts, letting loose and kicking out.

You could almost describe it as the first-act audition sequence from All That Jazz minus the grace and the dance-school training but set to EDM and with all kinds of push-push improv dancing, sweaty and hot and bursting with crazy legs and arms whirling with helicopter blades. None of it guided by a specific dance style, much less a theme or a structure of any kind, but it’s pleasing to just sink into the tribal throb and just, you know, go with it. Shallow but cool in a frenzied sort of way.

There’s no question that promotional spending and big-star appearances were sharply down during this year’s Cannes Film Festival. The U.S. film industry investment was the lowest I’ve ever observed, and I’ve been coming here for 18 years. (My first visit was in ’92.). No big press lunches, relatively few parties, a reduction in advertising and signage along the Croisette, and, as noted, relatively few big-name actors.

You could feel it everywhere. The thunder, spirit and steam behind this legendary gathering just wasn’t as strong.

The festival’s hard line in the Netflix dispute was a HUGE mistake. Fewer journalists would be decrying the end of this festival’s heft and influence if Alfonso Cuaron‘s Roma, Paul Greengrass‘s Norway and Orson Welles‘ The Other Side of the Wind had premiered here.

Face it — Cannes is essentially reverting to being a prestigious launch pad for the Best European, Middle Eastern and Asian films. With some exceptions, big-time American distributors seem to have more or less washed their hands.

From here on Cannes will be regarded more as a luxury retreat for dedicated cineastes (which is fine) and less of an essential investment for industry-driven columnists like myself. I’m not saying I’m not coming next year, but I’ll be thinking long and hard before I commit.

A rock-song bridge or “release” is when the guitarist, having absorbed the basic energy and thrust of a song, steps up and articulates the essence in some kind of heightened, contrasty way. Chorus-verse-chorus-verse-bridge-chorus-verse. The best are always short and succinct. One of the all-time shortest begins at the 45-second mark of The Who’s “The Song Is Over” and ends at the 56-second mark — 11 seconds total. One of the longest in this realm — 35 seconds — occurs in “Sympathy for the Devil,” starting at 2:53 and ending at 3:27. Two other perfect shorties — Robby Krieger‘s bridge in “You’re Lost Little Girl” (1:54 to 2:15, or roughly 21 seconds) and Eric Clapton’s in “She’s Waiting” (2:11 to 2:33, or roughly 22 seconds). Others?