On Friday morning the disgraced Harvey Weinstein smiled as he was being arrested by New York City authorities for Harvey Weinstein over sexual misconduct allegations, including rape. It was definitely a weird thing to do under the circumstances, but big-swaggering-ego guys tend to respond this way when they feel their dignity has been sullied or compromised. (Which is definitely the case here, except the compromiser is Weinstein’s own behavior.) They feel they have to project a certain no-sweat, water-off-a-duck’s-ass insouciance.

Anyway, Philadelpha-based film critic Carrie Rickey was understandably irked or disconcerted by Harvey’s signage and tweeted, “How do you describe that half-smile?” So I tweeted a response by channelling Harvey: “I can’t frown or look forlorn…I have to convey that I’m not overly ruffled by this…appearing too chastened or contrite would be humiliating…I may be a rapist, but I’m Harvey fucking Weinstein and I have my pride, or what’s left of it.”

And what happened? A few hours later the dickish Brooklyn life form known as Glenn Kenny tweeted that a new blurb from Weinstein might theoretically appear on the HE masthead: “Jeff Wells gets me.” In other words Kenny tried to turn what I wrote, which was merely an impulsive stab at character-explaining as if I had temporarily become a playwright, into a p.c. slur. The world we live in is so full of rancid bile and sickening spear-throwing and intellectual snakebite venom it’s enough to make you want to throw up on a daily basis.

On 8.21.18 Criterion will release a 4K digital restoration Bluray of Ernst Lubitsch‘s Heaven Can Wait (’43), and yet there’s a above-average-looking version on YouTube right now. [After the jump, posted on 6.24.17 by some Russian guy.] I’ve seen this once, and the Warren Beatty-Buck Henry version, which is actually a remake of 1941’s Here Comes Mr. Jordan, at least ten times. I’m sorry but the Beatty version really gets me emotionally while the well-crafted Lubitsch version is mainly deft and amusing.

The Criterion restoration was done by 20th Century Fox and the Academy Film Archive in collaboration with Martin Scorsese‘s Film Foundation. 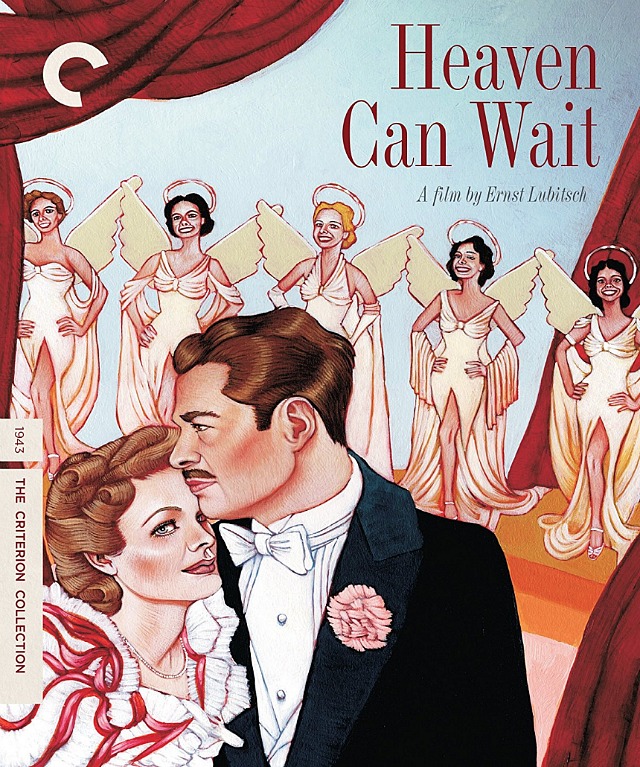 I’ve never seen Stanley Donen‘s Indiscreet. Based on Norman Krasna‘s 1953 play Kind Sir, I’ve always sensed a surface vibe — a lack of substance or intrigue. But Cary Grant‘s Scottish dancing in this scene is elevating, especially when he does the moonwalk thing at 3:05. Indiscreet opened on 6.26.58 and was shot in mid 1957, or roughly a year before Grant started on the path that would lead to his becoming Captain Trips of Beverly Hills.

Five days ago What The Flick‘s Christy Lemire, Alonso Duralde and Matt Atchity riffed about Chris Nolan‘s unrestored 2001: A Space Odyssey, and they didn’t even mention the differences in color tones between the Nolan version and Warner Home Video’s 2007 Bluray.

It would be one thing to say, “Yes, we know 2001 looks different on the Bluray but we prefer the yellowish, less sharp, teal-tinted-sky version that Nolan has given us….in the French chateau finale Dave Bowman‘s face is slightly gray and lacking in detail behind his space-helmet mask, but we prefer it that way.” But they don’t even mention the Bluray. Nor do they discuss the upcoming 4K version, which will almost certainly resemble the 2007 Bluray only better.

Lemire: “You can interpret [2001] a lot of ways!” HE: Not really. The super-aliens who sent the monolith to earth to awaken the man-apes and turn them into bone-wielding carnivores, give them intelligence and the will to gradually evolve into homo sapiens are the sires of our species — our Gods, our fathers, our evolutionary architects. They planted one of their monoliths under the surface of the moon, knowing that sooner or later humans would fly there and uncover it, which would alert them to our evolutionary progress. At the very end ancient Dave Bowman sees the monolith at the foot of his deathbed and reaches out as a dying Christian would to a crucifix or a dying alcoholic to a fifth of Jack Daniels. And then he’s reborn into a star fetus, etc.

In short, it’s about the origin and the destiny of our species. Precisely and unambiguously. John Simon nailed it early on: 2001 is a “shaggy God story.”

“It’s a sign of where America is now at as a culture that we’ve gone from Han Solo to watching an actor as frictionless and badass-free as Alden Ehrenreich pretending to be Han Solo…and finding that perfectly acceptable! Why not? We’re still at a Star Wars movie! I’ve got my 64-ounce Coke, and the dude is all right. He’ll do! That’s exactly the attitude that could plunge the Democrats into disaster when they choose their next presidential candidate. He’ll do. (Or She’ll do.)

“Where have you gone, Harrison Ford? A nation turns its lonely eyes to you.”

The preceding is the best paragraph from Owen Gleiberman‘s “It’s Official: Deadpool Is Now Cooler Than Han Solo,” posted an hour ago (5.26, 10 am Pacific) in Variety.

“It’s not every day that I feel sorry for an actor, especially one who’s lucky enough to have landed the lead role in a Star Wars film. But I honestly began to feel a little bad for Ehrenreich in Solo: A Star Wars Story. It was during the scene where, acting opposite Emilia Clarke (who looks like she could eat him alive, and would happily do so as foreplay), he attempts to signify the Awesome Casual Cockiness Of His Inner Being by slouching against a wall, hands on hips, his fingers spread out just so, in a John Wayne-meets-Clark Gable sort of swashbuckling cowboy-stud pose.

“At that moment, Ehrenreich doesn’t seem remotely like a young version of Harrison Ford’s lone-wolf space pilot; he seems like a sculpture of it. You don’t see the acting — you see the coaching. ‘Let it hang out a bit more, Alden…that’s right, spread those fingers…just keep thinking, I’m the man!’)

“I felt bad for Ehrenreich because it’s not his fault that some executive board meeting signed off on the looks-good-on-paper decision to cast him as a junior version of the ballsiest renegade of the blockbuster epoch.

Variety‘s Steven Gaydos has tweeted a point he made in a 2.26.18 Guardian article titled “Ripe For A Kicking: Hollywood’s Love-Hate Relationship with Rotten Tomatoes. The thrust is that critics have become more and more whore-ish over the last 10 or 15 years.

“Critics have trained themselves to [pretend to] take seriously movies that they don’t take seriously because the danger is not having a job and not being ‘relevant’, being aged out of the discussion.

“The numbers bear out this trend. The median Tomatometer score for movies grossing more than $2 million was 51% during the 2000s and 53% during the 2010s. In 2017, though, the year of crashes such as Baywatch and Pirates of the Caribbean 5, the median was 71%. Either critics are enjoying movies more or movies are better than ever.”

Uhm, movies are not better than ever, or weren’t the last time I cheoked.

Sturgeon’s law doesn’t quite apply to the movie realm. 70% of films tend to be underwhelming, weak, bad, formulaic, dispiriting or numbing. 15% tend to be fair, decent, pretty good, passable. 10% are usually good to very good, and less than 5% are brilliant or epic or genius-level. This is how it usually shakes out, year in and year out. One out of four.

Anyone giving thumbs-up reviews to more than 40% or 50% of releases is being overly generous, and I myself am being generous in using this term.