Sometimes columnists have to stray afield to find something to write about, so I’m not condemning Variety‘s Kris Tapley for delving into Darth Maul’s cameo in Solo: A Star Wars Story. Tapley isn’t an out-and-out fanboy but now and then he’s conveyed fanboy yearnings, and discussing the character path and backstory of one-dimensional asshats like Darth Maul is what turns these guys on.

It takes all sorts to make a world. I understand and accept this. But on the other hand…really?

To millions upon millions of Star Wars fans, Darth Maul is one thing and one thing only — the scowling, acrobatic, horn-headed, black and red tattoo-faced shithead with the double-headed lightsaber. As a “character” he’s nothing, nothing…less than nothing. He also reminds everyone of the deeply despised prequels and particularly The Phantom Menace (’99), in which DM appeared and then was sliced in half by Ewan McGregor‘s Obi-Wan Kenobi. (Which Monsieur Maul “survived”, by the way, because the makers of the animated Clone Wars series wanted to use him again in 2011.)

But if you’re a semi-fanboy like Tapley, Darth Maul is like “oohh, cool…let’s talk more about this guy!”

Tapley is all but fascinated by the Darth Maul saga, so much so that he describes a 10-year unaccounted for period in his story as “juicy.” From this point on, any further usage of the term “juicy” by Tapley will be regarded askance if not with skepticism. Rules of the game. 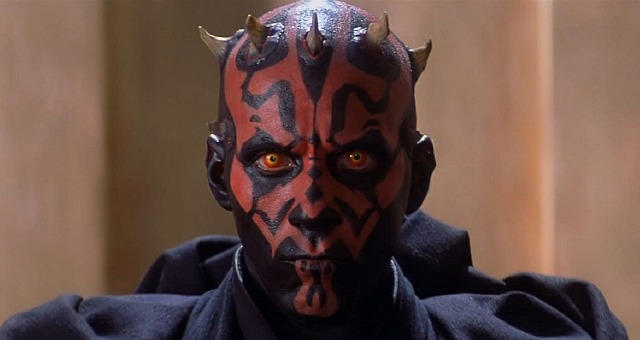