Qualifier #1: Even from the fanboys, the consensus seems to be that Solo‘s first act is clunky and that it takes a while (what, 30 to 40 minutes?) to find its footing but once Donald Glover arrives and “the Kessel Run heist plot kicks in, it’s a whole lot of fun.” There’s also agreement that it takes a while to settle into Alden Ehrenreich‘s Han Solo (i.e., mini-Han) but that you just have to accept that the young-Harrison-Ford template is out the window and that Ehrenreich is playing Jake Gittes. Qualifier #2: All I’ve said from the get-go is that Ehrenreich is a bad fit for the part, but I’ve projected nothing at all about the film itself. Qualifier #3: I’m concerned that Bradford Young, Hollywood Elsewhere’s second-least favorite cinematographer for his tendency to make everything look slightly murky and covered in pea-soup, is Solo‘s dp. 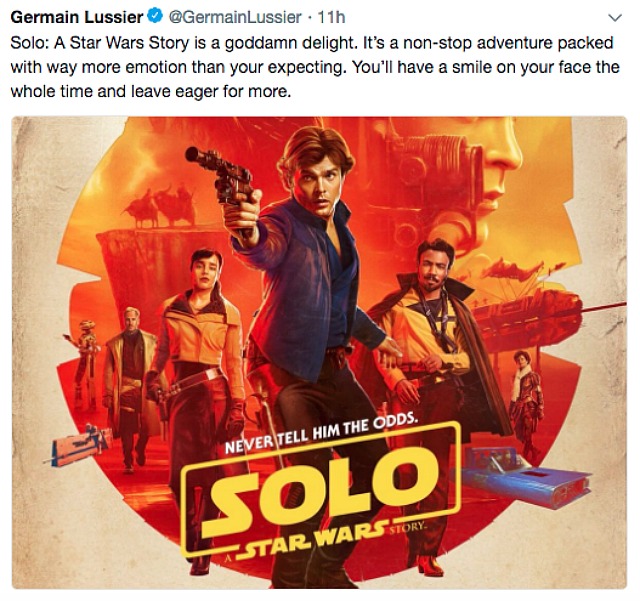 May 11, 2018by Jeffrey Wells51 Comments
« Previous post
Son of “If You’re Gonna Whack Someone”
Next post »
Heading Out The Door…