I don’t disagree with James Cameron‘s recent claim that the science-fiction genre has long been unfairly dismissed by Academy members as “not humanistic enough, not about real people” and therefore not Oscar-worthy.

When he gave this quote, however, Cameron chose to sidestep the fact that movies haven’t really produced a body of films that could be called science fiction, certainly not by the purist or literary definition of that term. What they’ve invested in is sci-fi fantasy, and more precisely CG-driven pulp-popcorn fantasias based on comic-book superheroes and the “hero’s journey” myth made famous by Joseph Campbell‘s “The Hero With A Thousand Faces.”

For the most part this attitude or approach has resulted in populist sludge that hasn’t begun to warrant serious consideration outside of the Saturn awards.

What Cameron really means, of course, is that a once in a blue moon a sci-fi fantasy flick like Avatar is good enough to be nominated for Best Picture (which it was eight years ago), and that his forthcoming Avatar sequels might warrant the same consideration.

Cameron: “All movies are artifice. Movies are innately artificial. The truth underlies the artifact. The truth of what you’re saying is the connection with the audience. Science-fiction can do that like any other genre. There is science-fiction that plays by the rules of good drama and that is important conceptually and that says something about our society and that has great characters. The Academy just has a blindspot about it. They’ll award it technical stuff but not the real stuff, not the acting.” 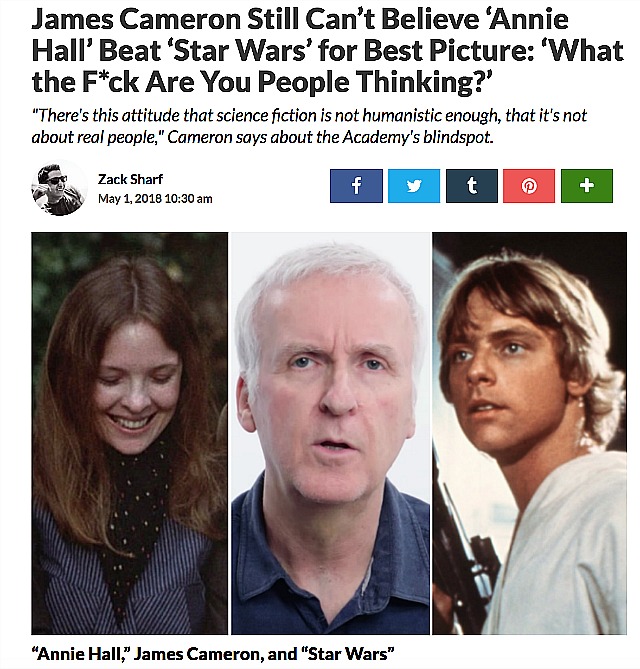