From Frank Bruni‘s “Robert Mueller, You’re Starting to Scare Me,” posted on 5.22: “By my reckoning, there’s already proof of attempted obstruction of justice, but that’s receding in a thick fog of collateral nefariousness and a teeming cast of unsavory opportunists. It may also be why Donald Trump’s mantra is ‘no collusion, no collusion, no collusion.’

“Contrary to what his aides reportedly murmur, Trump is no idiot. He knows that if he sets the bar at incontrovertible evidence of him and Putin huddled over a Hillary Clinton voodoo doll, he just might clear it. And he knows that if Americans are fixated on collusion, they aren’t concentrating on much else. That’s good for him and terrible for the country.

“He could be entirely innocent of soliciting or welcoming Russian help and he’d still be a proudly offensive, gleefully divisive, woefully unprepared plutocrat with no moral compass beyond his own aggrandizement. While we obsess over what may be hidden in the shadows, all of that is in plain sight.”

Incidentally: Evgeny Freidman, a Russian immigrant business partner of Trump’s personal lawyer Michael Cohen, has reportedly agreed to cooperate with prosecutors in investigations. In exchange for this Freidman will avoid jail time. The thinking is that he’ll provide information that will intensify pressure to make Cohen flip on Trump. But look at Freidman already. The mafia vibe, those heavily tinted glasses, the closely trimmed ‘stache and chin whiskers, the white collar and the fat, loosely-knotted, champagne-colored tie. One glance and you know he’s up to something. 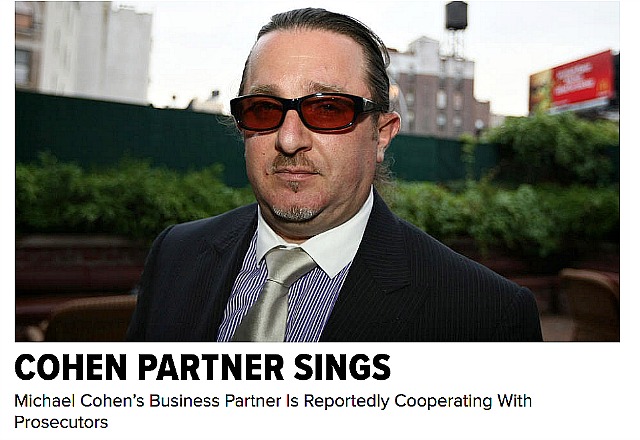 May 23, 2018by Jeffrey Wells34 Comments
« Previous post
Aliens In A Cow Pasture
Next post »
Son of Brando Death Bubbles