The Cannes jury press conference happens today (Tuesday, 5.8) at 2:30 pm, but there’s nothing to see until Asghar Farhadi‘s Everybody Knows screens this evening. It screened last week for Parisian press, and the loose talk during last night’s La Pizza gathering was that it might be on the “meh” side. One journo said he’d heard it was similar to Farhadi’s About Elly, another said something about it being Farhadi’s Personal Shopper or — I’m reaching here — possibly in the vein of Almodovar’s Volver. The general feeling is one of slight apprehension rather than excitement. 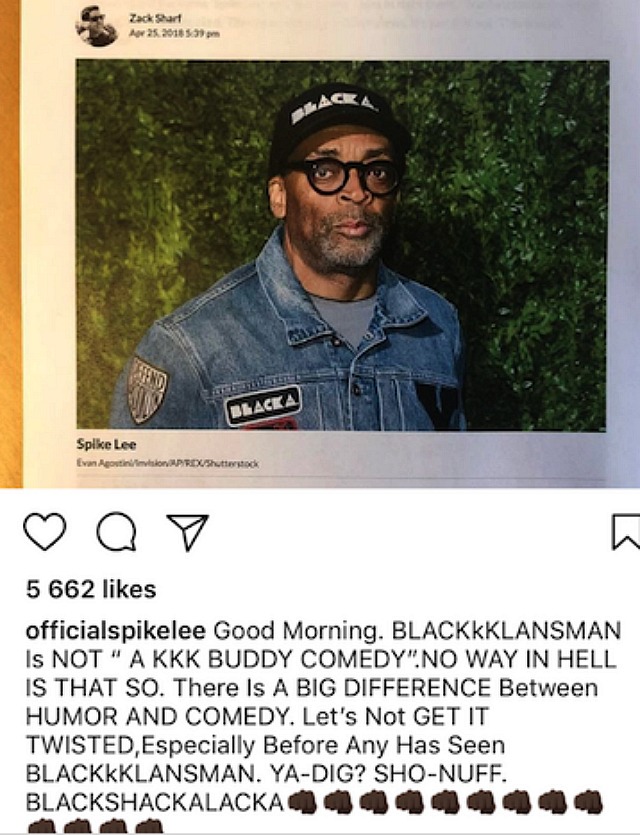 One of the above said he can’t be specific, but that he understands that a major American film is probably going to get booed. Which is not a difficult achievement here, and is sometimes not that meaningful in the long run. (The journalists who booed Personal Shopper a couple of years ago look like idiots now.)

If the “going to get booed” thing is correct, the likeliest candidates would be David Robert Mitchell‘s Under The Silver Lake, which runs 139 minutes, or Spike Lee‘s BlacKkKlansman. They’ll debut roughly a week from now (Lee’s film on 5.14, the Mitchell the following day). The possible booing recipient could also be Ron Howard‘s Solo: A Star Wars Story.

The BlacKkKlansman rumor is that it’s a “buddy comedy,” but Lee did his best to shoot that notion down on Instagram [see above].

A friend who saw Under The Silver Lake some time ago: “Loved [Mitchell’s] Myth of the American Sleepover, and really like It Follows. I like some of Silver Lake” — presumed to be kind of an impressionistic cultural panorama of present-day hipster Los Angeles a la The Big Lebowski with a dash of Fellini Satyricon — “and I love Riley Keough, but Andrew Garfield is so flaccid and without any charisma or sexuality, and this movie really needs that. There are some great fun sequences and it certainly looks great, but all in all it just feels silly with a donut hole in the lead role.”

I’m making a point of catching Jim Cummings‘ Thunder Road, a father-daughter drama that was well received during South by Southwest 2018 and is screening on Saturday evening under the ACID Cannes program.

The impression I got last night is that Lars Von Trier‘s The House That Jack Built hasn’t inspired apprehension as much as dread.

There’s said to be special interest in Gaya Jiji’s My Favorite Fabric, an Un Certain Regard section from Syria/Lebanon that “deals in female sexuality in times of turmoil.” Boilerplate: “Set on the eve of the Syrian war and inspired by Luis Bunuel’s Belle de Jour (’67), Jiji’s debut feature focuses on a young Syrian bride-to-be who gets drawn into the world of her mysterious madame neighbor.”