After attending last night’s Paul Simon concert at the Hollywood Bowl, journalist Joel Stein tweeted that “The Boxer“, a 1969 tune from Bridge Over Troubled Water, presented a problem for the delicate ears of his nine-year-old son.

The song “isn’t too smooth with the way [Simon] desperately works in his confession that he had sex with prostitutes,” Stein tweeted. “Thanks, Paul Simon, for not playing it at my 9 year-old son’s first rock concert.” Perhaps Simon didn’t play “The Boxer” last night, but why wouldn’t he have? Simon did two or three nights ago [scroll to 11:30 mark on below video] and sang the lyric in question, “I do declare there were times when I was so lonesome I took some comfort there” — i.e., with “the whores on Seventh Avenue.”

Imagine a nine-year-old boy being raised by a dad who wants to protect him from a mild little lyric like Simon’s. I was leafing through nudie mags when I was eight and feasting my eyes on bodacious ta-ta’s. Stein’s son is in for a rough patch when he hits his teen years. His dad is a pearl-clutcher. 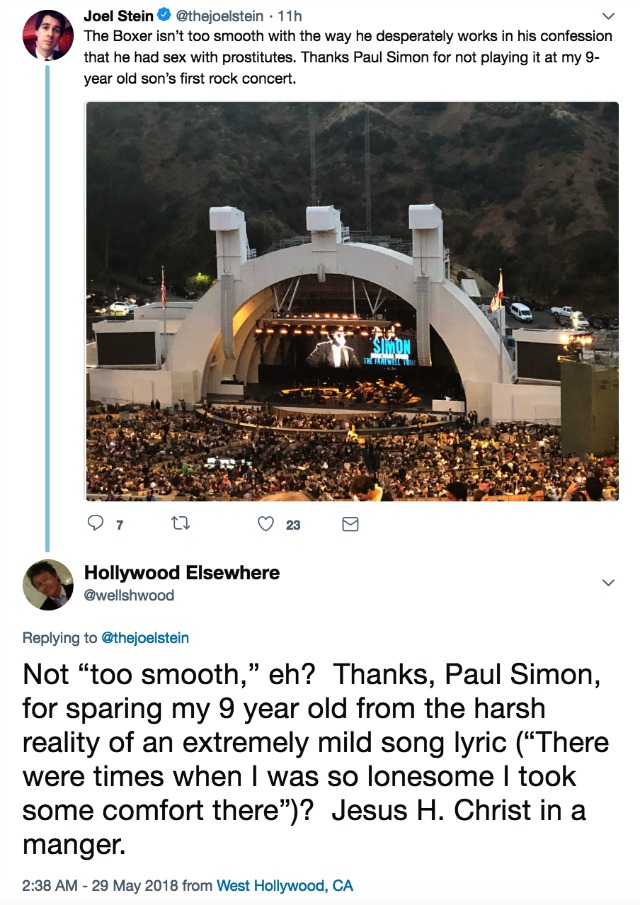