For a scene in his currently filming Once Upon A Time in Hollywood, Quentin Tarantino recently re-dressed the Cinerama Dome with advertising for Bernard L. Kowalski‘s Krakatoa, East of Java, a stinker disaster flick that opened on May 14, 1969. It was only up for a single day, I’m told — last Tuesday (6.12). 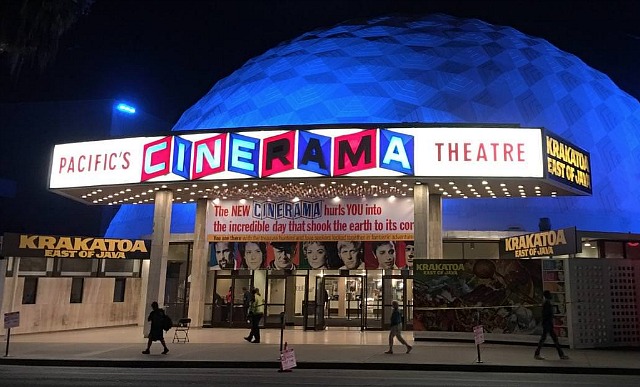 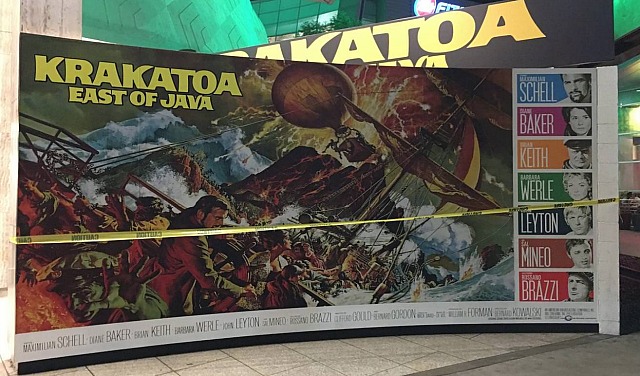 “Which is worse? A heartless, soulless blockbuster with no wit, intelligence or shelf life, designed solely to milk money from moviegoers in the quickest and most cynical way possible? Or a film which presents itself to be a poignant, intelligent, moving work of art, only to emerge as a bloated, pretentious, self-indulgent piece of crap? For most of us, the obvious answer is the former. But that all changes once you’ve seen The Deer Hunter.

“At the risk of slowly making myself unpopular, let me be perfectly clear from the outset. The Deer Hunter is a truly hateful film, a badly-written, badly-directed, poorly-acted piece of garbage, at turns boring, racist, mawkish, churlish, pretentious and manipulative. It is in a very select group of films which are almost unendurable due to length, structure, tone and content. It is an utterly hollow experience which leaves its audience somewhere between slipping into a coma and erupting into blind fury.” — Daniel Mumby, Three Men on a Blog, posted on 12.9.10.

I haven’t asked to see the opening episodes of Taylor Sheridan‘s Yellowstone (Paramount Network, 6.20), the sprawling, Montana-shot, big-ranch, family-conflict drama starring Kevin Costner, but I can at least convey that it’s gotten creamed by the critics — 50% on Rotten Tomatoes, 62% on Metacritic. I wouldn’t dare to summarize, but there are gripes galore.

I’ve finally figured out that on Direct TV, the Paramount Network is channel #241 so I guess I’ll tune in. Maybe. We’ll see.

Costner plays the somewhat taciturn John Dutton, a half-tough, half-laid-back Big Daddy brah in a black cowboy hat. Weary hangs the bison head. Everybody wants a piece of his land or his soul, some more than others. His four grown children, corporate developers, Native American activists, Montana politicians. It’s that kind of ensemble.

I’ve read seven or eight reviews so far, and my favorite is by EW.com’s Darren Franich. That’s where the above line is from. I’d go so far as to call his review hilarious.

“He discovered them because there was a tree stump on his property that was bothering him, and he tried to pull it out with a tractor, and then he just used dynamite. And now John himself is here, theorizing that the dinosaur was probably killed by a prehistoric shark. One thing I wasn’t expecting was Kevin Costner talking about dinosaur-eating sharks.

“Strange things keep happening to Kayce. Later in episode 2, he’s going for a drive with his wife (Kelsey Asbille), and they’re driving by a random house, and that house explodes. ‘Meth lab’s my guess,’ Kayce drawls, as he runs toward the explosion. So now Yellowstone is just a show where houses blow up sometimes.

10 Comments
Dad’s In the Dark

From Todd McCarthy’s THR Sundance review, filed on 1.24.18: “The first thing people will always say about Searching (Screen Gems, 8.3) is, ‘Oh, yeah, the film that’s completely set on a computer screen.’ But if it were just that, it would be far from enough.

“Impressively, first-time filmmaker and former Google commercials creator Aneesh Chaganty has also made a real movie, the story of a family that morphs into a crime drama that gradually ratchets up the tension as all good thrillers must, one that’s well constructed and acted as well as novel in its storytelling techniques.

“[The pic] is like spending a little over an hour-and-a-half on the internet, except that a mind perhaps more wily than yours is organizing your online voyage. Early on you’re made to feel that you’re in good hands, such is the technical and dramatic expertise Chaganty, co-writer Sev Ohanian, editors Will Merrick and Nick Johnson (what a job they must have had!) and the rest of the team pour into this novel enterprise.

“Unavoidably, perhaps, Search starts feeling more like a conventional suspense film once the deep probe for information on the internet is over and the film enters real time and a possible resolution; there are a lot of present-tense cutaways to TV coverage and a reliance upon surveillance coverage cameras. By this time, too, some of the novelty has also begun to wear off, but there are a couple of good twists in a plot that’s pretty solid strictly from a crime story point of view.

“In all respects, what Chaganty and his team have pulled off here is something both novel and accomplished.” Rotten Tomatoes, 100%, Metacritic 81%. 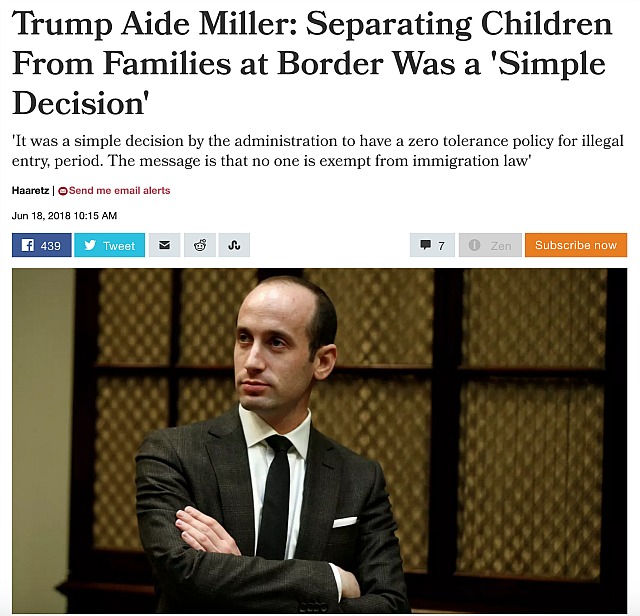 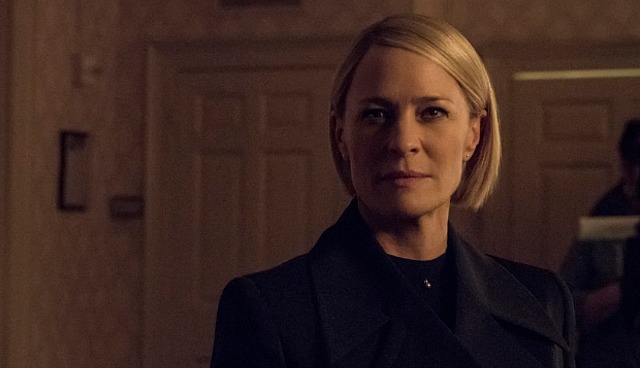 The main thing about Eugene Jarecki‘s The King is that it’s less of a “rise and fall of Elvis” film than a meditative road-trip essay about the cultural decline of the U.S. of A. over the last…oh, call it 60 years. But with doses of music and feeling and irony and currents of straight talk. It’s a stirring musical sermon. How did we get here? Then vs. now. The bloat, the denial, the loathing…a nation arguably more at war with itself than at any time since the Civil War. Paul Simon rewrite: “We’re empty and aching and don’t know why.”

Well, actually we do. The same forces that gradually enveloped that young and jumpy Memphis rocker who exploded in the South in ’55 and then nationally in 1956 with a blend of rockabilly and white-boy soul…the musical-spiritual aura that defined him gradually dispersed, and then selling out became the be-all, the chimes of irrelevance…shitty movies, Las Vegas gigs instead of touring the country, Dr. Feelgood medication, endlessly beholden to Colonel Tom Parker, huddling with the Memphis mafia behind Graceland gates. A flamboyant, increasingly perverse, go-for-the-dough lifestyle that pretty much drained and ate him. 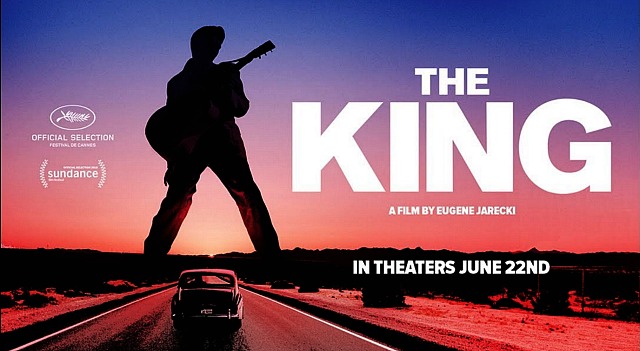 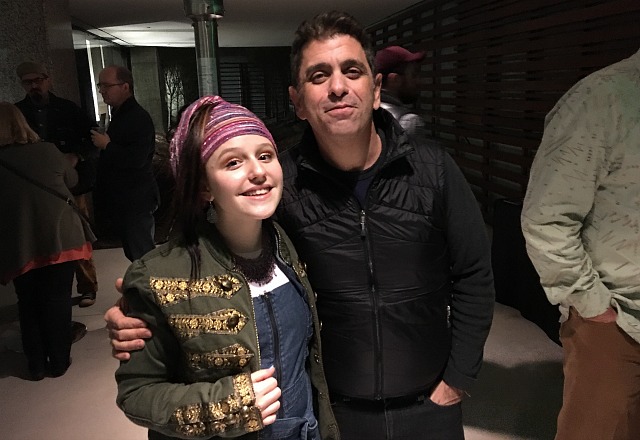 It can’t hurt to repost the official synopsis: “A musical road trip across America that explores how a country boy lost his authenticity and became a king while his country lost its democracy and became an empire.” 27 words. Marketers would say trim it down. “A half-musical, all-visual poem about how the Las Vegas aesthetic swallowed America in the same way it swallowed Elvis Presley.” Still too long?

As noted everywhere, The King itself was trimmed after its world debut at the 2017 Cannes Film Festival, when it ran 117 minutes. Now it’s around 97.

My first viewing of The King happened three and a half months ago inside United Talent Agency headquarters. In a HE piece that posted on 3.6 (“King of Drain“), I said I was “pretty close to knocked out — touched and shaken to the depths of whatever — and I’ll eat my black Kenneth Cole desert boots if it doesn’t become a Best Feature Documentary nominee next January. It’s that good, that bell-ringy, that profound.”

I was actually a tiny bit sorry when The King ended.

Far Alamo is another meticulous mash-up from Fabrice Mathieu, the director-writer who made Darth by Darthwest and Master of Suspense a couple of years ago. HE to John Wayne, Clint Eastwood, Henry Fonda, Charles Bronson, Richard Widmark, Eli Wallach and the rest of them: who cares if the giant alien bugs occupy an outpost in the middle of nowhere? Run for the hills — it’s your only chance.

Mathieu to HE: “It was more difficult to do but, as you can see at the end, it’s not really finished…a second wave of tankers (big bugs) will arrive!”

What’s going on with MGM’s longstanding lack of interest in restoring Wayne’s 70mm The Alamo? The latest news, I’ve been told, is that they’re still not interested. I thought that after the departure of the appalling Gary Barber that things might loosen up, but nope. A source confides that MGM is still refusing to consider pooling forces with an outside party (like, say, Kino Lorber or Criterion or Martin Scorsese‘s The Film Foundation) because they feel this would make them look like a insubstantial outfit that needs “crowd-funding” (their alleged term) to restore one of their titles. MGM to world: Let The Alamo die!