“A Religion That’s Begun To Lose Its Faith”

Here are two brilliant post-Solo-catastrophe riffs, but be honest — would The New Yorker and Variety have run these assessments if Solo had somehow connected and become a huge hit a la Last Jedi?

From Joshua Rothman‘s “The Growing Emptiness of the Star Wars Universe,” posted in The New Yorker on 5.31.18: “Early in William Gibson’s novel ‘Pattern Recognition,’ from 2003, Cayce Pollard, a highly paid professional ‘coolhunter,’ wanders through a London department store. Pollard is hypersensitive to the semiotics of brands: when a product is lame, she feels it physically, as a kind of pain. In the basement, she stumbles upon a display of clothes by Tommy Hilfiger. Recoiling from the ‘mountainside of Tommy,’ she thinks, ‘My God, don’t they know?’ 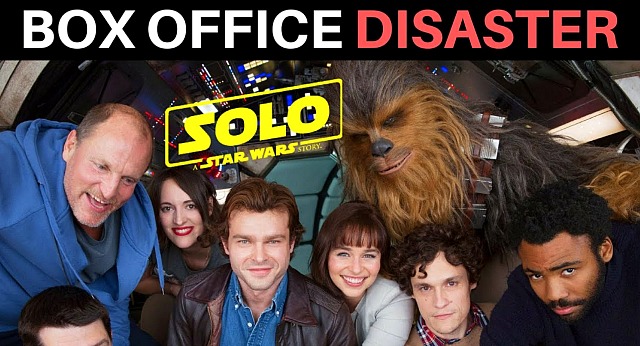 “This stuff is simulacra of simulacra of simulacra. A diluted tincture of Ralph Lauren, who had himself diluted the glory days of Brooks Brothers, who themselves had stepped on the product of Jermyn Street and Savile Row…but Tommy surely is the null point, the black hole. There must be some Tommy Hilfiger event horizon, beyond which it is impossible to be more derivative, more removed from the source, more devoid of soul.

“I thought of this scene this weekend, after watching Solo: A Star Wars Story. “Solo” is an entertaining movie, with engaging performances, vivid production design and enthralling action sequences. It’s also distressingly forgettable — it’s about nothing, an episode of Seinfeld with hyperdrive.

“In ‘Pattern Recognition,’ Pollard wonders if Hilfiger’s blandness might be the source of his appeal: where most preppy clothes are freighted with meaning, Tommy allows you to look preppy without actually being that way. Similarly, Solo evokes Star Wars without quite being it. It isn’t the ‘null point’ of the franchise, but it’s close.”

From Owen Gleiberman‘s “Why the Tanking of Solo is a Force of Darkness for Star Wars,” posted by Variety this morning:

“There have now been 10 Star Wars films, and right up until Solo, each and every one of them produced the kind of box-office grosses that were potent enough to bend the universe with the magnetic power of their the-whole-world-is-watching! hegemony.

“Each time, a ritual was enacted: a financial/spiritual spectacle of mass adulation. The Star Wars movies were all, in essence, sequels to the original Star Wars (even the prequels were sequels), and what they did wasn’t merely to ‘continue the story.’ They revived the feeling, each time, of letting you join a club of moviegoers that was the biggest club there is: Star Wars fans. Otherwise known as: Everybody. Otherwise known as a new breed of American pop-cultural fascism. The kind where everyone’s on board, and no naysayers are allowed. The nonstop tsunami of audiences that [came] out to see these films validated their status as biblical entertainment events. They exist on their own supreme mass-audience level of populist transcendence.

“The failure of Solo blows a hole in all that. It brings the relationship between Star Wars movies and their fans crashing down to earth. It’s the first Star Wars film whose box-office performance says: This is just another movie. Another installment in another cinematic universe that provides another hour of diversion for another substratum of entertainment consumers who don’t finally care that much whether all of this really means anything.

“It’s possible, and even probable, that some Star Wars fans have been feeling those whispers of underlying apathy for a while. But the box-office performance of Solo makes it official that Star Wars is a religion that has begun to lose its faith. The faithful may still show up for a while, but that only indicates why they may ultimately fade away: The business of worship should never become a habit.”

HE postscript: Henceforth and for the rest of their lives, Solo producer Kathy Kennedy and the woefully miscast Alden Ehrenreich will henceforth be known as “the killers” — the two people who did more than anyone else on the planet to undermine the Star Wars franchise and lower its spiritual stock value, the duo who led the faithful down a bad rabbit hole and injected a kind of deflation, a kind of poison.

June 3, 2018by Jeffrey Wells113 Comments
« Previous post
Don’t We All?
Next post »
A Scene That Sticks In The Mud of the Mind