Ari Aster‘s Hereditary is one of the most unsettling 21st Century horror flicks I’ve ever seen. It ends on a crazy-as-fuck note, but it turns your blood into crimson ice. In my book it stands alongside John Krasinski‘s A Quiet Place, Robert Eggers‘ The Witch, Jennifer Kent‘s The Babadook and Andy Muschietti‘s Mama, not to mention Roman Polanski‘s Rosemary’s Baby and Jack Clayton‘s The Innocents. And almost all the critics feel the same — 94% and 87% on Rotten Tomatoes and Metacritic, respectively.

And yet — hold onto your hats and drop a Percocet — mainstream horror fans have given it a failing grade according to the curve. Right now Hereditary has a D-plus rating on Cinemascore.

A few days ago Daily Beast critic Nick Schager complained that Hereditary isn’t wild or crazy or gorey enough. In response to this, I wrote that “something tells me that mainstream (i.e., grunt-level) horror fans will be saying the same thing when it opens, following in the path of The Verge’s Tasha Robinson.”

Posted on 5.22.18: “Not to paint with too wide a brush, but horror-genre fans tend to be on the coarse and geekish side in terms of their preferences. They’re basically about a general opposition to subtlety or understatement of any kind. Which is not to imply that Hereditary errs on the side of understatement. It certainly doesn’t during the second half. But the first half is almost a kind of masterclass in how to deliver on-target chills and jolts through fleeting suggestion rather than the usual sledgehammer approach.”

What happened? How in the name of Christ can a film as scary as Hereditary end up with a D-plus? 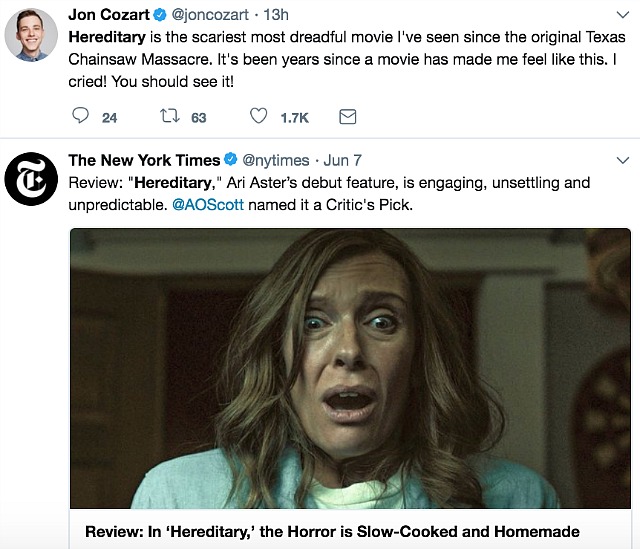 June 9, 2018by Jeffrey Wells71 Comments
« Previous post
Unfortunately, Maher Is Right
Next post »
How Whompa Is “First Man”? How Phil Kaufman Is it?