Nightmare From Half-Century Ago

It’s hard to set aside time to read a book when you’re already putting in several hours a day on a column plus the usual chores, reveries and occasional screenings. Last night I nonetheless read five or six chapters of Seymour Hersh‘s “Reporter“, which hit stores less than two weeks ago. I read the ones about Hersh serving as an Associated Press Pentagon reporter and as press secretary for the presidential campaign of Eugene McCarthy in late ’67 and ’68, and two chapters about his breaking the My Lai massacre story — “Finding Calley” and “A National Disgrace.”

Of course and indisputably, “Reporter” is a page-turner. First-rate writing and reporting — pruned to the bone, no wasted words. I was completely hooked and immersed, and then appalled all over again when I got to the Calley chapter. After I finished I found “Finding Calley” in a recent Harper’s post. 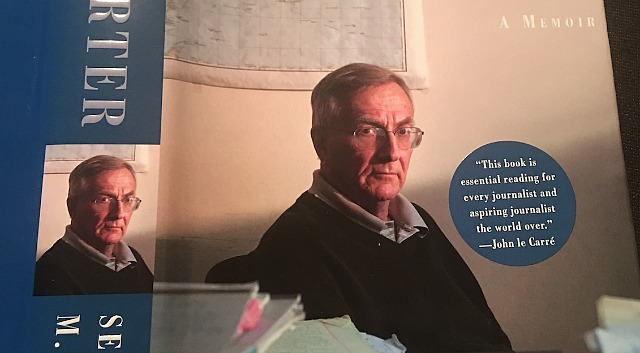 Remember that scene in Full Metal Jacket in which a blustery helicopter gunner regales Private Joker (Matthew Modine) and Rafterman (Kevyn Major Howard) with stories about how he “sometimes” mows down women and children, etc.? That was, of course, the My Lai sensibility, albeit diluted for mass consumption.

Hersh: “One GI who shot himself in the foot to get the hell out of My Lai told me of the special savagery some of his colleagues — or was it himself? — had shown toward young children. One GI used his bayonet repeatedly on a little boy, at one point tossing the child, perhaps still alive, in the air and spearing him as if he were a paper-mache pinata. I had a two-year-old son at home, and there were times, after talking to my wife and then my child on the telephone, when I would suddenly burst into tears, sobbing uncontrollably. For them? For the victims of American slaughter? For me, because of what I was learning?”

Hersh’s initial My Lai report broke on 11.12.69. He wrote about the atrocity in “My Lai 4: A Report on the Massacre and Its Aftermath” (’70), but a long excerpt in Harper’s appeared a few weeks before that. Hersh had interviewed nearly 50 Charlie Company perpetrators. The initial indictment said that 109 My Lai (or Son My) villagers had been murdered — the figure was actually 504. Two years later a second Hersh book, “Cover-up: The Army’s Secret Investigation of the Massacre at My Lai 4“, was published.

I visited the My Lai Massacre Museum, which is built right upon the actual village where it all happened, five and a half years ago — on 11.22.13. It felt exactly as bad as I expected it would be, but I had to do it. I had been to Dachau a year and a half earlier.

Here a 3.30.15 New Yorker Hersh piece about visiting the memorial — “Scene of the Crime.”