Not Best Drug-Dealing Drama Since “Traffic”, But Close

By the standards of a violent drug-cartel drama and particularly those of a sequel in this realm, Stefano Sollima‘s Sicario: Day of the Soldado is, for me, a serious knockout. I can’t call it a great film, but I can certainly tag it as beautifully calibrated pulp with a surprisingly strong heart. Given what I expected due to the somewhat low Rotten Tomatoes score of 68% (due to bizarre pans by Indiewire‘s David Ehrlich, TheWrap‘s William Bibbiani and Screen Crush‘s Matt Singer) it’s surprisingly, almost mind-blowingly good.

For me it’s much better than Denis Villenueve‘s Sicario, which was seriously compromised by Emily Blunt‘s tedious, pain-in-the-ass female FBI agent. Rock-steady, dead-on performances by Josh Brolin and particularly from Benicio del Toro and the young Isabela Moner anchor this sequel, which for me felt far more assured, poignant and suspenseful than the 2015 Villenueve film, which I never warmed to all that much. Not to mention more purely cinematic. You can just tell right away when a director really knows what he/she is doing, and this is one such occasion. 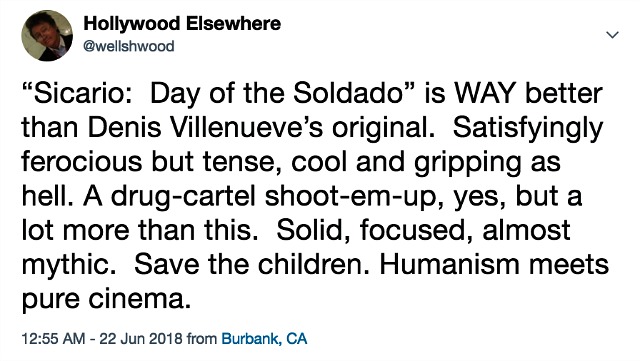 I strongly suspected that Soldado was an X-factor keeper less than five minutes in. I was absolutely certain of its excellence after ten minutes. Then it kept getting better and better and I kept whispering to myself “wow, wow…wow.” Until, that is, slight problems began to manifest in the second and third acts. But they weren’t enough to change my mind,.

The weakness, as others have noted, is that Soldado slows down in the middle section and goes a little crazy in the third act (but in a fascinating, holy-shit way). The other issue is that the ending doesn’t feel like a true-blue, well-earned crescendo as much as a story that just screeches to a halt with an invisible title card that reads “to be continued in Part Three.”

But God, the current of cool malice, dead-center confidence and absolute cinematic command that Sollima delivers — a feeling of purpose and absolute mastery of all the forces and currents, and with a Taylor Sheridan screenplay that gradually shifts away from drug-war brutalities to focus on humanism and compassion and saving children from horrible lives, particularly Moner’s character, a young daughter of a drug cartel kingpin (who’s never even seen!), as well as a poor border-town kid (Elijah Rodriguez) who early on accepts cartel money to work as a coyote guiding illegal immigrants across the Rio Grande.

For a film that delivers scores of cold-blooded shootings and bombings amid bureaucratic malice or indifference, it’s quite odd how Soldado dovetails into a focus on south-of-the-border compassion and, strange as this may sound in a drug-war context, parenting. Really. Soldado slaughters people by the truckload, but it cares about kids. 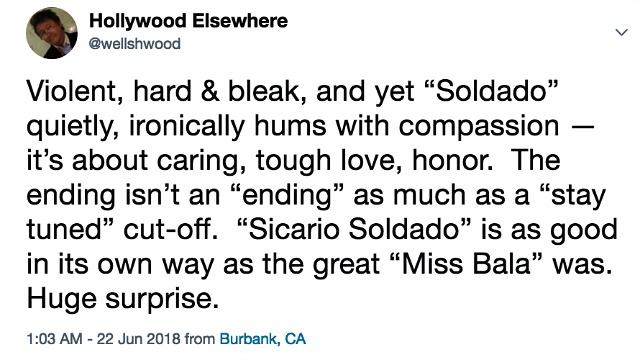