What a wonderful week it’s been. The applicable term is Ongoing Traumatic Stress Disorder. A constant bombardment by SJW mortars and grenades, first from the wolverines and then from a platoon of Outraged Millennials who wanted me dead and disemboweled because I said that Kyle Buchanan‘s description of Brie Larson‘s The Unicorn Store (which I didn’t see during last September’s Toronto Film Festival, and which has no distribution as we speak) sounded “worrisome.”

I actually said it “might” sound worrisome “in some circles,” which obviously allows that other circles might be cool with it. Yup, that’s all it took to inspire a stoning from the zealots. Buchanan’s words: “A charming, colorful, unabashedly girly coming-of-age movie.”

It was the “unabashedly girly” that prompted the “uh-oh.” But it was really the idea of any film unabashedly catering to the sensibilities of any specific group or perspective. I have concerns about any movie that sounds lopsided, excessively focused on a certain mindset or persuasion, or lacking a certain God’s-eye neutrality. I would be just as reluctant to see a film that’s been described as “unabashedly alpha-male” or “unabashedly septugenarian” or “unabashedly red-state.”

Yesterday’s comment from “Downtown Vibe” came to mind: “This is [a result of] having been taught within their groupthink bubbles that anyone with a different opinion is part of an establishment which exists only to be dismantled, and those who challenge their orthodoxy are to be any combination of ignored, dismissed or demonized.”

Roger Thornhill to Phillip Van Damm: “I don’t suppose it would do any good to show you a wallet full of liberal-progressive articles and essays…lamenting the pro-franchise, pro-remake scheme of today’s corporate overlords…singing the praises of anything and everything that’s actually good…being trashed for panning The Birth of a Nation after its first Sundance screening…pleading for David Jones and Harold Pinter‘s Betrayal to be streamed after being a home video no-show of over 30 years…celebrating the glories of Hanoi, Paris, Rome, Prague and Shreveport…singling out the X-factor brilliance of Jonah Hill…tirelessly advocating for the 1.37 version of Shane and persuading Woody Allen to support this…celebrations of the greatest 160 films…praising First Reformed…standing up to Prometheus…worshipping action films that actually adhere to the laws of physics…lamenting Chicago, The King’s Speech, The Artist…championing Alfonso Cuaron‘s Children of Men…worshipping Guillermo Del Toro‘s Pan’s Labyrinth, The Orphanage, Mama, The Devil’s Backbone…worshipping straight-friendly gay films like Brokeback Mountain and Call Me By Your Name.”

Van Damm to Thornhill: “You are a symbol of everything that’s vile and corroded about Hollywood journalism, and sooner or later my legions will pull you off your horse, chop you into pieces and feed your entrails to the dogs.”

Posted on 1.28.17: “Bill Maher is obviously 100% dead-on, but the ugly fact is that in today’s Twitterverse, a realm of politically correct wild dogs looking to rip your flesh and consume your intestines over the slightest hint of an infraction…the ugly fact is that daily columnists like myself have to occasionally walk stuff back.

“Not with some whiny-ass ‘apology’ but a straight, subdued admission along the lines of ‘okay, maybe I could’ve phrased that with a little more sensitivity.’ You have to at least be open to an occasional admission of this or that shortcoming, first and foremost because I make little mistakes all the time. Nickle-and-dime missteps of phrasing, slight errors of judgment, etc. The trick is to catch them on my own or, depending on the situation, admit error when called out. If, that is, I’m actually in the wrong, and that’s a big ‘if’ so watch it. 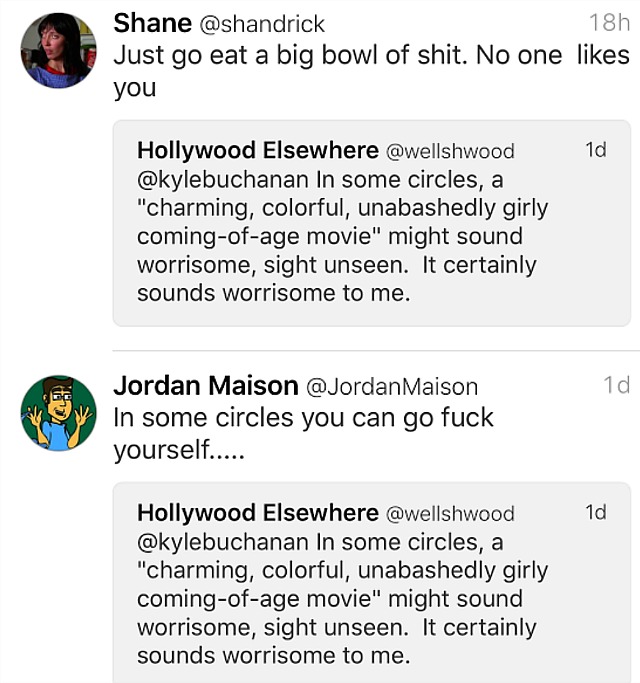