In a 6.28 Guardian article, Anne Billson seemed to be responding to David Thomson’s 6.21 London Review of Books essay about Alfred Hitchcock‘s Vertigo (“Vertigo After Weinstein“), which was somewhat disapproving.

Billson doesn’t name Thomson, but he’s the only major critic who has recently questioned whether Hitchcock’s 1958 masterpiece is an acceptable fit in the #MeToo era. Thomson basically said that given Hitchcock’s creepy attitudes toward women on-screen (and his behavior toward Tippi Hedren in the early ’60s) he doubts Vertigo will be #1 again when Sight & Sound critics vote in 2022. 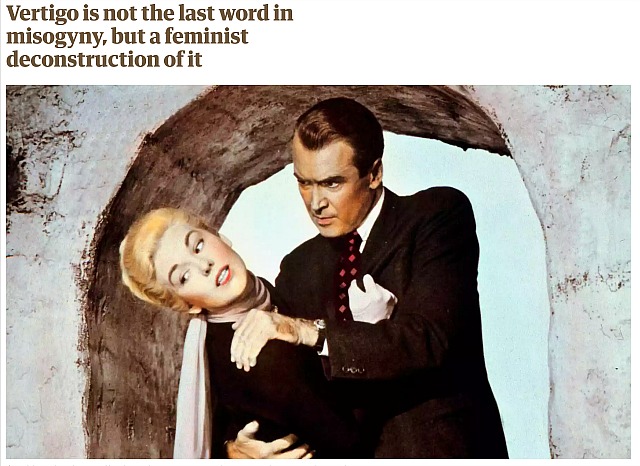 The crux of Billson’s argument is that Hitchcock created many strong and perceptive female characters, and that many of his male characters are weak and vacillating. “For a so-called misogynist, his films feature a lot of intrepid heroines,” Billson writes. “Even when the women are nominally just love interests, they are unusually plucky and quick-witted.” An accurate observation.

“If, in some quarters, Hitchcock and his films are still considered the last word in misogynistic creepiness, Vertigo is exhibit No 1,” Billson states. “‘Look how strong and stable the male characters are,’ says one critic (I’m paraphrasing but not by much), while describing the female characters as simultaneously ‘unhinged, duplicitous and submissive puppets‘ — which would be quite a feat if it were true.”

I haven’t found that “puppets” quote in Thomson’s piece, but maybe I skimmed too quickly.

In fact, a good portion of her article recounts charges of perversity and misogyny that have been thrown at Hitchcock. She seems to be saying “not so fast” but the general impression I got was that she sees Hitchcock and his creations as complex and conflicted.