My first viewing of Mission: Impossible — Fallout (Paramount, 7.27) was last Monday evening inside a gargantuan IMAX theatre within Loews’ Lincoln Square. My second viewing will happen an hour from now inside a 180-seat Bowtie Cinemas theatre in Wilton, Connecticut. (Here’s my earlier review.) A couple of days ago I mentioned to a Bowtie guy where I’d seen the film in Manhattan, and he replied “Uhhm, we can’t compete with that.” I was actually kind of surprised to see this little multiplex in operation at all. I thought local cinemas were dying. Any and all reactions are welcome below. 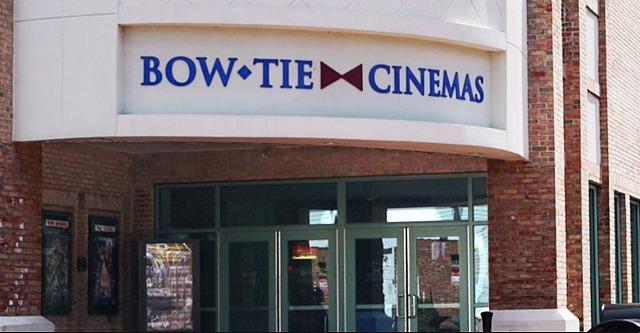 Unfortunate technical issue, posted at 11 pm on Thursday, 7.26: I’ve just come back from my second viewing of Mission: Impossible — Fallout. After catching it at Loews’ Lincoln Square in beautiful full-blown IMAX last Monday evening, tonight I saw it inside a spiffy little Bowtie Cinema in Wilton, Connecticut. It was okay — decent-sized screen, 180 seats, nice popcorn, etc.

Except for one significant problem, I mean.

One of the things I loved about the IMAX sections (the HALO and the helicopter finale) at the Lincoln Square was how the image suddenly got taller, shifting from 2.39:1 aspect ratio to 1.75:1. I would’ve preferred an even taller a.r. (1.4:1 would’ve been great) but whatever.

The Wilton Bowtie house doesn’t have adjustable screen heights, so I was naturally expecting that during the HALO and helicopter scenes the 2.39:1 aspect ratio would shift to 1.75 by cropping off the left and right sides.

Guess what happened during these two sequences at the Bowtie? The 1.75 image wasn’t created by side masking. Instead it was stretched horizontally by the projection system, and so it filled out the full 2.39:1 width via distortion, and so suddenly everyone had the mumps or had gained weight. And it just took me right out of the movie.

It appears as if Fallout‘s DCP has been incorrectly geared or formatted. When the 1.75 aspect ratio is supposed to kick in with side masking, it doesn’t. Instead everything suddenly looks like it’s been horizontally stretched like turkish taffy.

Did anyone in the audience notice this problem besides me? Probably not. Audiences are sheep. But imagine having worked your ass off for months and months on this film, making sure that it all looks exactly right, and then it shows in rural areas in a way that diminishes the kapow effect.

I’m figuring that if this distortion happened at one little theatre in Fairfield County, it might be happening at hundreds or thousands of little theatres around the country. Who knows?