I felt a slight surge of excitement when I first heard that a woman was climbing up the Statue of Liberty. How can anyone scale a smooth copper statue that doesn’t have any footholds to speak of? Then, of course, the headline turned out to be bullshit. Seven or eight people with Rise and Resist had unfurled an anti-ICE banner at the bottom of the statue, and were then arrested. Then a single woman wearing bright pink shoes climbed up to the base of the statue, and the news media went crazy. Except it was nothing.

Rise and Resist organizer Martin Joseph Quinn told CNN that the woman in question “climbed without our knowledge…it was not part of our action…we are deeply concerned for her safety.” Deeply concerned about what? A woman sitting and chatting with the cops who had climbed up to the same area on a ladder. And yet Liberty Island was evacuated, and at least a couple of news networks treated the incident as a possible act of terrorism.

“Nocturnal Glow of Southern Manhattan,” posted on 4.19.16: “I’ve recalled this before, but during the summer of 1980 I was part of a press contingent that was invited to watch the after-dark filming of John Carpenter‘s Escape From New York on Liberty Island.

“The gang was out in force — bearded and scruffy Kurt Russell in his Snake Plissken garb, costars Season Hubley and Adrienne Barbeau (who was married to Carpenter at the time), producer Debra Hill. Things began with a well-catered yacht party. By the time it ended everyone had at least half a buzz-on. As some of us prepared to leave to watch Carpenter and Russell shoot a scene under the shadow of the Statue of Liberty, Russell got up and addressed the throng: “We’ve had a great time, we’ve loved having you here…now go home!” And everyone laughed their guts out. It was that kind of mood, that kind of party. 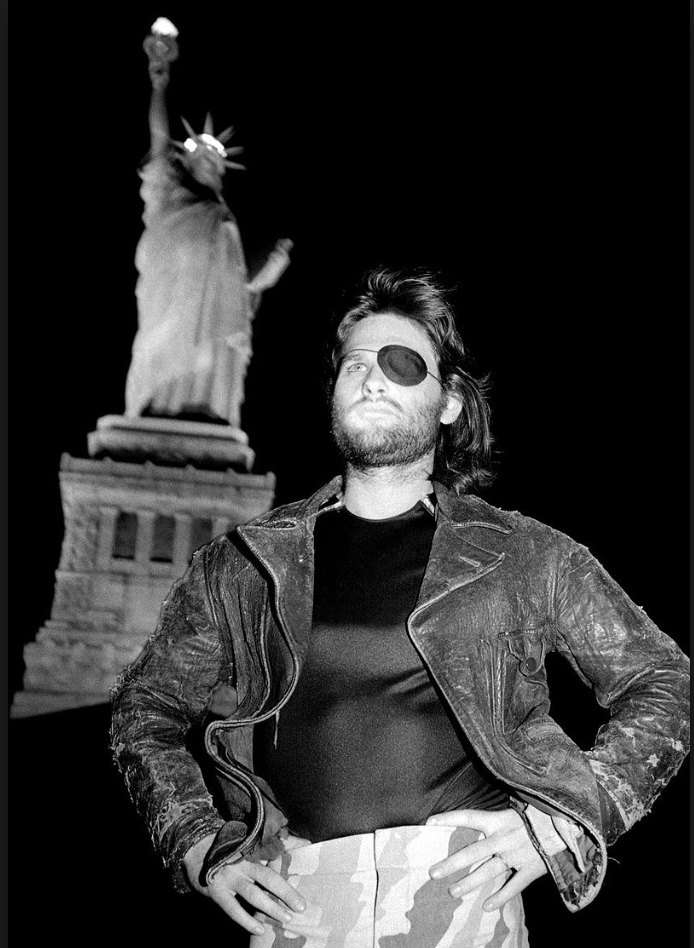 Kurt Russell during filming of the Statue of Liberty sequence in John Carpenter’s Escape From New York. The night shoot happened sometime in July or August of 1980, or so I recall. The film came out in ’81.

“I wrote my piece for The Aquarian, an alternative New Jersey weekly that’s still going. Here’s a little anecdote that will give you an idea what it was like to collaborate with my stuffy editor, whose name was Karen something-or-other. During the yacht party I overheard Barbeau say to Carpenter, ‘I have some whites for you, honey, if you need some,’ and so I put it in the article. Karen scolded me over the phone for including such a potentially litigious anecdote. ‘Thank God I caught that and took it out!’, she said. ‘What were you thinking?’ I was thinking, Ms.Tight-Ass, that whites (i.e., Benzedrine or some derivation of) are relatively harmless prescription drugs and that adding this line gave the piece a little inside flavor, directing being a tough job that keeps you up into the wee hours, etc.

I’ve also mentioned before that hotshot Indiewire editor-columnist Anne Thompson was part of the PMK publicity contingent that organized this event.