Bane Of My Existence

My iPhone 6Plus wasn’t charging a few weeks ago, so I went to a West Hollywood guy on Melrose. He fiddled with the charging unit…simple. He also said that my blue-plastic charging cord (one of those knock-off types you can buy at CVS and car washes) would eventually be a problem for me, and that I’d be better off with a $19 Apple charging cord. Unfortunately those white cords always crack apart and have to be taped up after three or four weeks of use.

“I hate those white Apple cords,” I told the guy. “They never last and the Apple stores charge about ten times what they’re worth.” The guy nodded and said, “Yeah, I know, but they’re the only kind that seem to give a really good connection.”

A few days ago a Quora guy wrote that “the 16 pins on the iPhone lightning connector are not soldered in place…they’e simply kept in place by the surrounding soft plastic/rubber. This makes it easier for these pins to bend out of place if the cable is twisted more often.”

If Apple would just manufacture a tough cord that works as well as those $19 rubber whiteys but doesn’t crack open, I’d buy it in a heartbeat. I’ve bought pricey non-Apple cords at Apple stores (the kind that are covered with striped threaded insulation) but they always seem to crap out also. I’ve probably bought 30 or 40 charging cords over the last five years. 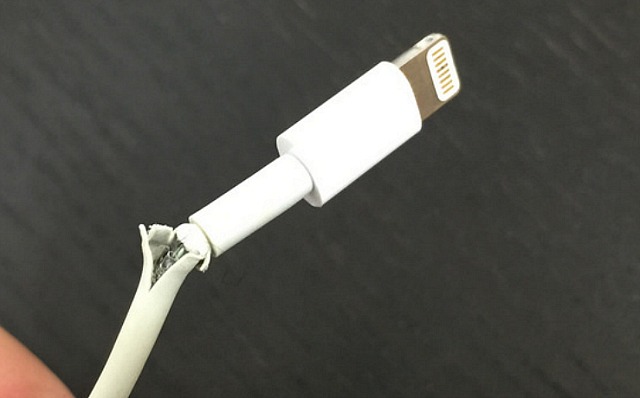