The Annapurna release has no release date, but will probably pop through at the Venice, Telluride or Toronto film festivals — i.e., some combination thereof. 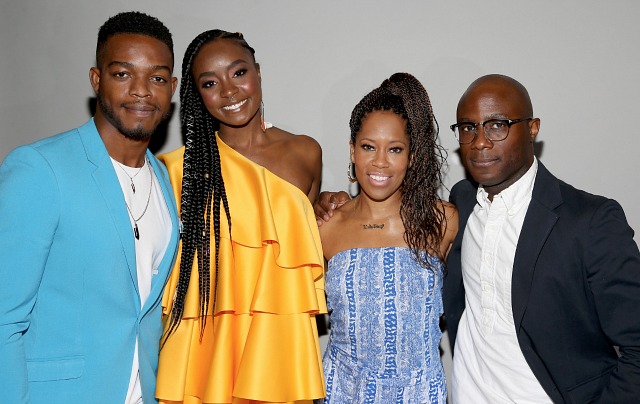 Based on the 1974 James Baldwin novel and set in early ’70s Harlem, Beale Street is about difficulties faced by Tish, a 19 year-old, and Fonny, a 22 year-old sculptor, and their extended family. Fonny is unjustly accused of raping a Puerto Rican woman, Victoria Rogers (Emily Rios), and is sent to prison. Soon after Tish discovers she’s pregnant. She, her family and her lawyer struggle to find evidence that will free Fonny before the baby is born.

Morales: “The first clip showed all the principal cast in the house of Kiki’s parents. It happens right after Stephan has been taken to jail and everyone is talking about his young lawyer. Stephan’s parents come in (Beach and Ellis) and it’s clear that his mom and dad are different from one another. Mom is very church-like and strict while dad curses in front of others and says his foul language is considered hip. There’s a lot of tension in the room when Kiki talks back to Steph’s mom.

“The second scene, apparently a flashback, shows Stephan and Kiki hanging at a Spanish restaurant where he says hi to Pedrosito (Diego Luna). It’s raining as he walks Kiki outside, and then asks her to come home with him.”

A guy who heard from a guy who saw Beale Street says it’s “art-housey…very theatrical and in line with Fences. Feels mostly like Barry adapting a book that was very personal to him. Even smaller than Moonlight and told in overlapping voiceovers, saturated cinematography and lots of montage. Stephan James is the best in show and very charming. The fact that this film deals with sexual assault in an inconclusive manner may turn out to be an issue in this, the #MeToo era.”