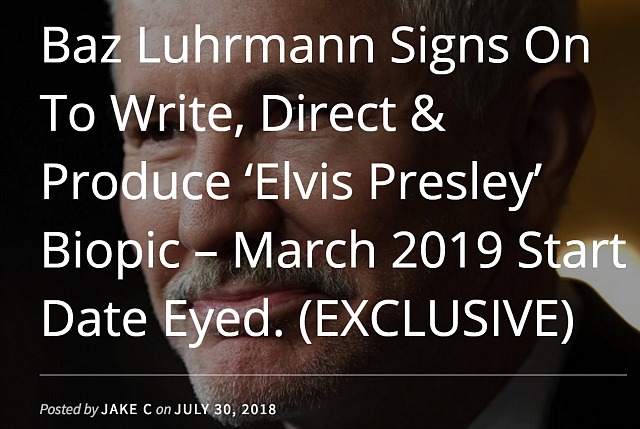 Posted on 8.11.07: “One of the lousier scripts I wrote in the ’80s (i.e., good concept but lacking a decent third act as well as that forward-propulsion and clarity that all good screenplays have) was called Tupelo Honey, and I never understood why someone else didn’t try and do something like this. Maybe someone did and it just sucked.

“The basic idea was that aliens cruise down to earth in August 1977 and scoop up Presley just before he dies on the toilet at Graceland, leaving an immaculate genetic imitation to take his place. As one of their endless medical experiments, the aliens take Elvis up to the mothership and clean him out — the drugs and the fat and the poisons sucked out of his system — and then return him to earth all thin and primed and ready to go a few years later. In fact, they’ve de-aged him in the bargain. (Humans are always frozen in time in the company of aliens — remember those soldiers and sailors returned to the earth in Close Encounters? — and so the Elvis abductors have simply gone one better.)

“The problem is that Elvis can’t convince anyone that he’s The Man when he tries to get work. Even his former friends and ex-girlfriends don’t believe he’s the real deal. (Too thin, too healthy, too alive.) The best he can do is get hired in Vegas as one of the coolest Elvis imitators in the world, and he hates that. So he quits Vegas and goes back to Tupelo, Mississippi, to try and sort things out and figure what to do with the rest of his life. Elvis is resigned to not singing anymore so he takes a job driving a truck for a soft-drink company. He meets a nice girl, starts to fall for her, makes friends with a couple of good ole boy musicians, and then slowly begins to go through a music reawakening — finding himself again as a performer.

“I could never figure out what kind of music he’d get into, or how he’d get past the image problem of being seen as an Elvis Presley imitator…or what the overall solution would be. But if somebody were to come up with a decent third act for this thing and if someone else were to make the movie with the right cast, I’d pay to see it. I really like the idea.”

July 30, 2018by Jeffrey Wells14 Comments
« Previous post
Moonves Skates
Next post »
If Gunn Goes, We Go With Him