The chilling effect of the James Gunn Disney assassination (early-Obama-era tweets can detonate your present-day career) and the ScarJo Rub & Tug thing (cisgender actors cannot play transgender characters) have been kicked around by Deadline‘s Mike Fleming and Peter Bart.

Fleming: “[Industry execs] fear this desire to please loud special interest groups, given a bullhorn by social media, will spread to the point where you couldn’t make Brokeback Mountain or Dallas Buyers Club by casting straight actors like Jake Gyllenhaal, Heath Ledger and Jared Leto, whose desire to stretch and win awards made these films possible. 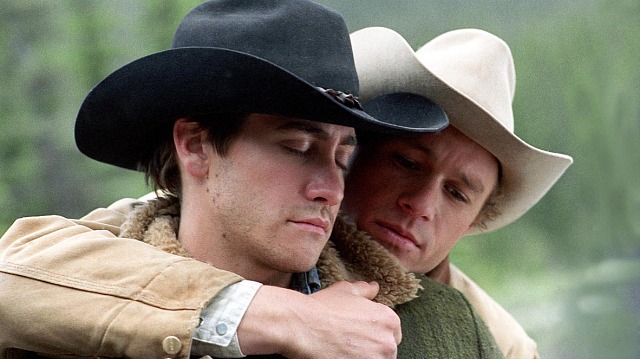 “Stars always represented the underrepresented in the Dream Factory. Daniel-Day Lewis in My Left Foot? Dustin Hoffman in Rain Man? Al Pacino in Scent Of A Woman? Tom Hanks in Philadelphia? I would argue these award-winning performances and movies I mentioned opened eyes and organically helped create empathy and tolerance by finding common ground. Would those actors and studios make these movies now and risk the shaming campaigns?

“Financiers are already inclined to favor films with sequel/blockbuster potential. They’ve now been given one more reason to kick these projects to the curb. This all could have been handled better but like the James Gunn mushroom cloud, these decisions are being made in real time out of fear of the white-hot social media chorus, and the blaring headlines of media eager to fan provocative stories. Deadline had one of its highest traffic days ever when we broke Disney’s dismissal of Gunn last Friday and it hasn’t abated. So I’m not saying we’re immune to the appeal of provocative copy. But I don’t think anybody was helped by the outcome on Gunn and Rub & Tug.”

Bart: “The constraints of the moment would surely have created huge obstacles for many past films that proved ground breaking. Consider Being There: Its message was that the next President of the United States would inevitably be an idiot (Peter Sellers) who could neither read nor write and who did little but watch television. Whoops. Apart from its dicey theme, both Sellers and Hal Ashby, its director, were erratic in their personal pronouncements and would have been annihilated by the social media. As it was, Being There (funded in 1979 by Lorimar Films, of which I was then the President) was rejected by two distributors and suffered from clumsy half-hearted marketing.

“Harold & Maude (’70) surely would have been clobbered today by suicide prevention groups. And I doubt whether any major distributor today would release a film about a love affair (consummated) between an elderly woman (Ruth Gordon) and a kid (Bud Cort). Paramount in that era operated like a gutsy indie studio that ignored outside pressures.

“A prime example [was] The President’s Analyst (’67), directed by Ted Flicker and starring James Coburn and which parodied the FBI. This was still the era when the FBI was the creature of J. Edgar Hoover, not a James Comey, and Hoover, always over-protective, assigned his agents to hover around the set and grill studio executives. The IRS also became an instant adversary. The movie was not a hit.”

Fleming: “You touch on the final point in this long-winded diatribe, and that is how this atmosphere will promote blandness and suppress bold executive decision-making. I was reminded by the creator of a groundbreaking sitcom the price paid by the Smothers Brothers when they fought and ultimately lost their attempt to politicize the Vietnam War on their network comedy series, or Richard Pryor and the battles he waged on his series, and Norman Lear and others who braved unemployment to push the envelope. Those gains could be systematically undone by the current climate, when corporations act rashly as Disney did.

“Does a movie like Airplane! get made now, where the hilariously creepy pilot played Peter Graves asks a towheaded child visitor to the cockpit if he likes gladiator movies or if he has seen a grown man naked? Will corporate owners of movie companies banish edgy fare to avoid headaches and protect stock prices?

“When Mel Brooks turned in his Blazing Saddles cut, Warner Bros had a chorus of high ranking execs who said, don’t release the film because it will embarrass the studio. Were it not for the advocacy of a maverick in the making, John Calley, that might have happened. Where are today’s Calleys, execs with the courage of conviction, who won’t wilt in the face of a social media outcry that might only last until the mob moves on to the next outrage?”