Gunn Goes Down Over Old Tweets

Variety‘s Brent Lang is reporting that director James Gunn has been whacked as the director of Guardians of the Galaxy, Vol. 3. You know why two portly Disney execs led Gunn into a garage-level den and then popped him….you know it. Because of “a series of offensive tweets” about pedophelia and rape, except they date back to ’08, ’09 and ’10.

I’ve read the decade-old tweets in question, actually sent out in ’08, ’09 and ’10. Gunn was unwise to tweet flip-perverse remarks about man-boy contact, but he was (a) partly alluding to being in the company of convicted pedophile director Victor Salva and (b) being outrageous, like irreverent Type-A creative types are from time to time.

Disney, the studio behind the Guardians of the Galaxy franchise, revealed the Gunn termination in the midst of San Diego Comic-Con. “The offensive attitudes and statements discovered on James’ Twitter feed are indefensible and inconsistent with our studio’s values, and we have severed our business relationship with him,” said Disney chairman Alan Horn.

I don’t know Gunn personally but I know people who do, and I’ve never heard him described as some kind of intemperate, jabbering idiot. You don’t get to become a successful director of expensive, geek-friendly fantasy flicks unless you’re smart and careful and know how to play the game. Yesterday Paramount TV honcho Amy Powell went down for a similar-type offense — said wrong thing, exacerbated SJWs, etc. Maybe she and Gunn should get together this week and trade notes.

Gunn apology: “Regardless of how much time has passed, I understand and accept the business decisions taken today. Even these many years later, I take full responsibility for the way I conducted myself then. All I can do now, beyond offering my sincere and heartfelt regret, is to be the best human being I can be: accepting, understanding, committed to equality, and far more thoughtful about my public statements and my obligations to our public discourse. To everyone inside my industry and beyond, I again offer my deepest apologies. Love to all.” 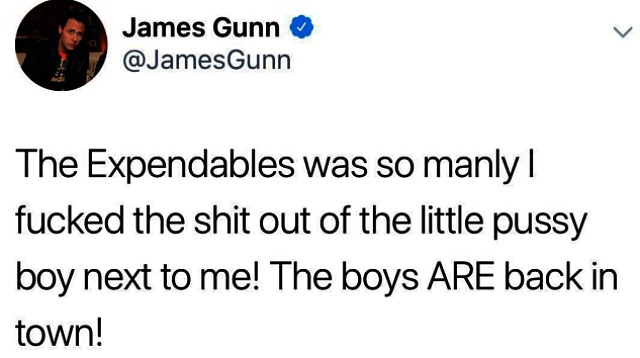