Variety‘s Kris Tapley is proclaiming that Joel and Ethan Coen‘s The Ballad of Buster Scruggs is no longer a six-part Netflix anthology series but a feature film using an anthology structure? Am I reading this right?

So a few months ago the Coens said to Netflix, “Sorry, guys, but that western anthology series we sold you on, that six-segment concept that might’ve run somewhere between three and six hours…sorry but we prefer the idea of a feature film with a six-chapter structure.”

In other words the Coens wrote six segments that would have minimally run a half-hour (or possibly 45 minutes or an hour) each, and then decided to trim each segment down to, what, 20-minute vignettes for a grand narrative total of 120 minutes plus main titles and end credits? And now they’re debuting the feature at the Venice Film Festival with Tapley and others hailing a new potential Best Picture contender?

10:10 pm update: “Actually, it was always a feature script,” a friend informs. “Then they had the idea to cut it up into a six-part series. One assumes that, in the end, this proved easier said than done.” 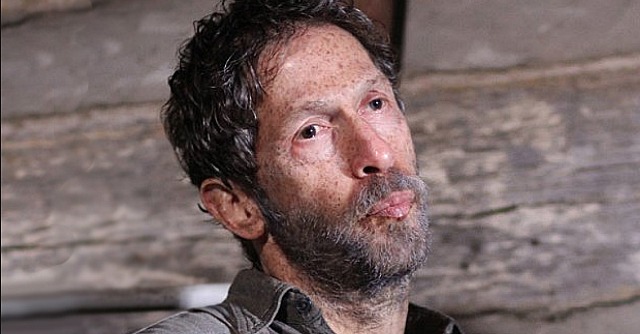 I don’t know if this is how Tim Blake Nelson will appear in Joel and Ethan Coen’s The Ballad of Buster Scruggs, but he definitely looks, uhm, ornery and scraggly.

Way back in the summer of ’17, when this here thang was a Netlix anthology series, the six segments were described as follows:

(2) “Near Algodones” — A high-plains drifter whose own fecklessness dogs his attempts at bank robbery and cattle driving, costarring James Franco, Ralph Ineson and Stephen Root;

(3) “Meal Ticket” — The story of an actor and impresario of a traveling show;

(5) “The Gal Who Got Rattld” — The story of two trail bosses on the Oregon Trail and a woman on the wagon train who needs the help of one of them and who might be a marriage prospect for the other, w/ Zoe Kazan and Jackamoe Buzzell; and

Liam Neeson and Brendan Gleeson are also listed as costars.

Here’s the thang: With the exception of Franco and Neeson, none of the Buster Scruggs cast members are leads — they could all be compassionately described as off-center, eccentric, funny-looking character types. So right off the top the film is charisma-challenged. No Josh Brolin, no Javier Bardem, no Frances McDormand, no Tommy Lee Jones, no George Clooney, no Jeff Bridges, no Hailee Steinfeld.

Official Coen statement: “We’ve always loved anthology movies, especially those films made in Italy in the ’60s” — i.e., RoGoPaG — “which set side-by-side the work of different directors on a common theme. Having written an anthology of Western stories we attempted to do the same, hoping to enlist the best directors working today. It was our great fortune that they both agreed to participate.”