It was announced earlier today that Steve McQueen’s Widows (20th Century Fox, 11.16) will open the BFI London Film Festival on Wednesday, 10.10. The fact that the screening is being called an “international premiere” suggests that the caper thriller will start things off in Telluride or Toronto.

Pic is based on Lydia LaPlante’s Widows mini-series that ran on British television in ’83 and ’85. Wikipage logline for McQueen’s film: “Four armed robbers (Liam Neeson, Garret Dillahunt, Jon Bernthal, Manuel Garcia-Rulfo) are killed in a failed heist attempt, only to have their respective widows (Viola Davis, Cynthia Erivo, Elizabeth Debicki, Michelle Rodriguez) step up to finish the job.” 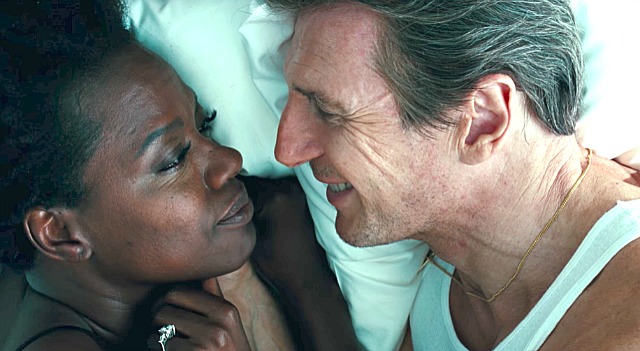 In what particular way[s] could Widows fit into the ’18/’19 awards season? From what I’ve been told, Viola Davis is more or less a slamdunk for a Best Actress nomination. A guy who allegedly saw an early cut has said that “Viola is the standout, a force of nature in a showcase lead role…and she’s so respected as an actress.”

I’ve assumed all along that McQueen, an esteemed art-film director (12 Years A Slave, Shame, Hunger), wouldn’t go slumming by directing a boilerplate robbery caper flick. I’ve been told that he hasn’t done that. I’ve been told that he blends the Chicago-based robbery plot with political commentary involving police brutality, political corruption (Colin Farrell‘s character racking up odious points in this regard) and Black Lives Matter. So you should most likely put out of your mind any thoughts of Widows being an Ocean’s 8 companion piece.