From Glenn Erickson‘s Cinesavant, posted yesterday: “The scary news is a report from correspondent Simon Wells, about the much-touted Christopher Nolan restoration of 2001: A Space Odyssey. I’d like to know if other readers have seen the show, and if their prints were different, or better. Here’s Simon’s note — actually, two notes I’ve shuffled together:

‘Hi Glenn, Just wondering if you happened to see the recent Nolan de-restoration of 2001 in 70mm in recent months?

“I did and was utterly horrified by the general murkiness, blown out white and general sludginess. The colour grade was horrible, the detail pitiful. The scenes inside the space wheel where Floyd talks to Rossiter and the Russians were blown out and looked abysmal. Worse still was the new teal and amber color grade, which I am assuming is how the upcoming 4K release will be presented. I don’t think I have ever seen [this film] look so bad. 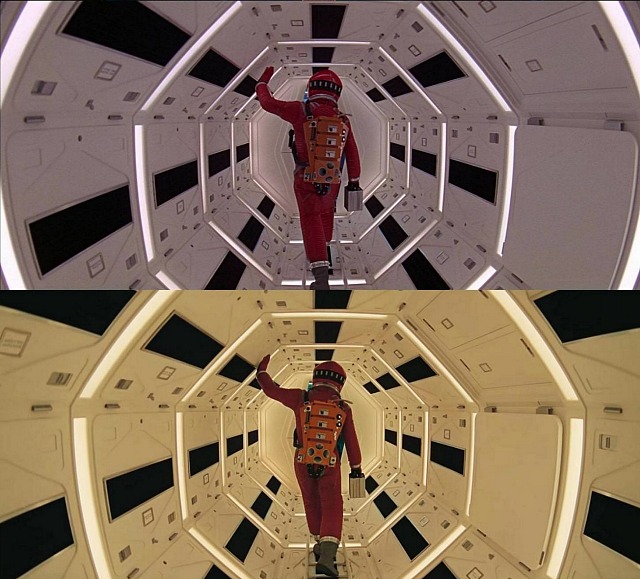 ‘Getting films you never thought you’d see on Bluray is great, but this kind of vandalism just depresses me no end. I’d be very curious to hear your thoughts. — Simon Wells’

Erickson: “Am I stirring up a non-issue, taking a reader’s evaluation on something I haven’t seen myself? The last time I saw 2001 on a big screen was at the 2012 TCMfest, and the 70mm print looked just fine to me; I’ve never seen a bad print, even in 35mm. I can say that the WB film management and restoration experts are some of the finest in the world, and that their 2003 remastering of Ryan’s Daughter was the most perfect film presentation I’ve ever seen. I’m all for celebrity filmmakers helping promote film restoration, but I’d hardly think that 2001 was being neglected.

“I am curious to get more feedback on the 70mm reissue, which I am told is a different animal than the special IMAX reissue coming up shortly. So if you saw 2001 in ‘Nolanvision’ please let me know!

“Thanks for reading! — Glenn Erickson”