The Highest-Grossing, Best Popcorn Movie Oscar “is the worst of these ham-fisted maneuvers because it’s such a condescending stance toward ‘popular’ cinema to take at a time when the Academy is making as many moves as possible to open the gates to all forms of cinema (i.e., waving in a thousand new members, being aggressively proactive on diversity in the voting ranks, etc.). It’s a stiff backhand to those efforts, in fact, because it outright states that popular films need to be ghettoized.

“It’s particularly troubling in the year of Black Panther, which just three days ago crossed $700 million at the domestic box office. Disney has taken the task of bringing Ryan Coogler’s critically acclaimed Marvel film into the Oscar fold quite seriously this year. A consultancy team was assembled early and that group has been laying the track ever since. Now here comes the Academy, establishing a corner to which voters can banish this and other films like it with a pat on the head and a ‘thanks for playing.'” 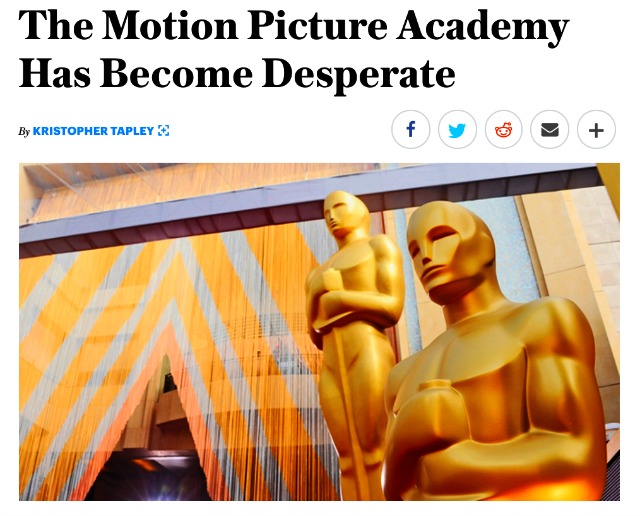 HE interjection: The only first-rate portion of Black Panther is during the last hour. Up until that it’s a colorful but unexceptional thing — a popular Marvel-stamped entertainment. It wouldn’t have won the traditional Best Picture Oscar — now it’ll most likely win the Best Popcorn trophy.

Back to Tapley: “Was there some internal panic that the movie might not be recognized otherwise? Is this a move to help carve out a place for it and therefore avoid a potential PR headache? Maybe. But, again, it’s a condescending move and it may have just undercut efforts to push Coogler’s film into competition with all worthy contenders, not just the ones that busted blocks. (And what an irony that would be if indeed Disney/ABC pushed for these changes.)

“Many of the Academy’s decisions these last few years have been met with criticism, both inside and outside the organization. But they have largely been defensible. Re-branding/identifying as a vast international group of film professionals is a good thing. Allowing more of those professionals than ever before to have a voice in the proceedings is a good thing. Drastically altering the demographic makeup of each new ‘class’ of voting members is a good thing.