This morning I decided to add a supplement. It comes (or came rather) from London designer Christopher Gibbs, a renowned interior designer, antiques dealer and fashion maven who died two or three days ago at age 80.

Taste, Gibbs said, “is something you catch, like measles or religion.”

18 years ago Christopher Mason explained that Gibbs “is a leading proponent of that elusive brand of anti-decoration, high-bohemian taste favored by self-confident Englishmen, a look based on well-worn grandeur, disarming charm and unexpected contrasts.

“The magic is in the mix of masterpieces and oddities — like an assemblage of refined and wild-card house guests who mysteriously combine to create the ideal convivial country-house weekend. The allergy here is to the banal, not to dust.” 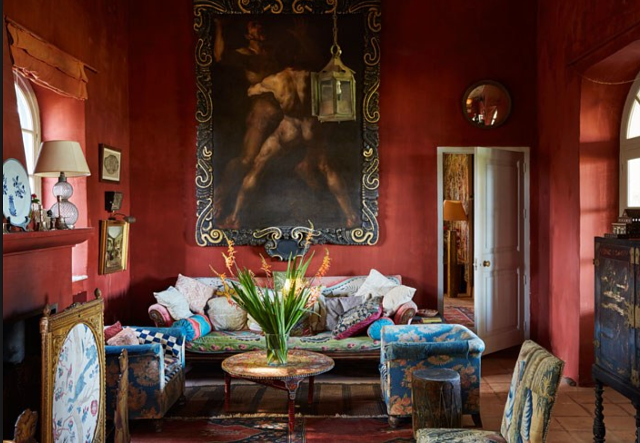 The Times obit, written by Sam Roberts, reminds that Gibbs’ Cheyne Walk home in London “was borrowed by Michelangelo Antonioni for the party scene in his movie Blow-up (1966) and by Kenneth Anger to shoot the occult film Lucifer Rising (’72).

Gibbs also designed what he called the “earthly paradise” inhabited by the has-been rock star played by Mick Jagger in Donald Cammell and Nicolas Roeg’s film Performance (’70). A similar aesthetic was used for the spacious vampire home occupied by Tilda Swinton and Tom Hiddleston in Jim Jarmusch‘s Only Lovers Left Alive.