In the interest of saving a few bucks, next week I’ll be driving to Telluride with hotshot Variety music reporter and AARP magazine film critic Chris Willman. We’ll begin our return trip on Monday, 9.3.

The Telluride Film Festival begins on Friday, 8.31, but you have to get your pass, buy groceries and get squared away the day before. We’ll be departing in the early morning of Wednesday, 8.29. The idea is to reach Gallup, New Mexico by dusk or thereabouts, and then cruise easy to Telluride the next day or Thursday, 8.30.

Chris has made this trip this several times and is therefore The Authority, but this is how it seems to me: 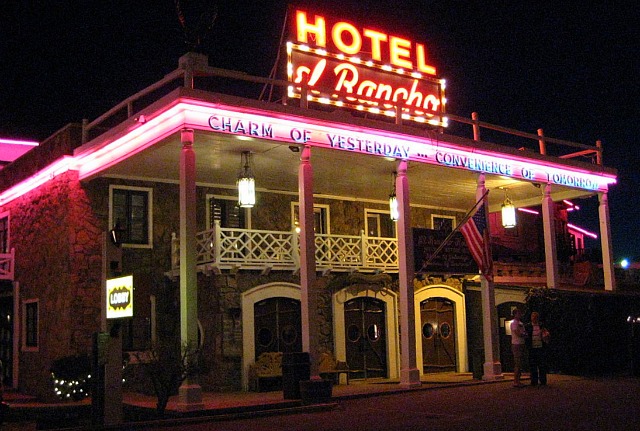 El Lay to Gallup is an estimated 9 and 1/2 hours, according to online authorities. Obviously the idea is to avoid L.A. rush hour traffic. That means leaving no later than 7 am or waiting to leave at 10 am. 7 am departure = 5:30 or 6 pm arrival with allowances for an extra 90 minutes for gas, rest stops, maybe a lunch. A 10 am departure = 8:30 or 9 pm arrival in Gallup with same allowances.

Right now we’re both leaning toward an early morning departure. Our current plan is to stay in Gallup’s Econo-Crap Lodge. Seriously, we’re looking at the El Rancho.

The Gallup-to-Telluride trip is estimated at 3 hours, 45 minutes. Call it four, four and a half hours with gas stops and whatnot. Leave at 9 am, arrive at 1:30 pm.

The webmasters of the Telluride Film Festival website are still running last year’s data, and the ’18 gathering begins 12 days from now. Hubba hubba, get the lead out, etc.