Kris Tapley and Ramin Setoodeh‘s 8.14 Variety piece about the recently announced “Best Achievement in Popular Film” Oscar (“Will Oscars’ Popular Film Category Generate Ratings or Just Controversy?“) is somewhere between sufficient and reliably dull, an article that says “buh-dop-buh-deep” over and over. But Rob Dobi‘s illustration made me see red.

My instant reaction: “Go eff yourselves, beasties…you are the low-rent apocalypse, the end of the road, the servers of formulaic jizz-whizz to the brah masses. If the ghosts of George Stevens, William Wyler, John Huston, F.W. Murnau, John Ford, Howard Hawks, King Vidor, Billy Wilder, Victor Fleming, Charles Laughton, Ernst Lubitsch and Ida Lupino were to somehow manifest and stumble into your presence, they would all spit in your faces. Leave by the side door, get outta town and stab yourselves with kitchen knives when you get home.” 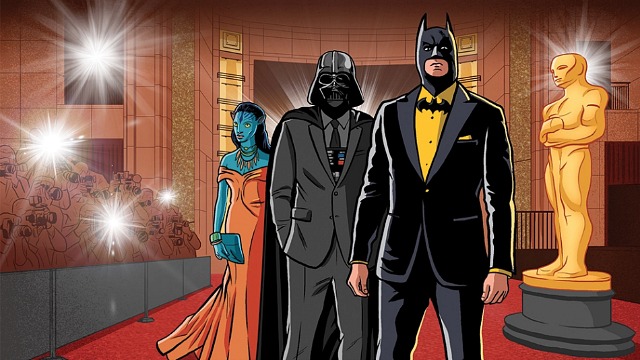 August 15, 2018by Jeffrey Wells45 Comments
« Previous post
Nobody Cares About Your Damn Lineage…Okay?
Next post »
A Tad Old-Fashioned, But Emotionally Trustworthy