Ramirez is claiming that during a drunken Yale party in ’83, or roughly a year after the Christine Blasey Ford incident when the 17 year-old Kavanaigh was in prep school, the future Supreme Court nominee unzipped and thrust his gross animal member in her face. Ramirez admits to being drunk herself when this incident allegedly happened, but c’mon.

Kavanaugh’s nomination was already on the ropes due to Ford’s claim of sexual-assault in ’82, but add the Ramirez allegation and his chances of serving as a Supreme Court justice seem pretty close to nil. How does he wiggle out of this?

What other interesting lead performances in high-profile films were based on either a previous performance or a well-known, real-life personality? All I can think of are (a) Albert Finney‘s Daddy Warbucks in John Huston‘s Annie (’82), which was partly based upon Huston’s manner and speaking style; (b) Peter Sellers‘ Claire Quilty in Stanley Kubrick‘s Lolita (’62), which obviously adopted Kubrick’s Bronx-taxi-driver patois; and (c) Tony Curtis‘s “Junior”, the fake Shell Oil heir who romances Marilyn Monroe‘s “Sugar” in Some Like It Hot, and all the while doing a broad imitation of Cary Grant. 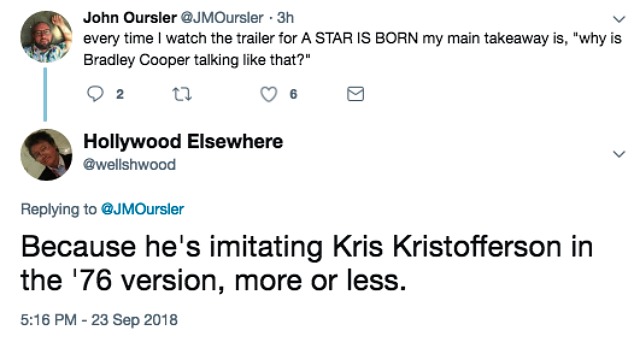 Is it fair to report that Michael Moore‘s Fahrenheit 11/9 opened soft this weekend? Revenue from 1719 situations came to $3,101,000, for an average of $1804 per screen. That’s not too bad, especially for a documentary, but it’s hardly gangbusters. Yes, the first-weekend tally was higher than any documentary earned this year. But let’s face it: Moore’s rock-the-world blockbuster days are probably behind him. 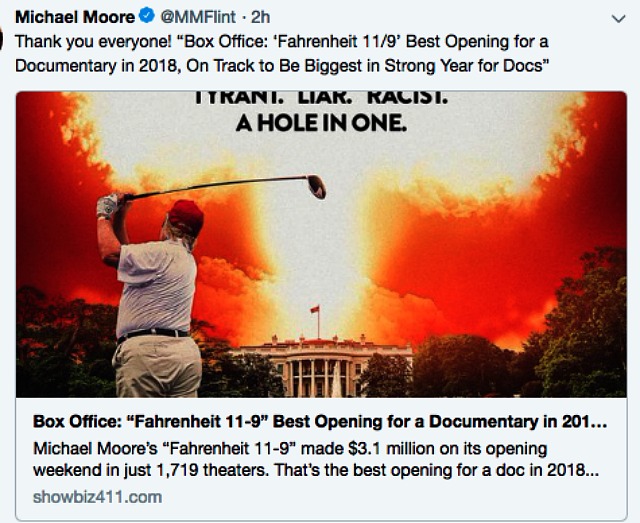 Jacques Audiard‘s The Sisters Brothers (Annapurna, 9.21) “is a grimy, gunky wad of episodic, half-comedic western nihilism — aimless, wandering, constant gunplay and fuck-all violence at nearly every turn. It ambles and shuffles along in a loose, tension-free way that tests your patience and has you begging for a conclusion at the one-hour mark. Unfortunately you have to sit there for another full hour.\

Everyone in the civilized world will be watching the cross-examining by Republican senators of Christine Blasey Ford next Thursday. And it won’t be pretty — let’s face it. On one hand the process allows for questioning by in-the-tank contrarians. On the other hand it is fair to ask for details and substantiation, etc. But the ugliness will be rank. It will almost certainly make a lot of people furious. And it’ll probably tip things even more in the direction of Democratic candidates a few weeks hence.

What bothers me is what those Florida women said the other day. They’d all bought into the “they were just teenagers, louche behavior is par for the course” rationale. Who are these women? What kind of course upbringing did they get from their families? Did they really witness an occasional case of attempted rape when they were in their teens, enough so that they regard this kind of thing as par for the course? 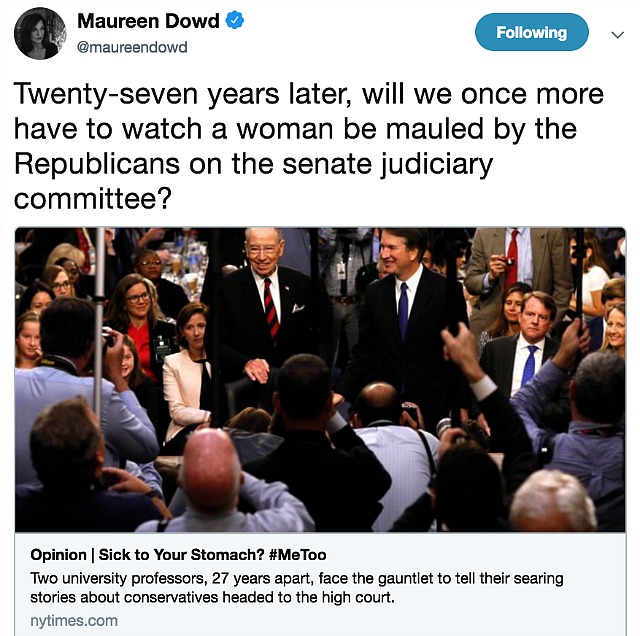 Go to the 36-second mark in this scene from Martin Scorsese‘s The Last Temptation of Christ, and particularly the moment when Willem Dafoe, sitting on the edge of a rocky cliff, says “I know what God wants…he wants to push me over!” As he says this the camera lunges over the edge and gazes at the rubble below.

Chloe Zhao, director of the critically acclaimed The Rider, has accepted a paycheck gig to direct The Eternals, a Marvel film based on a 1970s Jack Kirkby comic. The screenplay is by Matthew and Ryan Firpo; Kevin Feige is producing. Zhao is the second female to helm a Marvel movie after Captain Marvel‘s Anna Boden, who is co-directing with Ryan Fleck. Cathy Yan is the first Asian-American woman to direct a superhero movie with Warner Bros./DC’s Birds of Prey.

Last night Variety‘s Chris Willman posted a photo of the now-touring Fleetwood Mac “after their official live debut last night at the HeartRadio Festival in Las Vegas,” etc. In response to which “Lindsey Buckingham’s Army” replied, “What band are you talking about, Chris? The new band Fakewood Mac, where Lindsey was fired and then trashed by IA’s main hand puppet Stevie Nicks? Also, what were you even watching? Or did IA pay you to write this dribble?”

HE to Willman or anyone who might know: What does IA stand for? Indefensible Assholes? 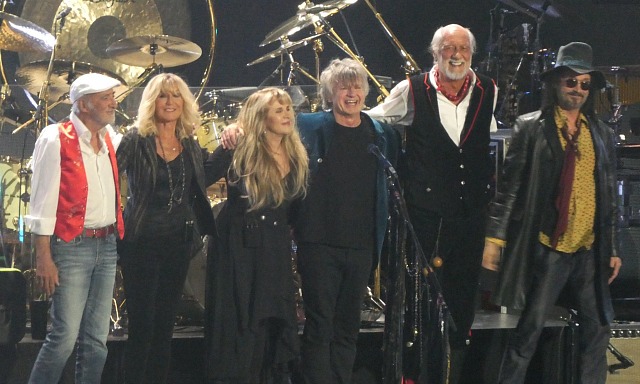 Jada Yuan‘s Vulture profile of Stevie Nicks reminded me that my ex-wife and I lived next to her in ’87 and early ’88. Our homes were way up in the hills on Franklin Avenue, and I presume this was during one of her coke periods because I remember she used to sing late at night, and with a heavily amplified system that was loud enough to disturb our slumber.

One night it was so loud that I said “eff it” and walked over and knocked on her door. It was something like 1:30 am, and as I approached her home I was thinking of a phrase that some rock journalist had used to describe Nicks: “The epitome of the pampered hippie princess.”

A pretty boy in a white T-shirt and jean cutoffs came to the door and I explained the deal. “It’s a little late, man…you know? Up until midnight, cool, but not at 1:30 am…okay?” He didn’t argue and went “uh-huh” and “yeah, I hear you” and that was it. Nicks never shattered neighborhood glass with her sonic waves again. Or at least not so I noticed.

The Best Picture situation right now (Sunday, 9.23) is all about jostling, elbowing, representation and advocacy. It can be safely presumed right now that the New Academy Kidz, whose guiding mission and philosophy is to celebrate genre films whenever possible as well as representation and identity politics at every turn, are in the tank for Barry Jenkins‘ If Beale Street Could Talk, Spike Lee‘s BlacKkKlansman, Ryan Coogler‘s Black Panther and Steve McQueen‘s Widows.

I admire and respect Quincy Jones as much as the next guy. He hasn’t done much since the ’80s, but he’ll always be cool. I was intrigued when I read that Jones’ ancestors include Betty Washington Lewis, a sister of president George Washington, and Edward I of England, and I loved that Vulture interview he gave earlier this year, and particularly an implication that Jones had enjoyed some kind of intimate contact with Ivanka Trump. But I had no interest in seeing Alan Hicks and Rashida Jones‘ Quincy, as I don’t enjoy kiss-ass portraiture as a rule. The first 44 seconds of the trailer are suffocating in this regard.

I would love to sit down with the 85-year-old Jones for hours and hours and listen to his stories, but his friends need to give that “oh my God, what an awesome, genius-level talent!” shit a rest…no offense.