Last April I read a 2017 draft of Adam McKay‘s Vice, the Dick Cheney movie. (The script was called Cheney when McKay typed the title page; it was later called Backseat.) It struck me as a dark political horror comedy with a chuckly tone. A friend who read the same draft calls Backseat “a mixture of McKay, Deadpool and Armando Iannucci.”

One of the distinctive aspects of the ’17 draft were a couple of scenes in which Dick Cheney (Christian Bale) and his wife Lynn (Amy Adams) assess their situation in Shakespearean verse. I don’t recall if there were musical scenes in this draft but apparently one was shot.

In any event Vice (Annapurna, 12.14) research-screened last week in Los Angeles, and at least one guy who attended was enthusiastic.

“This is powerful political stuff,” he began. “A very didactic, matter-of-fact examination of Dick Cheney‘s empirical rise behind the scenes.

“McKay has removed the big comedic set-pieces from the film,” he added. “Missing from the new cut was an elaborate musical sequence and a substantial scene of Bale and Adams reciting Shakespeare. As it stands, the film still works. Now it’s just a more dramatic Big Short. It implements the same style of filmmaking (flashy editing and montage). Bale commits to a transformative performance, and Adams has two early volcanic scenes that can win her the Oscar. Steve Carell‘s Donald Rumsfeld is comic relief. And Sam Rockwell‘s George Bush is little more than a cameo — he appears in three scenes. Plays him as insecure and fragile as you’d hope.” 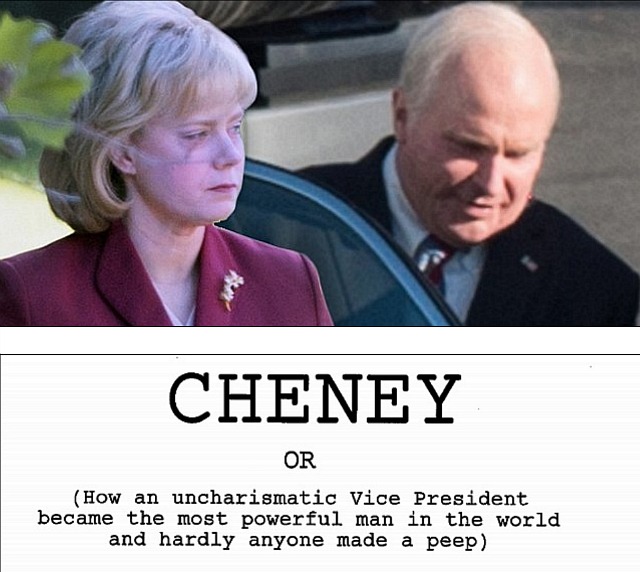 “Backseat apparently tested not long ago. A friend got wind of reactions and shares the following: (a) Amy Adams‘ performance as Lynne Cheney could win Best Supporting Actress. She may need an additional strong scene to clinch it, but she’ll definitely be in the mix; (b) Christian Bale, who plays Cheney, gives a committed, full-blooded performance; and (c) Sam Rockwell‘s George Bush only makes a few appearances but each time it’s a scene-stealer — apparently more of an impression than a performance, but it made a huge impact.”