I’m not saying all high-school girls are fickle and flighty, but a lot of them are. Or were, at least, when I was an awkward, insecure schlemiel.

In my senior year I had it bad for a great Irish blonde named Sally Jo Quinn. Or so she seemed at the time. Short, slender, magnificent blue eyes, straight blonde hair, smallish feet, slender hands with chewed nails. No dad at home; just her single mom who worked as an administrative something-or-other at the high school. I can’t recall if the parents had divorced or if the father had died or what.

All I could do was dream about putting the moves on Sally. She wasn’t entirely averse to my attentions as a couple of hot and heavy episodes did happen. Once in my car (i.e., my father’s train-station car) and once while lying on a bed of brown pine needles in a woodsy area near the town reservoir.

Will you look at the on-the-nose emotional triggers in this trailer? Right away you can smell the calculation, the family-friendly pablum, etc.

I haven’t time to write even a half-assed review of Julian Schnabel‘s Vincent Van Gogh film, At Eternity’s Gate, but it does deliver an intimate channelling of the visions and torment that surged within this angst-ridden impressionist, and the effect is fairly on-target. The film is more into communion than visions — intuitions, intimacy, revelations.

As Schnabel said during the post-screening press conference, “Rather than a movie about Van Gogh, I wanted to make a film in which you are Van Gogh.” He’s more or less done that, I feel. Which pretty much says it all.

Is Willem Dafoe‘s performance as Van Gogh the best thing he’s done since The Last Temptation of Christ, which was 30 friggin’ years ago? I’d say so, yeah. Dafoe seems to be so open to the ache of this poor man, and immersing himself so completely in his emotional, artistic and spiritual struggles, that (I realize I’ve said this a few times over the years) he really doesn’t seem to be performing or pretending. I wish I could think of some other way to say this, but whatever.

The interesting part is that Dafoe, now in his early 60s, is 25 years older than Van Gogh was when he died at 37, and yet this isn’t a problem. You don’t even think of it. Poor Vincent was so bothered and self-flagellating that Dafoe looking somewhat older than a guy in his mid 30s…well, of course.

The other thing is a scene in which Van Gogh, temporarily incarcerated in a mental asylum, has a somewhat testy conversation with a doubting priest (Mads Mikkelsen). The priest is softly contemptuous, saying in so many words that he thinks Van Gogh’s paintings simply aren’t very good, and that he’s almost certainly deluding himself by thinking that God meant him to pick up a brush. 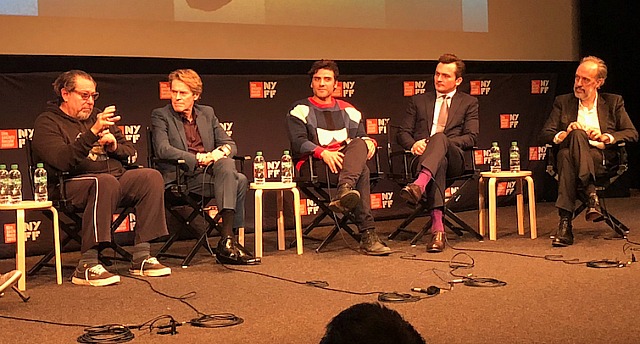 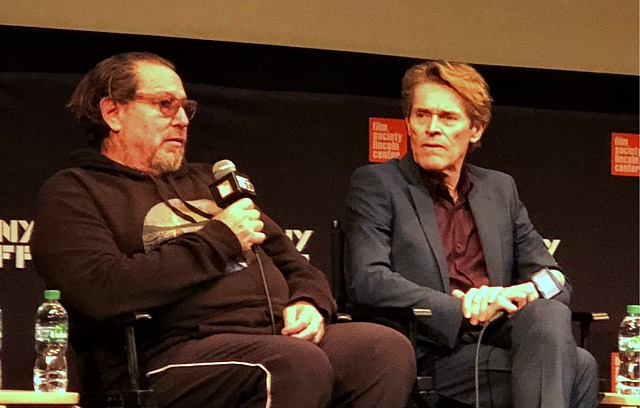 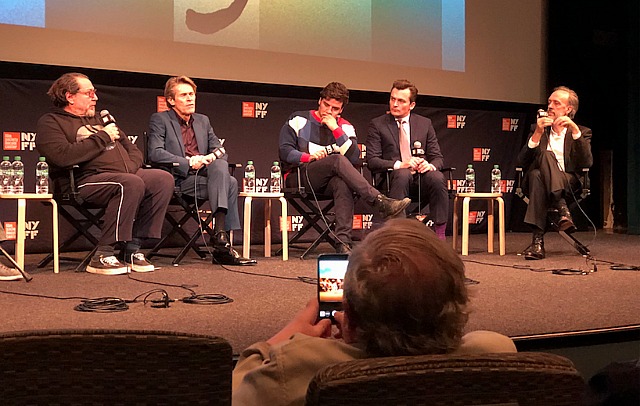 23 Comments
Wolves Of The Black Forest

George Clooney remarks at Variety’s Power of Women event in Los Angeles: “When you call an entire religion your enemy, you might very well make an enemy out of an entire religion. When you tell a whole race of people that you value them less, you can’t be surprised when they question your values. When you tell women that coming forward to testify about their abuse is a joke, don’t be shocked when they’re standing on your lawn, laughing on November 7.

“After all the jokes and insults and reality show frenzy, what will be remembered, what will stand the test of time, is holding responsible these wolves in wolves’ clothing.”

HE to Clooney: I hope you know something I don’t. I hope that the blue wave turns out to be as real and formidable as many of us hope. Thing is, an awful lot of women voted for Donald Trump two years ago, and there were even a fair number of Trump Hispanics that turned out. People think and behave in amazingly stupid and lazy ways. Just when you think they can’t get any dumber, they defy your expectations. Here’s hoping things work out for the better. 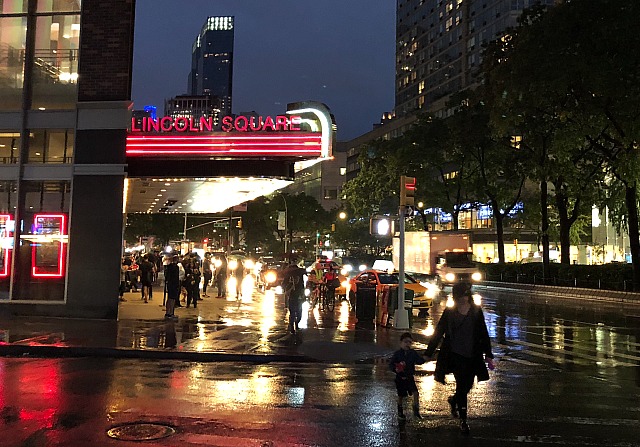 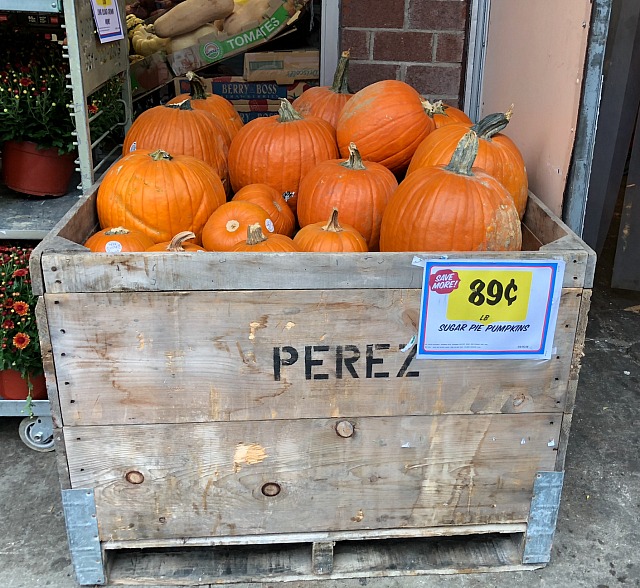 I know the territory to some extent. I’ve been to Arles. I’ve stood inches away from some of Van Gogh’s paintings at the Musee D’Orsay. I’m very familiar with the Montmartre apartment building that Vincent and Theo shared in 1886 or thereabouts. I’ve seen Vincente Minnelli‘s Lust for Life a couple of times. All of it, the whole Van Gogh ride, all my life.

I don’t want to deal with James McAvoy again. Really. Willis and Jackson, whatever, but please, not McAvoy….please. Universal will nonetheless open Glass on 1.18.09.

Studio boilerplate: “Following the conclusion of Split, David Dunn (Bruce Willis) pursues Kevin Wendell Crumb’s (James McAvoy) superhuman persona of The Beast in a series of escalating encounters while the shadowy presence of Elijah Price (Samuel L. Jackson), going by ‘Mr. Glass’, emerges as an orchestrator who holds secrets critical to both men.”

I’ve said this a couple of times, but now that Damien Chazelle‘s First Man has begun its commercial run, please try and catch it in a real IMAX theatre. The moon landing sequence at the end is 40% to 50% better on an IMAX screen, I swear.

Key HE observation: “Chazelle’s film operates so closely to the personality of the low-key Neil Armstrong that to some it feels chilly and remote-feeling and a little too tech-heady. But this isn’t a problem for me at all.

“One thing I really like about First Man is Chazelle’s refusal to do the Ron Howard thing by cutting to wide or establishing shots for standard perspective’s sake. Instead Chazelle keeps us inside the cockpit seat alongside Neil almost the whole time. And Ryan Gosling‘s subdued, often muted performance is actually daring in its own way — he’s delivering the full emotional boatload but in spare, somber, minimalist fashion.”

To hear it from The Limey‘s Terry Valentine (i.e., Peter Fonda), 1966 was the only year in which “the ’60s” were fully in flower. There were countless manifestations — spiritual, creative — and hints of coming disturbances. April ’66 saw the famous Time magazine cover that asked “Is God dead?”, which was used by Roman Polanski during the filming of Rosemary’s Baby a year later. The following month saw the release of Bob Dylan‘s Blonde On Blonde (and the coughing heat pipes in “Visions of Johanna”) and Brian Wilson‘s Pet Sounds, and three months later Revolver, the Beatles’ “acid album” which turned out to be their nerviest and most leap-forwardy, was released. All kinds of mildly trippy, tingly, unnerving things were popping all over.

But you’d never guess what was happening to go by the mood, tone and between-the-lines repartee during the 39th Oscar Awards, which honored the best films of 1966 but aired in April ’67, or roughly seven weeks before the release of Sgt. Pepper. Bob Hope‘s opening monologue is punishing, almost physically painful to endure. And look…there’s Ginger Rogers!

What 1966 films play best by 2018 aesthetic standards? Certainly The Sand Pebbles, which should have won Best Picture, and which contained Steve McQueen‘s most open-hearted, career-best performance. The second best ’66 film by my yardstick was and is Michelangelo Antonioni‘s Blowup (that London-based film completely absorbed and reflected what was going in in late ’65 and ’66). The third finest was Richard Brooks‘ The Professionals, a crafty, ace-level western actioner that plays beautifully by today’s measure and which contains Lee Marvin‘s second-best performance (after “Walker” in ’67’s Point Blank).

Other ’66 hotties: Mike Nichols‘ Who’s Afraid of Virginia Woolf?, Lewis Gilbert‘s Alfie, John Frankenheimer‘s Seconds and Grand Prix, Milos Forman‘s Loves of a Blonde, Billy Wilder‘s The Fortune Cookie, Norman Jewison‘s The Russians Are Coming, the Russians Are Coming, Claude Lelouch‘s A Man and a Woman, Gille Pontecorvo‘s The Battle of Algiers, Richard Lester‘s A Funny Thing Happened on the Way to the Forum, Pier Paolo Woody Allen’s What’s Up, Tiger Lily?, Pier Paolo Pasolini‘s The Gospel According to St. Matthew, Karel Reisz‘s Morgan!, or a Suitable Case for Derangement.